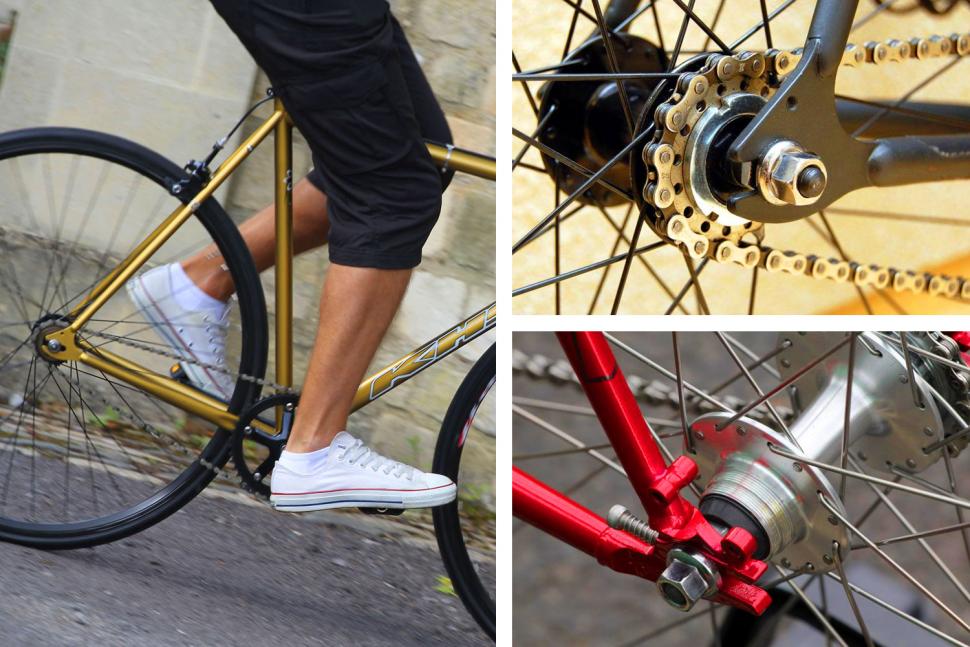 What's a fixed-gear bike good for? Should you buy a fixie?

In praise of ultimate simplicity
by John Stevenson

Variously known as fixed-wheel bikes, fixed-gear bikes or just fixies, these are bikes derived from the machines used for track racing on velodromes. Their key feature is that they have no freewheel mechanism, so if you're moving you have to pedal.

For a few brief months in about 2009 fixies were achingly trendy. But now the tragically hip have moved on, it’s time to reclaim the simplest bike style of all.

Almost all modern bikes have a freewheel, the ratcheting mechanism in the rear wheel that means you can stop pedalling and coast along. The earliest bikes were like modern fixies though, with just one gear ratio and no freewheel.

Today, the only place where fixies are common — compulsory, in fact — is in the velodrome, where the ‘keep it simple’ ethos of track racing demands a single gear and no brakes. 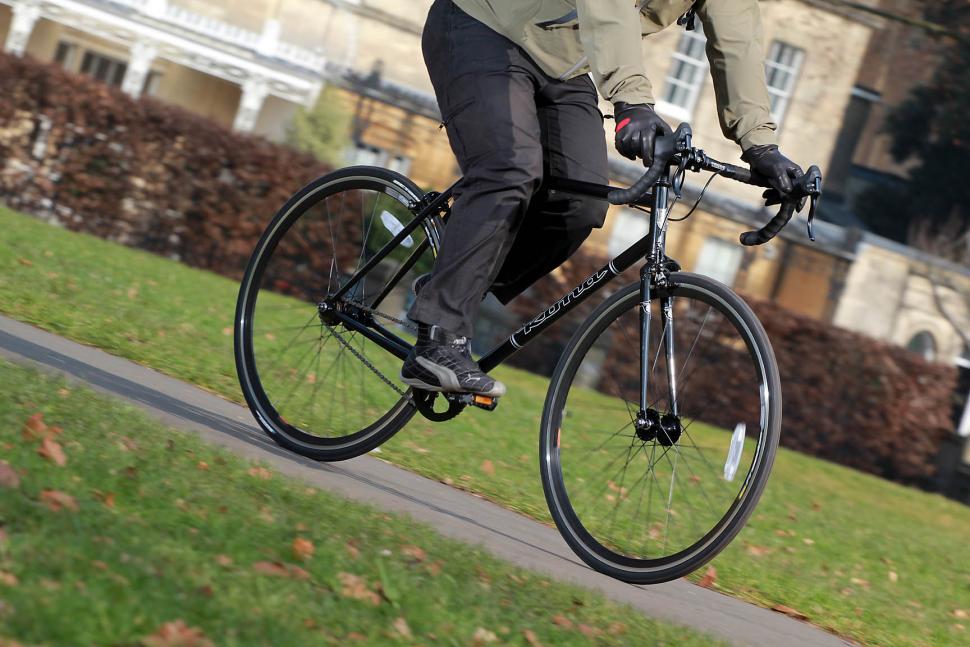 While they were trendy it seemed like fixies were everywhere, and large bike makers scrambled to add them to their ranges. But the hipsters rapidly discovered that a genuine fixed gear bike is not a trivial thing to ride, and flopped their wheels over to the freewheel on the other side.

That left fixies back with the riders who’ve treasured them for years: road cyclists who crave simplicity, and a handful of cycle couriers who love their almost-nothing-to-go-wrong character. 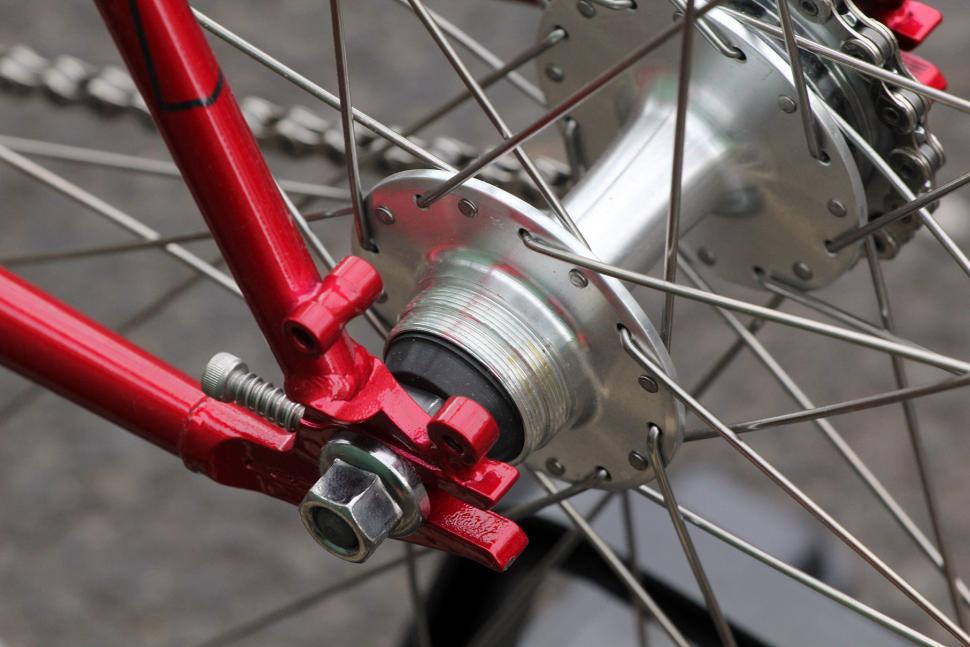 A typical fixie set up has a double-sided hub like this. There's a single freewheel on the far side and the dual thread nearest the camera takes a fixed sprocket and a lockring to hold it in place.

A road bike with, for our purposes, drop bars and a single fixed gear, and brakes. By law a bike on the road in the UK must have two brakes. Slowing the bike down by pushing against the pedals counts as a brake, but in an emergency you’re almost certainly going to forget that if you’ve been riding regular bikes for a few years. Best to stick with the stopping you’re used to. 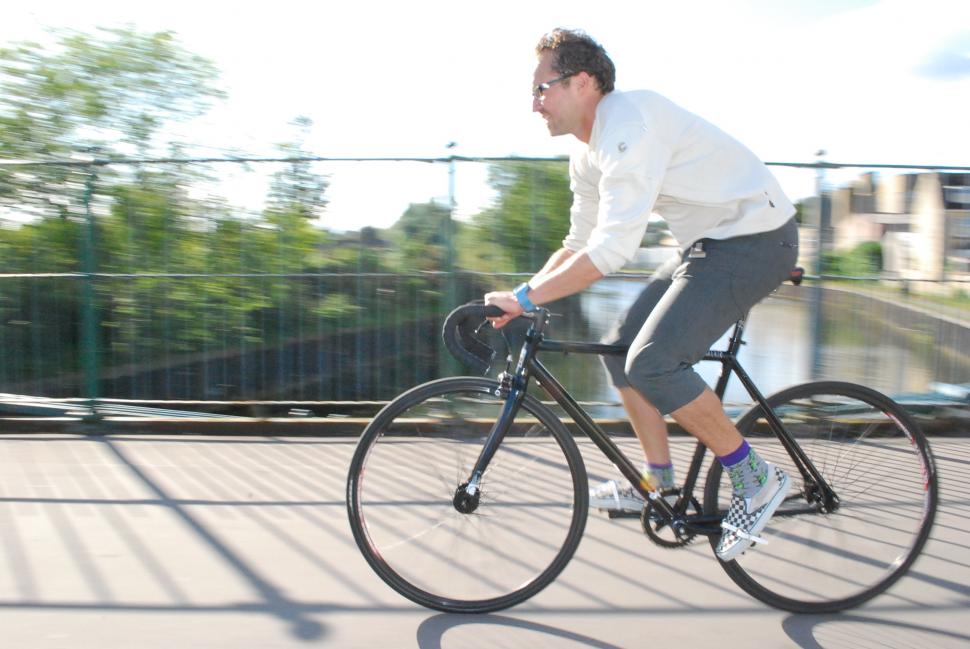 Familiarity is the reason for sticking with drop bars too, but there’s another. A trendy ultra-narrow flat bar on a fixie marks you as someone too daft to realise you still can’t ride through a 12-inch gap because your shoulders or hips will get stuck. Just say no.

What’s a fixed-gear bike good for?

Traditionally, a fixie was the quintessential winter bike, for two reasons. You’re always pedalling if you’re riding a fixed-wheel bike, so the theory goes that you have to work all the time — no freewheeling means no slacking. Riding a fixie means you make the most of your limited winter riding time.

The other reason for riding fixed in the winter is that water and salt is not exactly good for bike parts made from steel and aluminium. Derailleurs and freewheel mechanisms are especially vulnerable, so it makes sense to do without them. 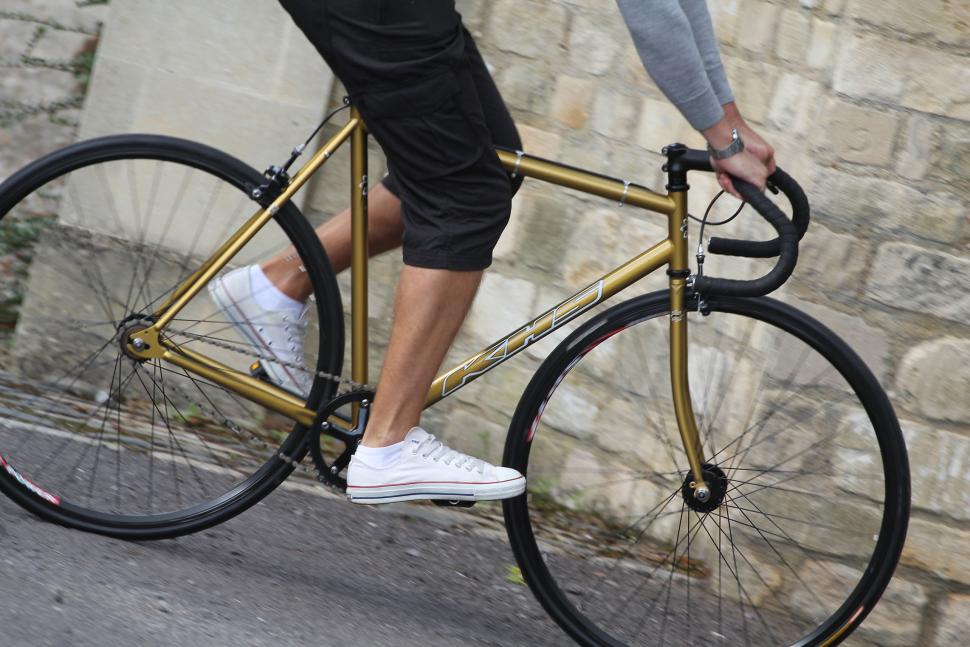 Modern derailleurs seem to be more weather-resistant than those of the 60s and 70s, and they’re substantially cheaper, so this is less of a problem than it once was. Nevertheless, a bike that doesn’t need much maintenance over the winter is appealing if you have to work on your bike in a cold garage or shed or outside on the patio.

Fixed-gear bikes make great winter bikes, but they’re also excellent urban rides, provided you don’t have to tackle any long, steep hills. The lack of shifters means there’s one fewer distraction, and the ability to control your speed directly through the transmission gives you a useful extra degree of control. 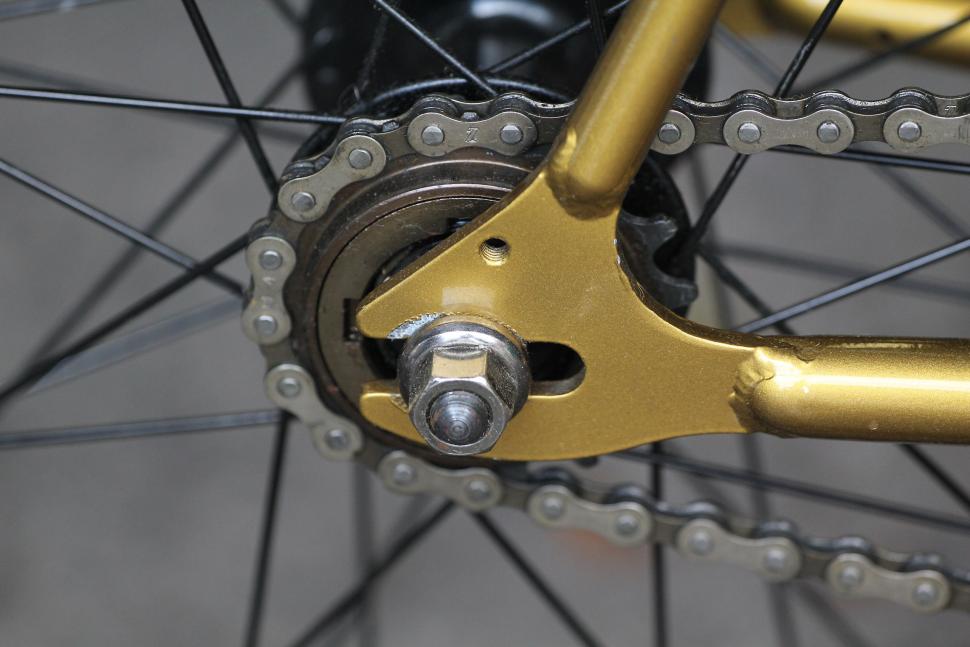 Learning to ride a fixie takes time though. I’d been using a fixie to commute for a few days when I had probably the stupidest crash of my life. Approaching a red light I stood up to coast to a halt, ready to track-stand. Well, you can’t coast to a halt on a fixie, and as I straightened my knees the bike spat me down the road on my arse.

Fortunately it was wet, so I slid along the road without leaving too much skin behind, and there was nothing motorised behind me. A salutary lesson, though, and a mistake I didn’t make again.

The real joy of riding a fixie is the feeling of direct connection with the bike. Yes, I know fixie enthusiasts tend to wax evangelical about this, but that’s for a good reason: it’s true.

There’s something almost mystical about being intimately connected to the transmission and rear wheel on a fixie. You’re physically engaged with the bike in a way that just doesn’t happen with a freewheel. That unavoidable pedalling imperative focuses your attention on staying smooth and fluid, especially as your speed increases. You can’t afford to be choppy if you’re doing 25mph in a 65-inch gear.

It’s debatable whether developing a smooth pedal stroke is an aim worth pursuing in itself, but if it’s important to you, riding a fixie is a great way to get smooth.

There’s a school of thought that says the greatest road-going fixies start life as classic steel road bikes with horizontal dropouts, found on eBay, Gumtree or the dusty backrooms of long-established bike shops, or as similarly vintaged track frames with brakes added. But if you don’t have the time and patience to build your own, there are plenty of brands that will sell you a fixie that’s ready to roll. To give you a taster, here are three of them. 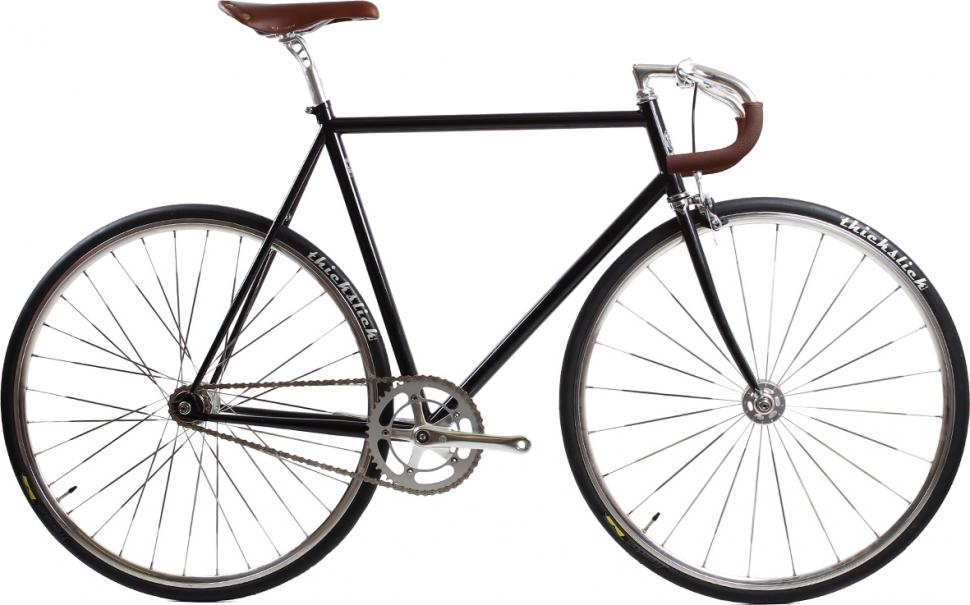 London's Brick Lane Bikes has long been a driver of UK fixie culture. Their own-brand fixie has a double-butted chromoly steel frame and a handsome parts selection in mostly plain aluminium for a classic look. If you set out to build a winter fixie, you’d likely end up with something very similar to the handsome Flyer which comes equipped with full-length mudguards to fend off the wet. For commuting use, there are rear rack mounts too. 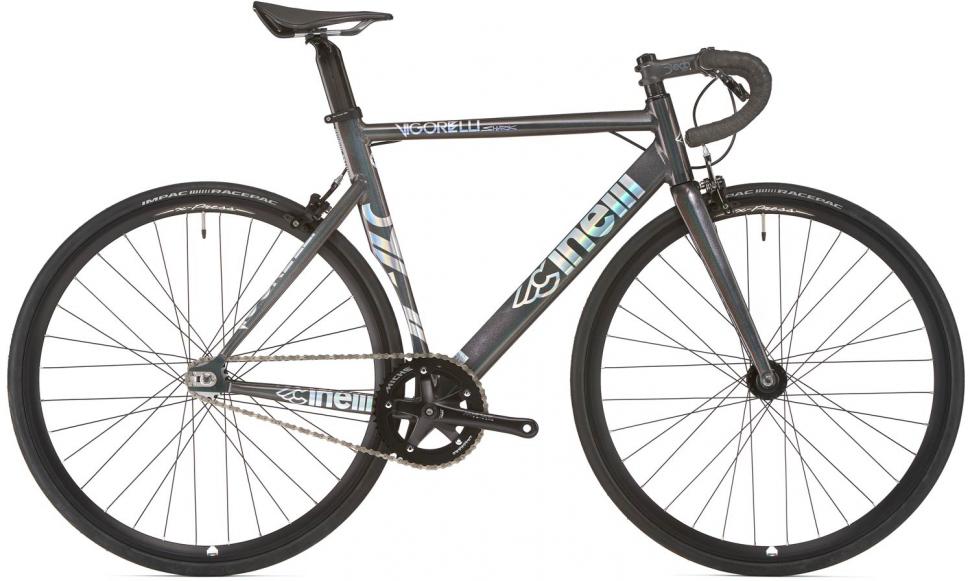 From the ‘very Italian, very stylish’ school of bike design, Cinelli’s Vigorelli Shark is a go-faster fixie with a high-quality Columbus aluminium frame.

The frame is very much a track unit with a steep seat angle, so if you wanted to strip it down it’d be easily adapted for the velodrome.

Explore the complete archive of reviews of fixed and singlespeed bikes on road.cc