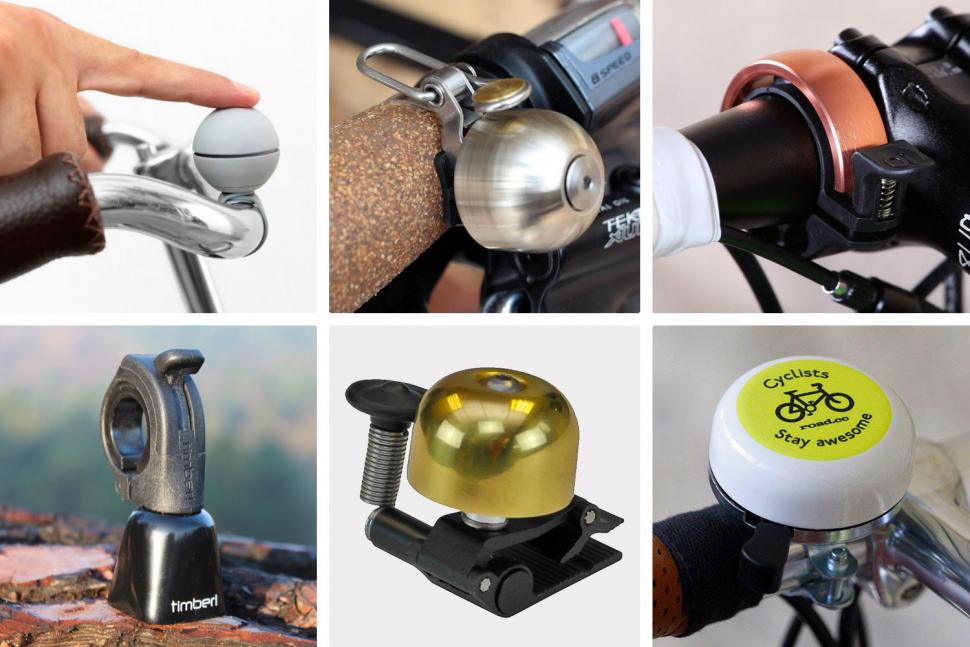 Let people know you're there with a friendly 'ching!'
by David Arthur @davearthur

A bicycle bell is the traditional way of letting other road and cycle path users know that you're there and it's doubly useful when there are lots of people on foot about. Bells may not be glamorous, but they're having a bit of a renaissance as accessory makers come up with bells that are more reliable and look and sound better. Let's take a look.

Welcome to the latest edition of road.cc’s buyer's guide to bells in which you’ll find everything you need to know to find the right bell for you, plus our pick of 12 of the best bells. Cha-ching!

“Where's your bell?!” It’s a line you’ve probably heard many times, usually after you’ve shouted a cheery hello. But do cyclists have to have bells? In the UK a bike has to be sold with a bell fitted, but there’s no legal obligation to keep it on your new bike once you get it home from the shop. Other jurisdictions have different rules. In New South Wales, Australia, under its legal principle of Treat Cyclists As Vermin So They Stop Riding, you can be fined AU$106 (£57) for not having a bell.

The Highway Code only recommends a bicycle bell be fitted. “Be considerate of other road users, particularly blind and partially sighted pedestrians. Let them know you are there when necessary, for example, by ringing your bell if you have one. It is recommended that a bell be fitted.”

Bicycle bells can be a sensible addition to your bike though, whether cycling along shared-used paths or quiet country lanes with horse riders and dog walkers that might not hear a cyclist approaching.

If you do want to fit a bicycle bell, there are now many choices on the market as plenty of bike brands have responded to the challenge of designing a compact and stylish bell that is highly audible. Here are 12 to consider.

The Trigger Bell is a small but very well-designed bell that works on a very broad range of handlebars, intended to allow you to work the bell without moving your hand from where it naturally sits to operate the brakes and gears. Effective and good value, it sets a high bar for other bells to reach.

Read our review of the Trigger Bell 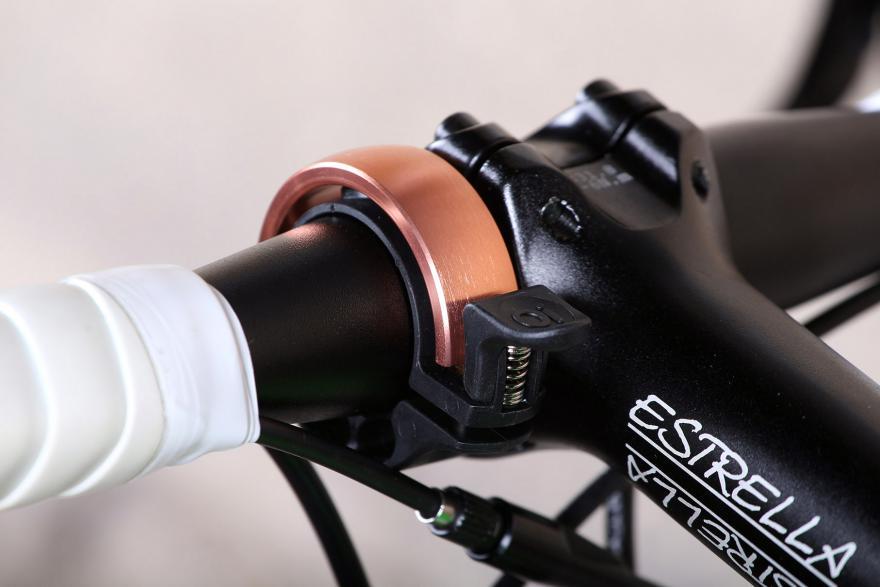 The Oi is possibly the least bike-bell-looking bell ever. Launched via Kickstarter to much fanfare, the Oi bell takes a different tack to the usual bicycle bell design. The wraparound design ensures it's stylish and unobtrusive on the handlebars, and the hammer is easy to activate when cycling along. 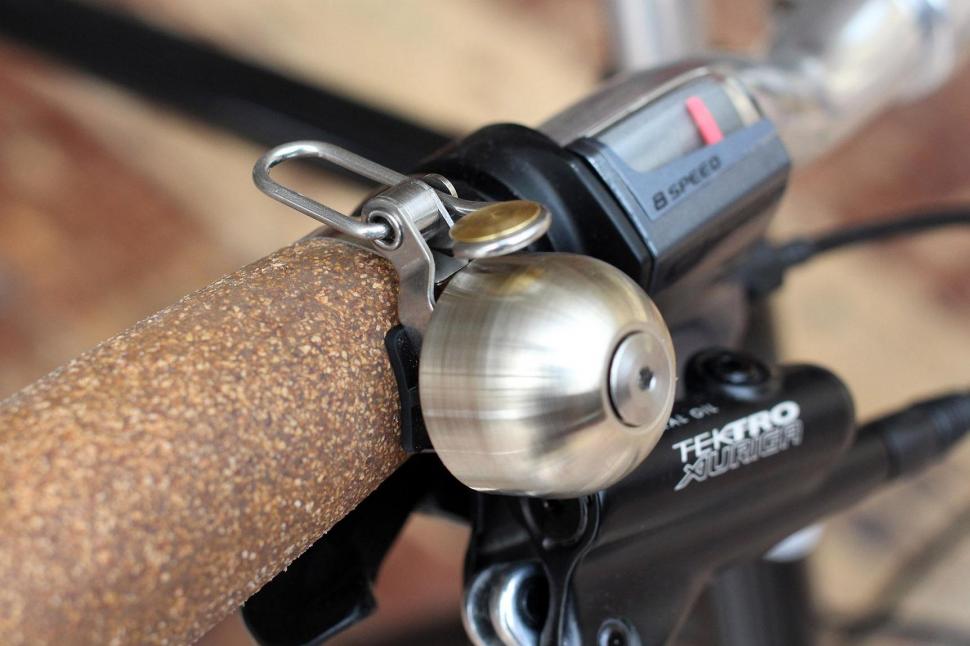 Made in the US, the Spurcycle is the second most expensive bicycle bell we’ve ever come across. Like the Knog Oi, the Spurcycle was successfully funded through Kickstarter. It’s an all-metal design with a metal strap fitting to any diameter handlebar and uses a brass dinger to create a sound that the manufacturer says is three times louder than a conventional bell.

We found the ring the ring to be really impressive, clearly cutting through external noise and resonating well after the hammer hits. It even managed to get the attention of people listening to headphones, which is something that doesn't happen too often with a regular bell. According to a sound meter phone app, the ring was consistently between 88-100 decibels, which is certainly enough to get people's attention.

Read our review of the Spurcycle bell
Find a Spurcycle dealer 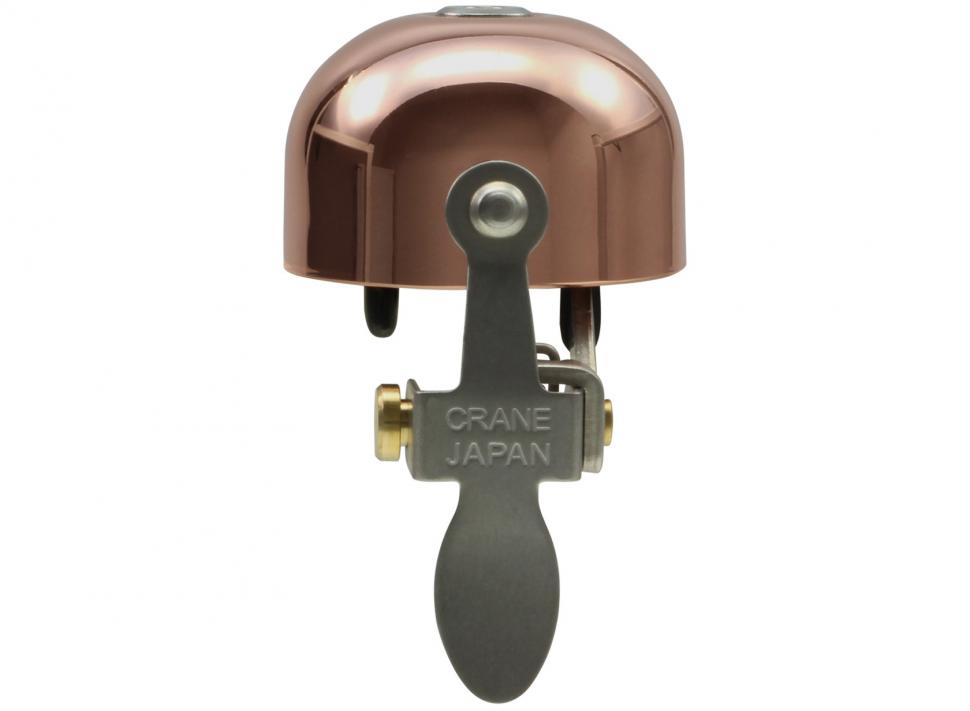 This elegant bicycle bell is compact and available in a choice of colours, including matte black, polished brass or silver. It uses a vinyl coated stainless steel band to secure it to any handlebar between 22 and 31.8mm diameter. Crane bells come from Japan and are renowned for their musical tone and sustain. 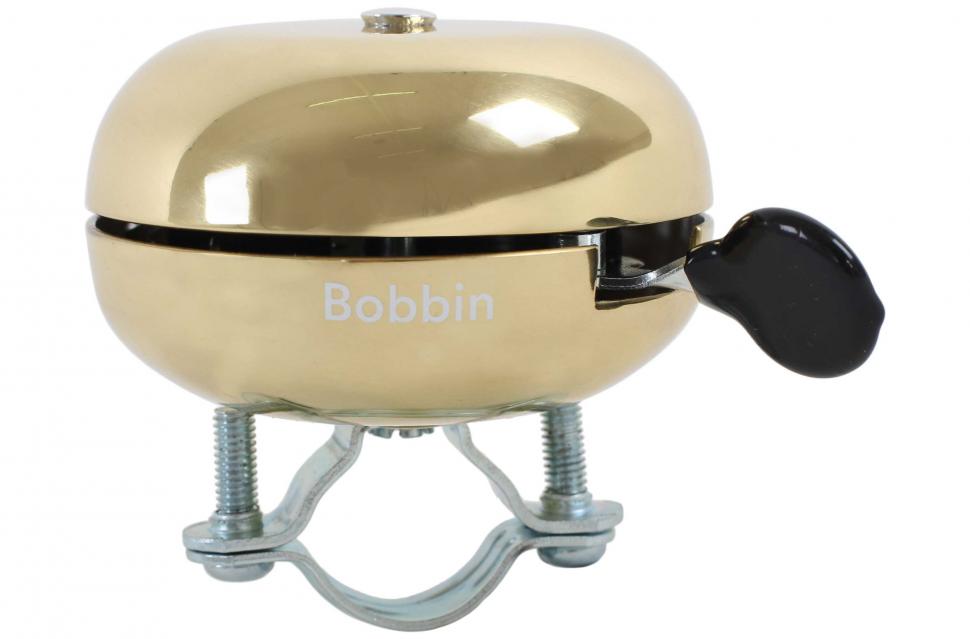 Usually sold with Bobbin Bicycles but available to buy separately, this is a classically-styled bell that will suit any vintage town bike. It uses a conventional ring paddle and sounds like a traditional bicycle bell should. 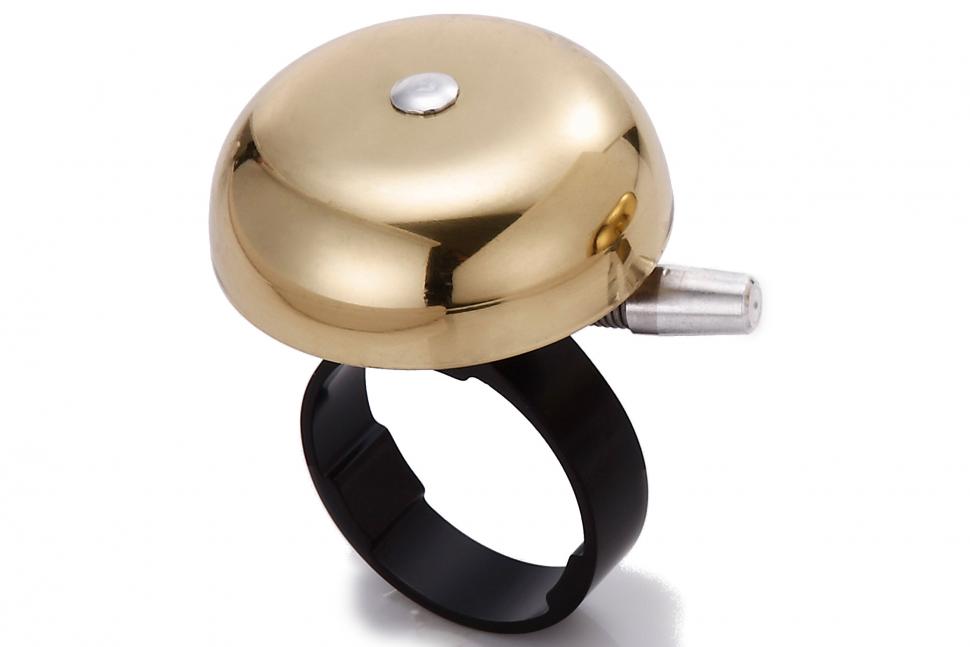 If you don’t have space on your handlebar to fit a bicycle bell, this clever Acor Headset Spacer Bell could be the perfect solution. It simply replaces a 10mm spacer above or below your stem and will fit a 1 1/8in steerer tube. 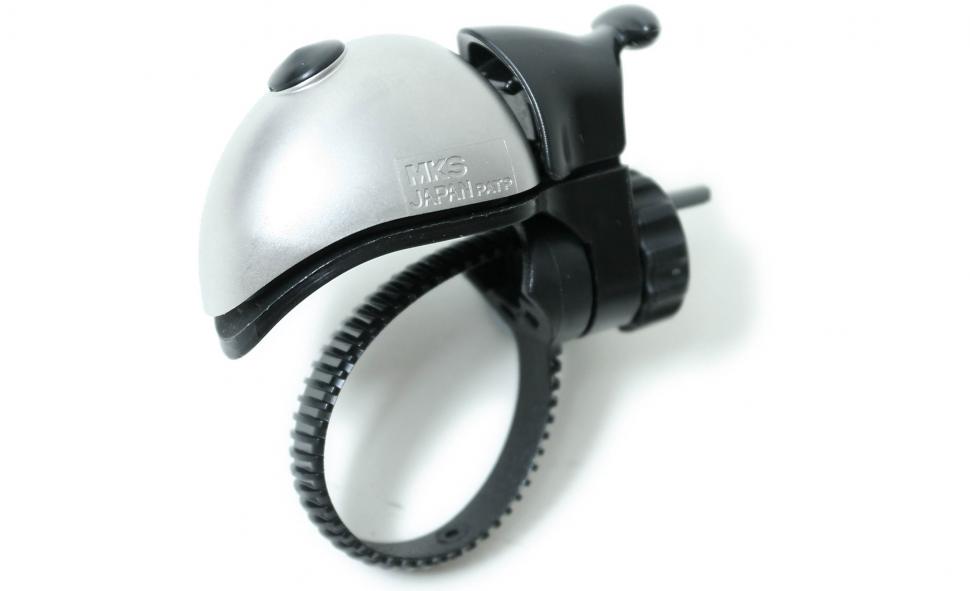 Got an aero bike and don’t want to fit a bicycle bell because it might generate unwanted drag? Here’s the MKS Aero Bell which has an aero shape. It has a simple aluminium body with a plastic ratchet strap to fit the handlebars. A titanium version costing £95.97 is also available. (Amazon seems to be currently the only source of these bells so Amazon's algorithms have gone bonkers and whacked the prices into low Earth orbit; we'd wait till prices come down.) 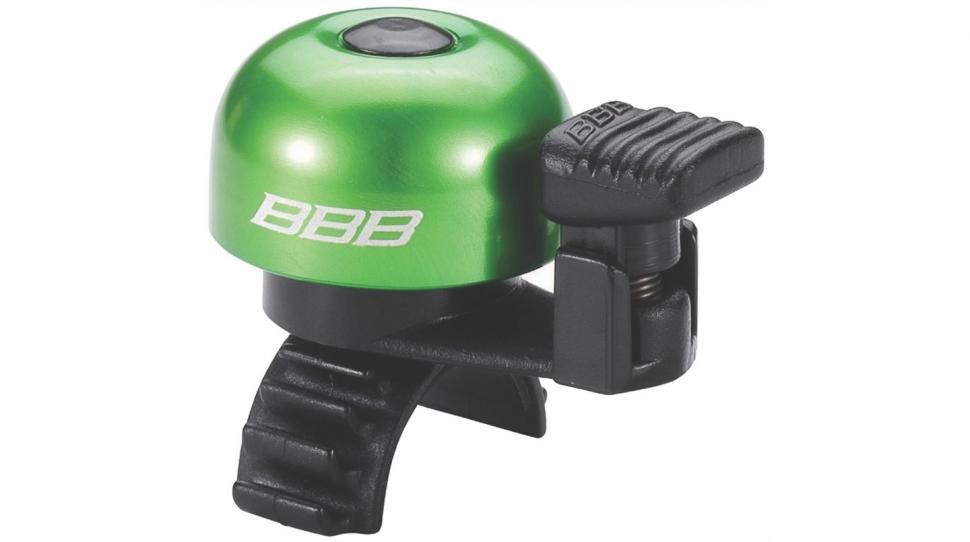 If you want a simple and cheap bell, the BBB EasyFit Bell doesn’t require any tools for installation. Instead, you get a selection of rubber bands to wrap around any size handlebar. At around a fiver it’s one of the most affordable bicycle bells in this roundup. It comes in a choice of colours to match your bike. 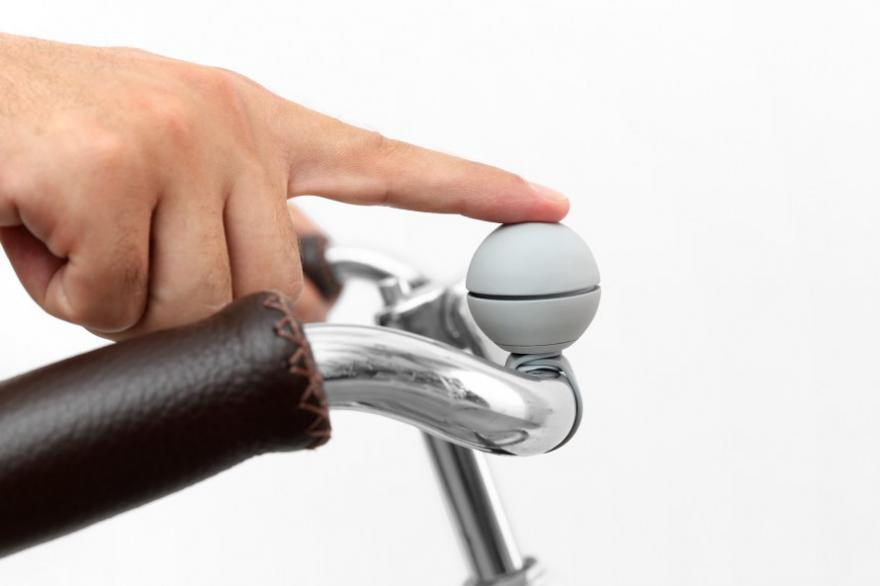 Created by a Milan-based designer, the Nello is a magnetic bicycle bell that is apparently capable of emitting 90 decibels of sound with every ring. It’s a pretty little thing and fixes to the handlebars using a magnet and plastic bracket, so it’s easily removed. Unlike most bicycle bells, this one is powered by batteries and there’s no manual dinger, instead, you simply tap the top of the bell.

Not requiring any tools for installation and not hogging any valuable handlebar space, this bicycle bell uses an adjustable clamp that can be secured onto a gear or brake cable, providing a wide range of fitting positions. 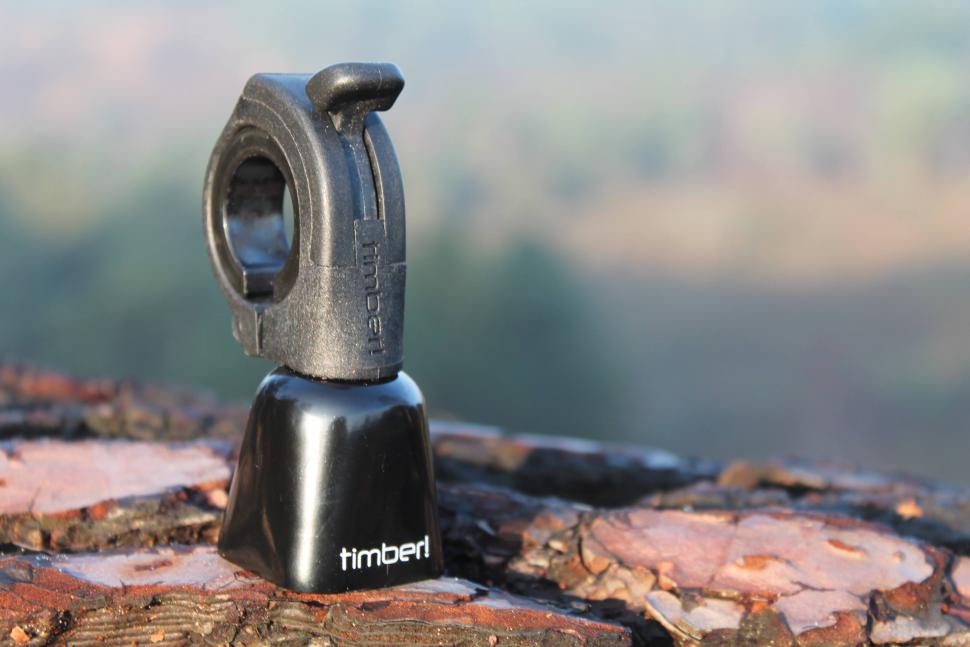 The Timber! Mountain Bike Trail Bell, to give it it's full name, makes a pleasant chiming noise all the time. It's designed for mountain biking to alert other trail users, but we can see the Timber! being useful for adventure and cyclocross rides, round-town where there are lots of pedestrians, or on shared-use paths. It’s unique in that it can be switched off to keep it silent, or “unlocked” via a plastic lever on the top to allow a steel ball to ding in the cowbell-inspired cup. When it’s unlocked the ball will move freely provided you’re riding over rough ground, or if you give the handlebar a shake. 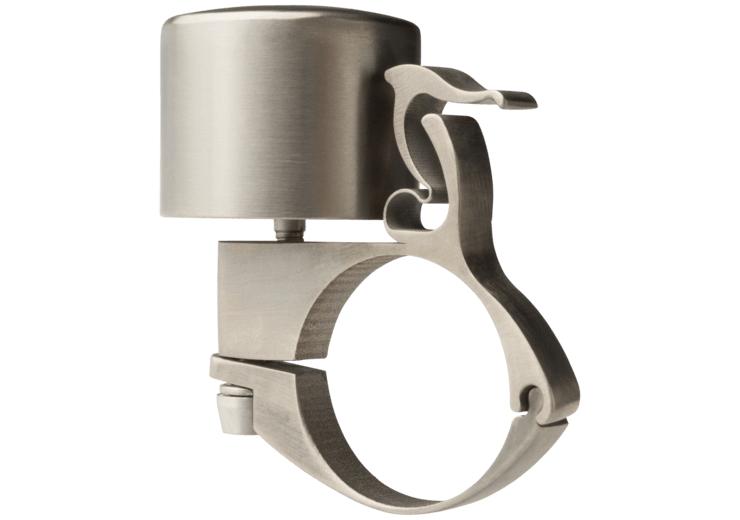 If you want to add a bit of titanium bling to your bike look no further than the Van Nicholas titanium bell. It would go well with a matching Van Nicholas bicycle but we reckon it’ll look good on most bicycles. It’s available in 22.2 and 31.8mm diameters.