The Continental Contact Speed Reflex is a fast-rolling 'all roads' commuter tyre with a racier pedigree than many. Quick rolling, grippy and compliant, it's also available in a wealth of sizes and widths, from 20in through to 700C. The 'micro-diamond' tread pattern extends to the skinwall sidewalls, for additional protection, and theoretically permits the use of old school bottle dynamos.

I'm told the 180tpi (threads per inch) casings are designed for speed and comfort. The skinwall sidewall also contributes to this; traditionally, commuter models tend to employ gumwall, which is much beefier and therefore less prone to sidewall damage. Skinwall sidewalls do require more stringent adherence to recommended pressures. The sidewalls are also retro-reflective on this model.

The tread pattern apparently mimics that of Continental's Competition World Tour Tubular tyre and continues the speed narrative, while supposedly hugging the road and maintaining traction over wet, greasy and muddy stretches – the sort common to country lanes. 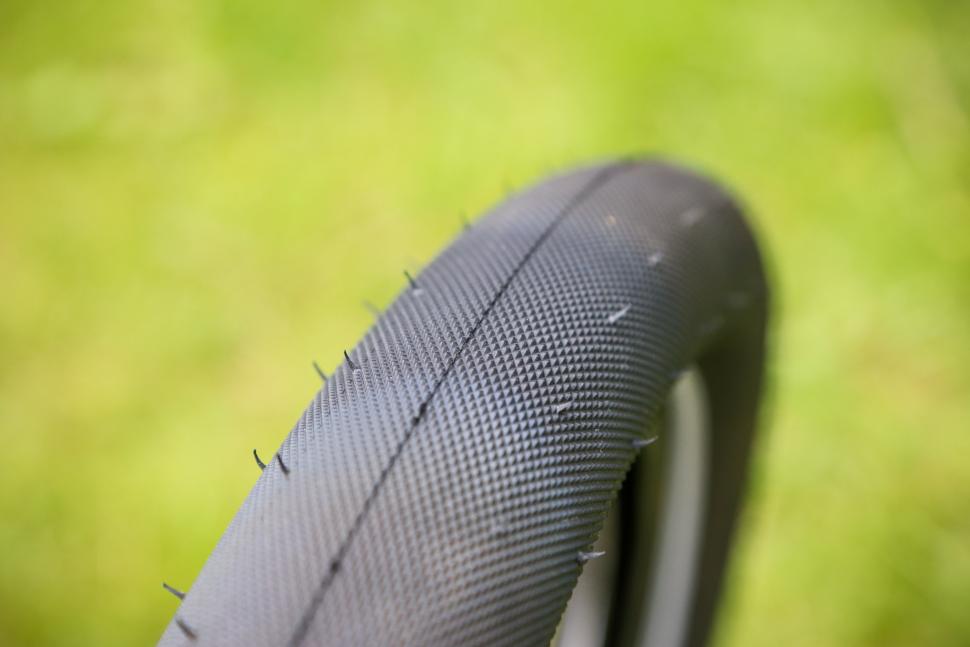 Speed is one thing, but puncture resistance/reliability are also important. Puncture resistance is rated 4 (out of 7) and comes courtesy of a combination of Continental's 'hard wearing tread compound' and Safety System. The latter basically refers to Kevlar puncture-repelling layers beneath the tread.

In terms of pressures, these 26x2.0 models are designed to be run between 45 and 58psi. 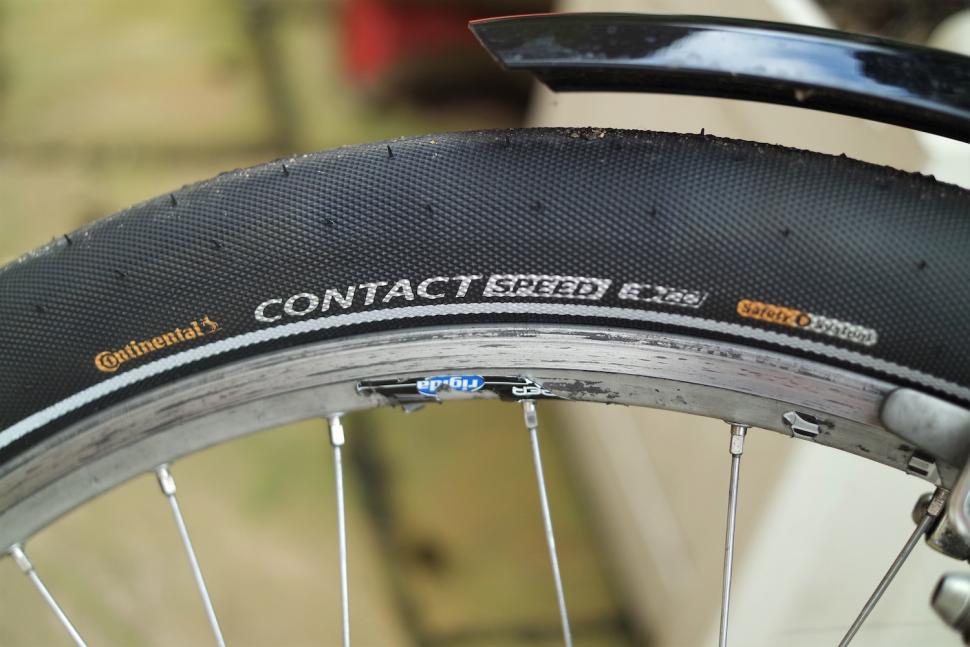 I've been a hub dynamo devotee for many years now but those still wanting to run an old school bottle unit will be pleased to hear the Contact Speeds are compatible.

My rough stuff tourer is based around a late 90s chromoly, cross-country mountain bike frameset and 26inch wheels, so these Contact Speeds were an obvious fit. Normally, it sports Schwalbe Marathon Mondials, which are surprisingly sprightly for rubber also designed to tackle unmade roads and dirt tracks, but I've been tinkering with the gearing (better mid-range) and a bit more speed/lower rolling resistance on metalled roads would be most welcome.

The relatively supple compounds translate into a compliant ride, ironing out battle scarred tarmac and bigger lumps very effectively – great news when thundering through town, where it's not always possible to swerve holes. I've tended to run them at around 50-55psi and though I'd never suggest they're a good choice for gravel and other mixed terrain riding, I've taken them along the unmade roads I often tackle with the Schwalbes and been pleasantly surprised by their supple tenacity on wet, silty surfaces. Admittedly, I didn't push things beyond 16-17mph (tackling the same routes with the Schwalbes, I can get 22-23mph). In common with other semi/slick patterns I've used for several thousand miles, including Panaracer's Ribmo and Tioga's City Slicker, their round profiles mean the centre strip collects a scuzzy, silty patina and, with it, flints, glass and other sharps. It's nothing serious, but it's worth giving the casings periodic, post-ride brush-downs to prevent these burrowing their way inside, causing a flat.

Since we're on the subject, I've not punctured during the test period, but much of this boils down to luck and the fact they're still very new. All things being equal, slicks featuring similar puncture-thwarting technology only start succumbing once their casings have racked up a few thousand miles.

If you do puncture, a single resin lever was all I needed to scoop the bead from my rims (packet-fresh); none for plopping the beads on, which is another plus. 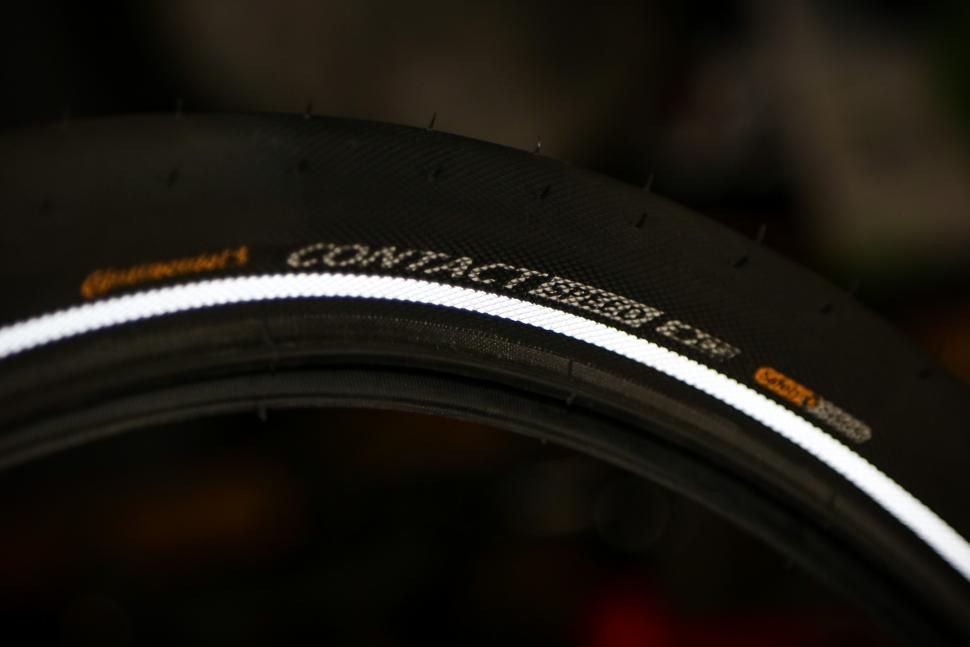 Back on the tarmac, the supple, compliant nature makes for very predictable handling and while the first heavy rains can leave manhole covers and other ironworks decidedly sketchy, I've never had any issues, even when towing my trailer.

As the miles have crept up and there's been a liberal mix of conditions, I'm of the opinion that the Contis' blend of speed, comfort and good manners would make for decent lightweight/weekend touring rubber. Belting down 1-in-7s with trailer and 20 kilos of kit, I've wound things up to 30mph with complete confidence, the Contact Speeds holding their line impeccably into the winding bends.

Their 1.6 or 1.3in section siblings might have the edge if you really wanted to go like the clappers, but I prefer a bigger pocket of air. Nonetheless, they live up to their Speed moniker.

Even allowing for the test bike's moderate (34-89 inch) gearing, little effort is required to coax them up to speed, which is great for pulling away at the traffic lights, overtaking slow moving farm traffic, or catching a fellow rider napping. Otherwise, I've happily cruised along, reflecting on the world, at 18-20mph.

How durable they are is difficult to say at this stage, and some folks are just harder on kit than others. That said, it's worth remembering there will be some trade-off between speed and longevity. Anecdotally, I've heard the Contact Speeds have been good for 3,500 miles plus (rear), and 5,000 up front.

After 600 miles there's little sign of wear, let alone cuts or similar damage, and I've ridden through hedge clippings and shards of glass – some deliberate, some unavoidable.

For all their considerable charms, £34.99 is a very competitive price point.

Tioga's City Slicker is perhaps showing its age in terms of puncture-repelling spec – no belts here – and the 60tpi casing won't be to everyone's tastes though they're surprisingly quick and compliant, but they're available in 26x1.0 through to 26x1.95 (and a 700x32 version, which I spent a year hustling on the lanes with and only punctured twice) and are £26.95 apiece.

Panaracer's Ribmo, which Dave tested back in 2013, is also listed in a wide range of sizes and features bead to bead puncture-repelling strips. It has 'water channeling grooves' for those who prefer the visual assurance of a tread pattern, and weighs in at £29.99 for wire bead, £34.99 folding. However, wet weather bite and cornering prowess does not rival the Continentals and the sidewalls aren't designed for bottle dynamos either (if that's important).

Schwalbe's Marathon Supremes have served me and said tubby tourer phenomenally well for several years, though they have a much higher list price.

For me at least, the Contact Speeds strike an excellent balance between speed, comfort and puncture resistance – in that order. The wide range of sizes is another big draw and I'd even do a bit of weekend/lightweight touring with them. If these are your priorities, there's little to touch them. However, if you put reliability and durability over everything else, there are plenty of options for similar money and, indeed, less.

Quick, compliant tyres for those willing to trade some durability and puncture resistance

Continental says: 'This super fast looking city slicker turns any bike into a racer, helping bike messengers meet those tight deadlines or fitness riders who require a faster tyre than the original knobbly tyres that their bike was supplied with.

'Puncture protection and reliability is taken care of thanks to Continental's renowned hard wearing tread compound and two SafetySystem anti puncture layers beneath the tread.

'An improved 180 tpi (threads per inch) nylon casing increases speed and comfort. This is because the finer casing material deforms more quickly around imperfections in the road surface compared to a lower tpi casing. This feature also improves puncture resistance.

'The CONTACT Speed also features a 'skinwall' sidewall. Most city/trekking tyres use a 'gumwall' meaning lots of rubber in the sidewall to improve sidewall puncture resistance. A skinwall sidewall is much faster than a gumwall but just a little forward thinking is needed to avoid scuffing kerbs and to always maintain the minimum recommended tyre pressure.

''Micro-diamond' tread pattern rolls fast yet grips on loose debris covering road surfaces like grit, gravel or mud. Reflective sidewalls are an option for added safety and the CONTACT Sport is able to be used with dynamo lights."

It's a very sprightly and seemingly reliable commuter tyre.

Able to be used with dynamo lights

Well made and fast-rolling but I suspect there will be some trade-off between speed and durability.

Certainly live up to their hype on the speed front and also handle very well in the wet and across loose surfaces, though they are very much a tarmac tyre.

Difficult to comment longer term. However, the supple casings suggest speed and compliance take precedence over outright longevity and indeed, puncture resistance. Not that the latter has been an issue to date – surprising, given they rank 4/7 on the puncture-resistant front.

Good, for a tyre of this size.

Rate the product for comfort (if applicable)
8/10

Very compliant ride, even at the higher pressures.

They are very responsive, yet compliant, even at the higher pressures. Despite them falling into the company's lower-end for puncture resistance, I've had no flats to date (500 miles) although the weather has been relatively dry and fewer sharps have littered the roads. Thus far, they have shown an excellent balance of qualities and lived up to their hype.

Nothing per se. However, there may be a more obvious trade-off in terms of durability/reliability as the miles rack up.

Schwalbe's Marathon Supreme has served me phenomenally well for several years, but has a much higher list price.

Would you recommend the product to a friend? Yes, if they wanted a fast tyre for commuting and possibly lightweight touring.

An impressive blend of speed, comfort and reliability – a good tyre for those who want to blast along in comfort but are willing to accept some trade-off in terms of longevity and puncture resistance. 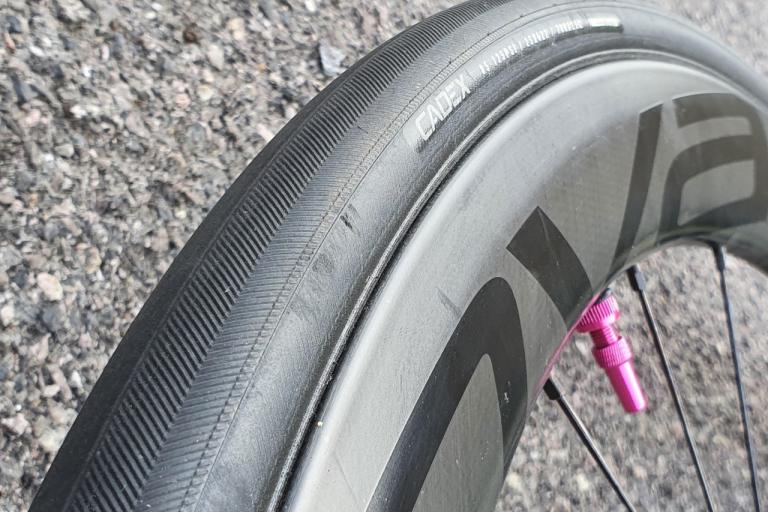 Premium tubeless road tyres that feel fast, grippy and wear well – but harder to fit than some 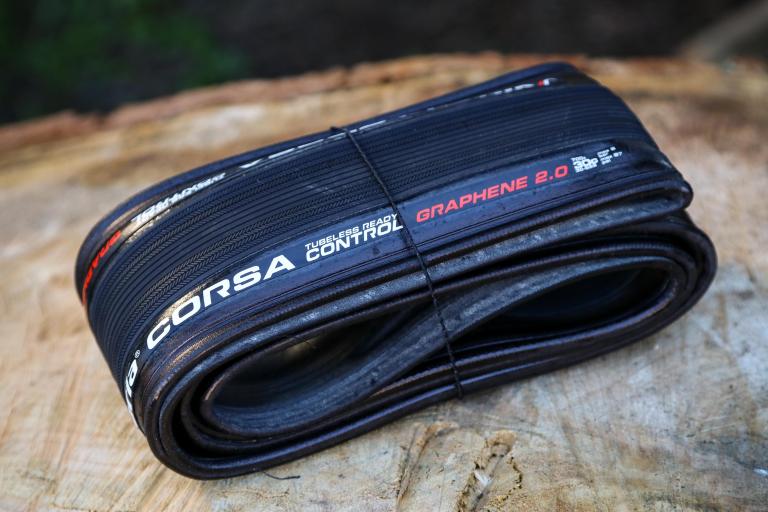