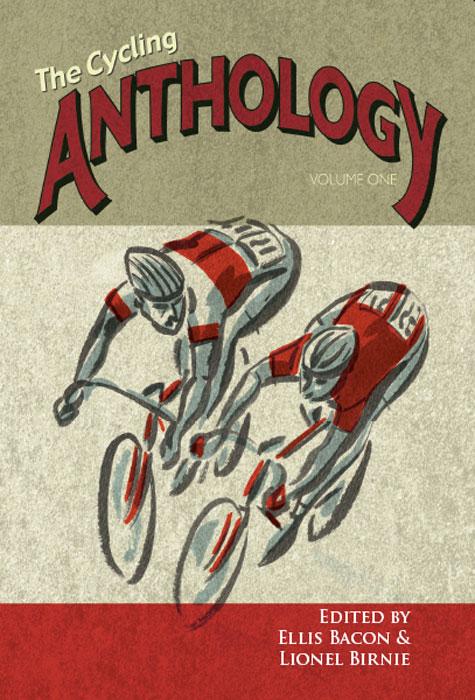 Before I start talking about the Cycling Anthology itself I'm going to have a quick pre-review warm up rant about one of the reasons I like it so much much. Here goes...

Haven't you grown sick of the cyber-chatter this year more than any previous year?

A Brit winning the tour and Armstrong's long overdue downfall were stories both quickly blighted by the new host of pseudo journalists all over the web - tweeting here, pontifi-blogging there. There was the twisted troll logic of hinting that Wiggins was probably on drugs - because Kimmage hadn't been allowed to accompany Team Sky on the tour (funniest line of the year from Kimmage "And I'd already bought a camper van...") and because Wiggin's had delivered a swear fest at the self same trolls for accusing him of being on drugs.'There's no smoke without fire' is normally quoted - only by those presumably not rock & roll enough to have ever seen a smoke machine... Then, after Lance was outed, there was the attempted lynching of Phil Liggett and the laughable suggestion that he should retire in shame and leave us listening to the Chuckle Brothers over on Eurosport. God it was awful. I was wearing my thumb out all summer long pressing the 'unfollow' button on people waving pitchforks I had previously counted on for sensible, considered opinions.

I'm re-following them again now - only so that I can send them a link to The Cycling Anthology. I hope they read it. 'The Cycling Anthology' is professional pro cycling journalism for grownups. There are no lazy clichés, egotistical pretences to any inner circles; no soundbites or gossip presented as fact for the cheap thrill of basking in all the retweets. 14 of the world's best writers on cycling and David Millar (who apparently knows a fair bit about cycling...) have offered up 15 gems.

These are the kind of stories which you may have wondered at but don't often get to see in this detail outside the pages of The Guardian. Daniel Friebe offers a fascinating piece called 'Cyclonomics' which lists the rules that Bill Stapleton use to build HTC-Highroad. Looking at the Billy Beanes Baseball system Stapleton worked out that cycling was similar - why chase big riders and put them in a same nationality team full of fellow stars when you could 'shop for guys with warts' and pick good riders with psychological or physical handicaps that other teams don't want? Patrick Gretsch has one leg longer than the other and Peter Velits a dreadful riding position holding him back? Fine. Both problems are superficial and fixable - 'only the other teams haven't grasped that, and so the rider is underpriced and underrated'. Combine them with a mixed bag of other nationalities, all glad for the attention, and a unproven, cheap, little upstart from the Isle of Man and set them loose.

David Millar's piece "Gone Biking" is a slightly Broke Back Mountain dedication to his long term training mate Michael Barry. A farewell eulogy to a retiring riding partner: memories of the tours they'd suffered together; the texts of a morning before meeting up on the same empty road outside Girona to train together; their wives discovering them 'wrestling' together in a tent... I made that last one up. It's a lovely story.

Alasdair Fotheringham's 'The Exile' on Oscar Freire is worth the price of the book alone. It's also a eulogy for a literally retiring and very underrated rider who lived outside of the drug culture and still managed to win the World's 3 times. 'Freire was never too big on cultivating the image of a cycling star; he's to practical and unpretentious for that.' 'Practical'? Oh yes. Apparently Freire loves yogurt so much he keeps a spoon in the glove box of his 6 year old Opel Corsa so he can run into supermarkets and buy yogurts he hadn't see before and test them straight away. That's so practical isn't it? And, according to Shane Sutton, Cadel Evans always rewarded his riders post stage with a Toblerone each. Interesting and essential news to a saddo like me.

Just a sample of the riches: 'Pendleton versus Meares' by Owen Slot. 'The Original Individualist' on Robert Millar by Richard Moore, 'Il Magnifico's Twilight' on Cipollini by Samuel Abt - all superb. As is Edward Pickering doing a whole piece on the real star of the tour for the past 2 years - 'In Praise of Thomas Voeckler'. Heaven.

For the Grassy Knoll Brigade the year's biggest stories are sensibly assessed in 'Bin Bag of Dreams' by Jeremy Whittle - despite being embedded on the wicked smoke machine and mirrors world of the Team Sky bus and "Another World' by Kenny Pryde - reflecting on his return to cycle journalism after 14 years to find that the taboo story of drugs has become 'the most important story' - but in danger of becoming the only story. 'Riders are under scrutiny like never before, social media is hijacking and bypassing legitimate journalism and press officers are acting as human shields to protect riders from all media other than tame TV.'

Luckily for us, a few people who still have some access - and know what they are talking about - are still getting through and reporting back in more than 140 characters. I look forward to Anthology 2.

Make and model: The Cycling Anthology Volume One by Ellis Bacon and Lionel Birnie Peloton Publishing

The editors tell us in the front 'The idea was to present something we hope will appeal to people who enjoy reading'. As opposed, of course, to those that don't enjoy reading so wouldn't be reading it...

Anyone who reads Rouleur or gets halfway through half of the articles should find this unputdownable.

2011 catchphrase: It is actually 'Fit for purpose'

Olympic Catchphrase (as used by every presenter and athlete bar Wiggins) 'Phenomenal'.

Rate the product for comfort, if applicable:
10/10

Lying down, in bed, in the bath. All comfortable places to read this.

Would you consider buying the product? yes

Buy it. Especially if you want to comment on cycling online with a modicum of intelligence - instead of waving some verbal pitchfork around like a loon.