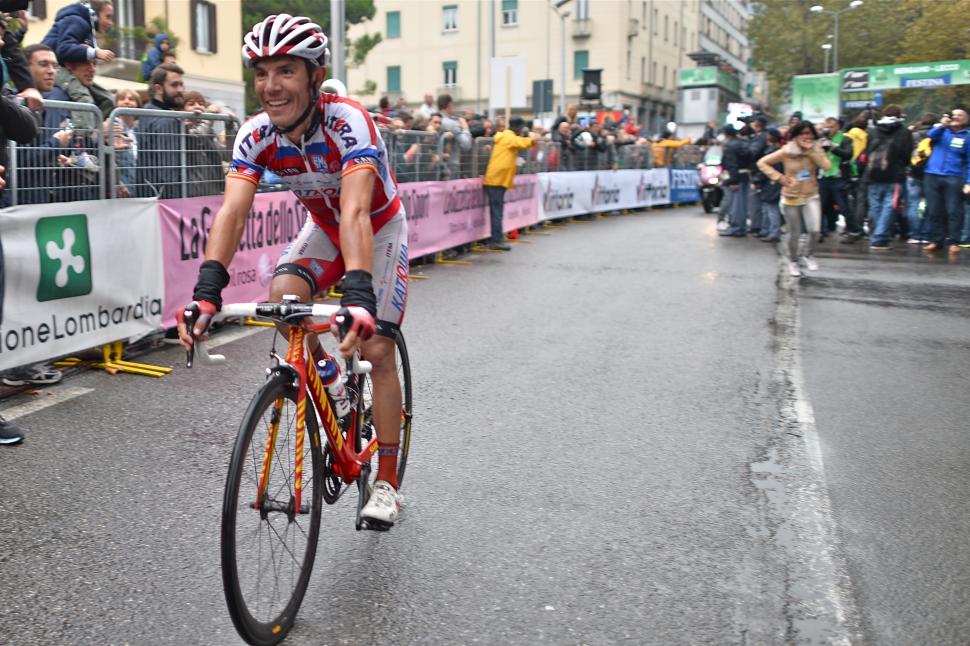 Spanish rider makes up for disappointment of last weekend's world championship...
by Simon_MacMichael

Joaquim Rodriguez, beaten in the closing metres of last Sunday's world championship road race in Tuscany, has swiftly put that disappointment behind him by winning the final monument of the season, il Lombardia, for the second year running.

The Katusha rider attacked on the day's final climb to Villa Vergano, just as he had done 12 months ago, and stayed away to win by a quarter of a minute from Movistar's Alejandro Valverde, who had finished third in the world championship behind Portugal's Rui Costa and Rodriguez.

Third place today was claimed by Saxo-Tinkoff's Rafal Majka, with Garmin-Sharp's Dan Martin denied the chance to sprint against the Polish rider for the final podium position after apparently crashing out of sight of the TV cameras on the final bend of the 242km race from Bergamo to Lecco on the shores of Lake Como.

“It was a good win for me, in a beautiful race," said Rodriguez afterwards. I’m just enjoying the moment. I always try to look forward.

"It was important to prove to myself that I could recover well after World Championships and focus on the next race. This win helps me move towards 2014 knowing that this is my level.”

Conditions were cold and wet, although the rain was nothing like the deluge that had fallen on last year's race, not to mention the world championship last Sunday.

Thomas Voeckler of Europcar had attacked from the break to lead the race solo by a shade over 3 minutes as he crossed the summit of the Madonna del Ghisallo climb with 46km left to ride, but the Frenchman was brought back ahead of the last ascent of the day.

Rodriguez's winning move on the way up to Villa Vergano followed earlier unsuccessful attacks on the same ascent by Domenico Pozzovivo of AG2R and FDJ's Thibaut Pinot.

Some big names were missing from the front group by that point, not least Giro d'Italia champion Vincenzo Nibali who had crashed out with around 90km still to ride.

“I knew that if I wanted to win, I had to attack there," reflected Rodriguez. "It’s October, the race is 240 km long, it was raining and cold, and it was even faster than last year, and you could feel the group was tired.

"I knew I had to make one decisive attack. I attacked at the right moment although, on the descent, I never trusted the curves in the rain, so the final descent was stressful. It is great to win, and it’s never easy."