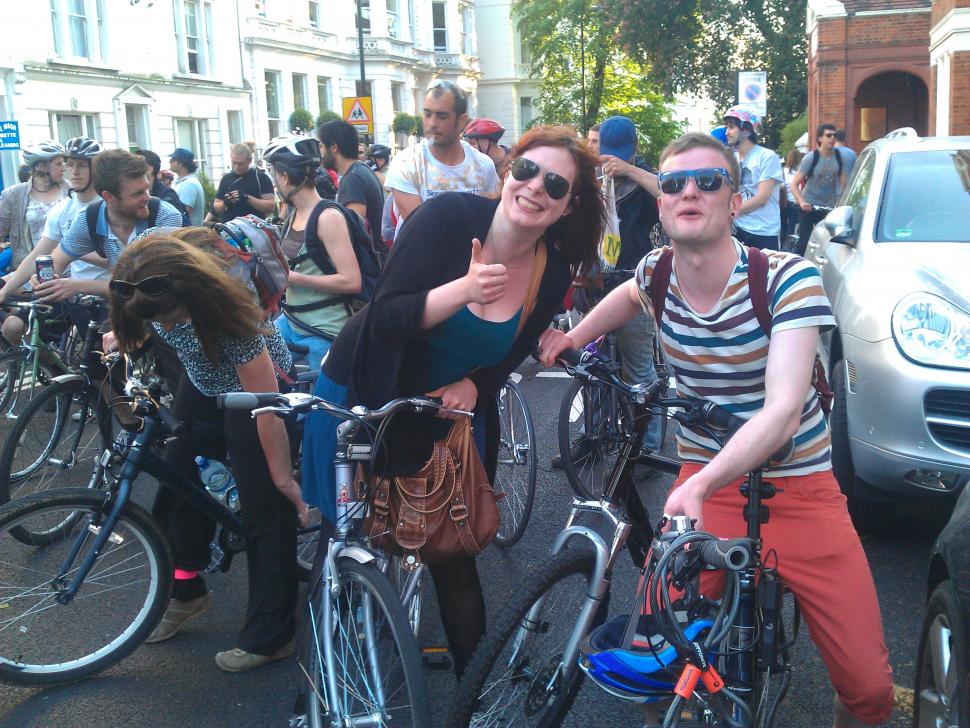 A series of hit and run incidents has been reported by cyclists attending a Critical Mass ride last night in London.

Road.cc has been made aware of a number of eyewitness accounts and videos of disturbing events including at least one female rider ‘run over like a speed bump’.

The cameraman wrote on YouTube: “Unfortunately my video doesn't capture what happened just before. But from what I saw and what I pieced together, the driver of this BWM pushed forwards into someone holding traffic at the junction in the background, they went over onto the hood of the car, their bike went under the wheels.

“He seemed to walk away from that without being hurt. Car then accelerated through and was aggressively weaving though and past other cyclists and then that's when the video picks up. He clips the cyclist next to me, who then falls backwards onto me.   “The details then get sketchy here, but another silver car (astra maybe?) also accelerates across the junction further up the road and literally runs over a female cyclist, she was then taken to hospital to check her over.

"It looked like the car had driven over her leg.  “Then while everyone is recovering from this and we're talking to the Police a 243 bus then knocks another cyclist over. No details on that one though.”

A road.cc reader, Elisabeth Anderson, contacted us with her eyewitness report of the incident. She said:

We'd cycled past Russell Square and were waiting at the lights to turn left into Theobald's Road and CM was pretty much finishing but there was a short hold-up so we stopped at the lights behind some cyclists on the left of the road.

I was standing next to a friend chatting waiting to move off and noticed a silver Astra in the right-hand lane as the passenger was talking to some cyclists. Initially I thought she was just chatting but after a while I realised she was shouting at cyclists. A couple of people talked to her but then started to just ignore her and she stopped shouting.

A few seconds later I heard a revving engine and the Astra lurched forwards hitting a group of cyclists and knocking them out of the way.

People started to shout to stop but the car accelerated through more cyclists, knocking them to the ground until the driver hit a woman from behind who was waiting at the lights at the junction.

The driver just knocked her over and drove right over the top of her and her bicycle. We were a few feet away and I don't think I'll ever forget the sight of a car driving over a person like she were a speed bump.

The car then accelerated down Kingsway, leaving the woman injured and lying in the road. A number of of went after the driver, although not sure what we would have done if we caught him, but at least managed to get the registration number and description of the vehicle.

The driver ran straight through a series of red lights and after a few miles chase through London,  we lost him. A guy that was trying to catch him up realised we'd lost the car.

He got off his bike and doubled up and broke down that we'd not managed to catch the driver.

I phoned my friend and he was still at the ride so I went back, fully expecting to find a dead body, but the woman was miraculously not severely injured. She had scrapes and bruises and was being taken off to hospital as the police took details.

Maybe some people feel that they are held up by cyclists but whatever the reason they justify this to themselves, this person decided to use a vehicle as a weapon against an entirely innocent person but this driver will be going to prison now. There are many witnesses and all of whom will not let this rest until this driver faces the consequences of this violent act.

Critical Mass rides are controversial both within and outside the cycling community.

Five cyclists arrested during Critical Mass on the night of the Olympic Games opening ceremony last July were found guilty at Westminster Magistrates' Court of offences relating to a breach of section 12 of the Public Order Act.
Nine people originally went on trial earlier this month from a total of 182 people originally arrested, but three were discharged earlier on during the proceedings.

In common with most Critical Mass rides around the world, the one in London, which began in April 1994, does not have organisers and is viewed by participants not as a protest but as a celebration of cycling.

It gathers at the South Bank on the last Friday of each month and heads off on an undefined route that will often take in locations such as Parliament Square.

In 2005, the Metropolitan Police sought to have ‘organisers’ submit a route for authorisation six days before each Critical Mass in London in line with Section 11 of the Public Order Act 1986.

One participant sought and obtained a declaration from the High Court that Critical Mass should be exempt from those requirements, and while the police successfully appealed to the Court of Appeal, the House of Lords upheld the original decision that no notification is required.

On the night of the Olympic opening ceremony on 27 July, police had warned participants to stay on the south side of the Thames and away from the Olympic Park.

A message on the London Critical Mass website at the time said: "Most London cyclists will know about the regular monthly Critical Mass ride this evening.

“Many will also know that the police seem concerned about it, because of all the Olympic traffic.

"It might be assumed that, as usual, the mood of Critical Mass will be to peacefully assert the right of cyclists to travel safely wherever they want in London.

"But in case the police – who normally leave Critical Mass alone – were to decide to intervene this month, it would be good to have lots of people prepared to be peacefully assertive."

Following the events on the night of the Olympic opening ceremony, the website stated: "It appears the ride was joined by some other groups and it became considerably fragmented, though London CM itself is being given all the credit for what took place."