Smell-free shirt, solar power in a bag for all your gizmos, new Cyclo touring frame, carpet protectors for your hallway...
by Sarah Barth 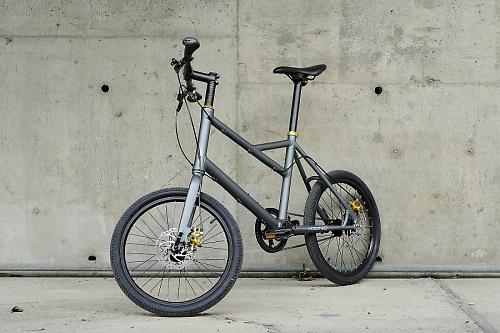 Here at Road.cc Towers, we’re a bit divided about the Yooniq urban bike. Small-wheeled non-folding urban bikes are strange beasts - but they do have their aficionados, like all niches.

Tony reviewed the Giant Mini 0 a while back and he loved it - a light fast bike that’s really easy to stow in small places - that’s why it’s big in Japan. Moulton too create beautiful small-wheelers that are fun to ride and non-folders are stiffer and more responsive than their collapsible relatives. They also fit more easily into cars, trains, planes...

And if you’re wondering about the physics of smaller wheels, here’s what Moulton, who popularised the small-wheel bike back in the 1960s, has to say about them:

Small wheels ... offer many advantages. With only half the rotating mass of the wheels on a 'conventional' bicycle, it is possible to accelerate faster. They are extremely stiff and much stronger than larger wheels because of the short spokes. The aerodynamic drag is lower; there is less frontal area and less spoke area causing turbulence to slow you down. The centre of gravity is lowered, resulting in improved stability. The small wheels free up space normally occupied by large wheels, allowing luggage to be carried lower. 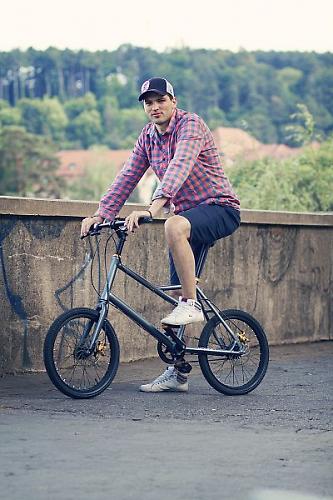 So where does the Yooniq fit in? We haven’t ridden it yet, so we can’t report on that, but the spec suggests it’s fully kitted out for the urban jungle. The 32-spoke wheels with tough rims should make potholes and kerbs a breeze. The bell is niftily integrated into the brake lever and there’s a double chain guard to protect your flowing skirts.

The ride position is described as “sporty” and the hub gear, it claims, lasts “forever”. The Yooniq costs 699 Euros. 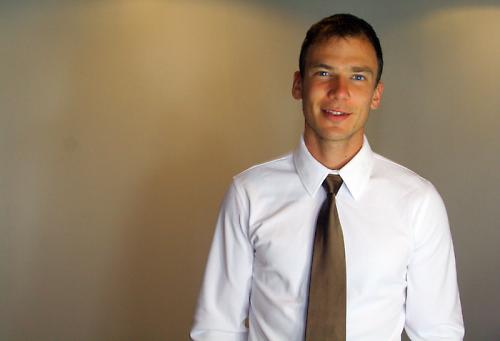 It sounds too good to be true, but we’re not scientists, so we can’t be sure. The Apollo shirt, being developed by Ministry of Supply, claims to trap your body heat in the fabric, keeping you cool when you’re getting hot and sweaty, then releasing that heat back to you when you’re sitting at work with the air conditioning on.

Ministry describe it as the ‘future of dress shirts’ - and the features suggest it could well be. The fabric is allegedly the same used  by NASA in spacesuits, and it’s stretchy, to give you room to move on the bike. It’s creaseproof, so no more ironing, and if you’re that way inclined, apparently you can wear it several days in a row without washing it. We hope you’re not that way inclined. 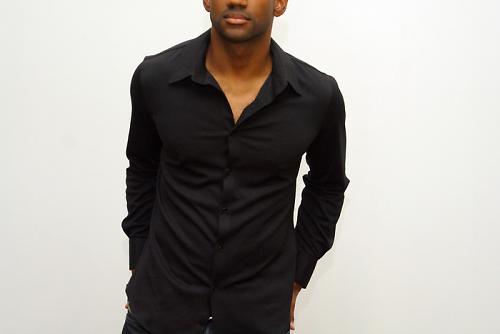 Anyway, it might just be the ultimate shirt for bike commuters.

More information at Ministry of Supply.

Solar panelled rucksack keeps gadgets on the go all day 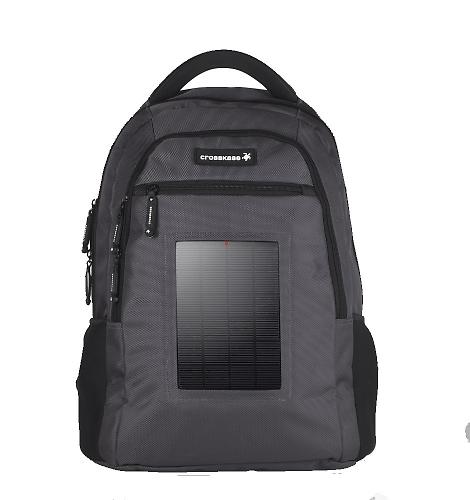 One for all you gadget-mad commuters - a rucksack with the power (literally) to keep you and your electrical essentials on the go all day long.

The Crosskase Solar 15 backpack has a solar panel on the front, which soaks up energy on even a dull day, that you can then use to perk up a flat smartphone or laptop. It stores enough power to fully charge most devices twice over, and can charge an iphone in two hours. 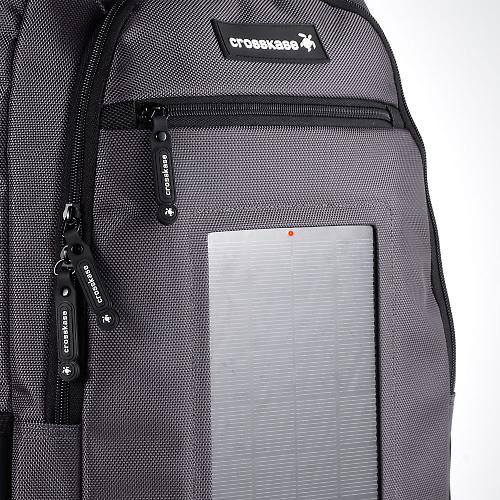 It’s a robust nylon construction with nice touches like an integral rain cover and padded laptop sleeve. There’s 25 litres of capacity and including battery, the whole thing weighs 1.7kg. 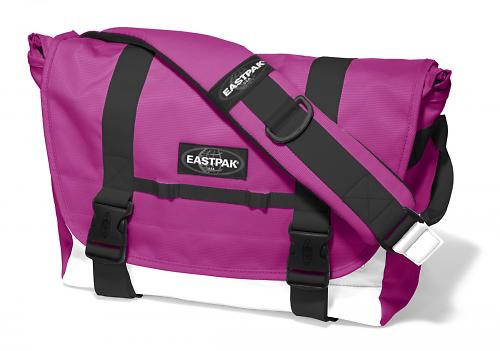 Rucksack maker Eastpak has just launched a range of courier-style shoulder bags for the round-town cyclist. Dubbed the Kruizer, they’re part of the bike-orientated Velow Collection. In fact, they ARE the Velow Collection right now, as far as we can tell, but at the launch at Look Mum No Hands this week, Eastpak was showing a rather promising-looking roll-top rucksack too. However, it won’t be available till 2013. 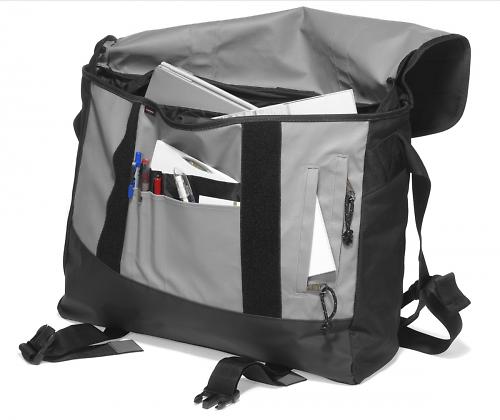 Visibility and convenience are the main aims of the Kruizer bag. There are plenty of reflective patches on the body and straps, and tucked down inside the bag is a slot for your Oyster or similar transport card.

The Kruizer comes in three colour options – all black, pink/white and blue/orange – and in three sizes (small, medium and large) at recommended retail prices of £60, £70 and £80 respectively.

The new bags will be available to buy from June from the Eastpak store on London’s Carnaby Street, as well as asos.com and John Lewis nationwide, among others. 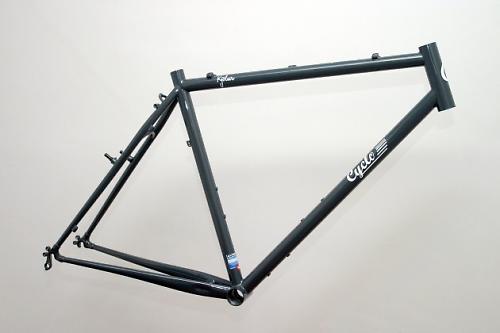 Super-stylish custom bike brand Cyclo, based in Barcelona, have just announced a touring-specific frame to add to their stable.

The frame, buildable for 26in or 28in wheels, along with all the add-ons a globetrotter needs, is called Kjölur. As Bernat from Cyclo told us: “Kjölur is a dirt road that crosses Iceland through the middle. I was there a couple of years ago touring, and it’s very popular amongst touring cyclists who wants to add some fun and more than amazing landscapes to their trip.” 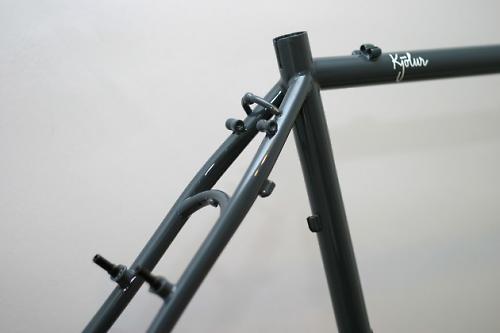 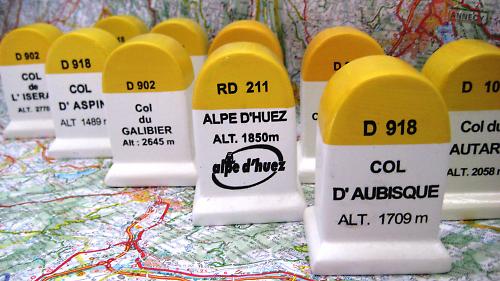 You know those kilometre markers by the side of the road you slowly winch your way past when ascending cols, the ones that somehow get further and further apart the nearer you get to the top? You can now buy these cute little models of them.

Cycling Souvenirs are producing a range of marker models for about 20 of the most famous cycling climbs such as the Col de Peyresourde, Luz Ardiden and Col du Tourmelet in the Pyrenees and the Col du Galibier, Col d'Izoard and Alpe d'Huez from the Alps.

The marker models are hand made and painted in Carpentras, right in the shadow of Mount Ventoux, made of Plaster of Paris they measure roughly 10x6x5cms and weigh about 200g. Each model features the col name, altitude and road number front and back, and the Alpe d'Huez one also has a map of the 21 hairpins on the reverse showing a stylised route up the climb. 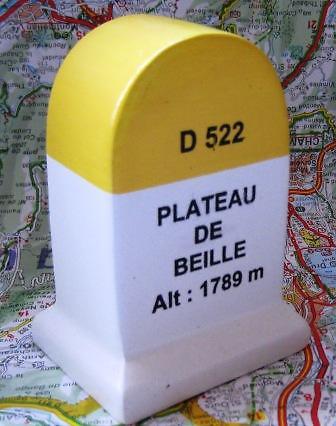 The markers vary slightly in price but at just over a tenner they’re not going to break the bank and make great presents for the grimpeur in your life, or souvenirs to congratulate an ascent.

We feel a collection coming on.

Bike mats save carpets from drippy dirt and grease 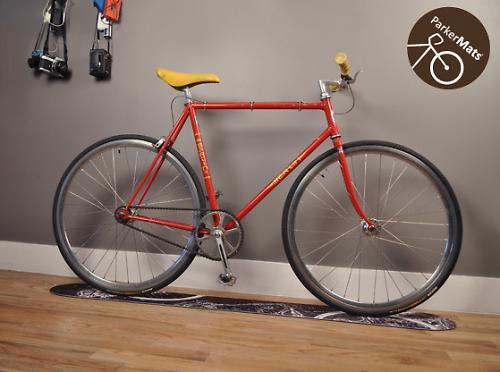 Any of your urban types who have to store your bikes in your hallway will know just how disgusting dirty, wet bikes coupled with grease and city grime can make your carpets and wooden floors.

ParkerMats, which look a lot like snowboards made from industrial carpet, offer a stylish solution to the problem, by offering protection with very cool graphic prints of cogs and bike wheels.  It certainly looks a lot better than a load of newspaper adorning the floor. 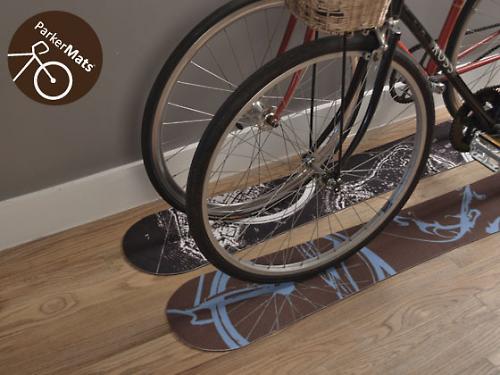 The three designs currently available are definitely geared towards the trendy apartment, but Andre Dettler, the creator, says that if they’re a success he’ll run a whole load of new designs.

$18 will get you a mat of your choice, but he’s not yet shipping outside America, so you’ll need to know someone over there.

To celebrate Ryder Hesjedal’s Giro victory on Rotor cranks, the company is offering a trio of giveaways with every purchase.

Customers can choose from the following options:

Free is our favourite price tag of all, but the offer is limited so if you’re in need of any of the above, it’s time to get shopping.