What the makers Condor describe as their entry-level 'cross frame is still pretty luxurious by the standards of most of the breed; especially if it gets used as a winter training bike or urban commuter which are surely the purposes this Bivio-X will be mostly justified for, even if the owner does get to play cyclo-cross a few times a season.

First impression out of the box is weight: "Blimey, that's light," in an office where we've received a fair few "cyclo-cross" bikes in the last year. 8.91Kg or 19lb 10oz less the pedals wouldn't get a comment for a road race bike but for something shod with 32mm knobbly tyres and a purposefully-beefy carbon fork suggesting heft, anything under 20lbs is promising a nimble ride across a tufty field.

The big story here concerns the frame, fork and neatly integral Condor-branded headset which together cost a penny under £600 although Condor have sent this one built up with a 'recommended' spec featuring an all-SRAM Apex drivetrain, Mavic Aksium wheels and Deda cockpit for an all-up price of £1,099. They're making the point that they can be competitive with the likes of Whyte, Cannondale and Genesis who among plenty of others all have models in this area.

Truth is though that people starting with a Condor frame are partly wanting to create their own unique artwork away from the production mainstream and this Italian-made number formed from heavily-manipulated Dedacciai 7000-series aluminium tubing - its name 'Force Curvo' pretty well describing how it is made - certainly looks like a good start.

Pinging the downtube that can only be described as ginormous reveals how thin the tubing walls are and a quick look at the spec sheet claims a frame weight of 1,640 grams for the middling 55cm size in a range that starts at a very useful 46cm and goes up to a lanky 61cm. There are stops and eyes for everything including mudguards and a rear rack with the rear brake cable routed tidily through the top tube. Getting the cable out of the way on a 'cross bike is a priority where lifting is an issue and the curve of the tube should also help in this respect. Funnily enough while hurdling barriers isn't usually a worry for commuters, carrying bikes up and down steps and into lifts often is so the apparently contradictory requirements of cyclo-cross racing and getting to work really are more complementary than they first seem.

And so is touring, where the slack 71° head angle should result in nice stable steering if you load up the front; there are 'lowrider' rack bosses on that fork as well as disc-brake mounts which surely must be a first. We foresee an entertaining if muddy time for our reviewer. 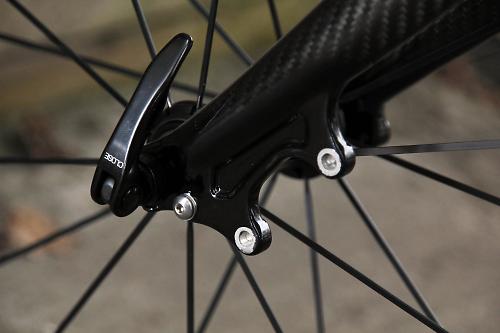 Condor Bivio-X: ready for disc brakes on the beefy carbon fork and the frame will come with mounts too although our test sample won't need them on account of the trick-looking and light Condor-branded cantis.