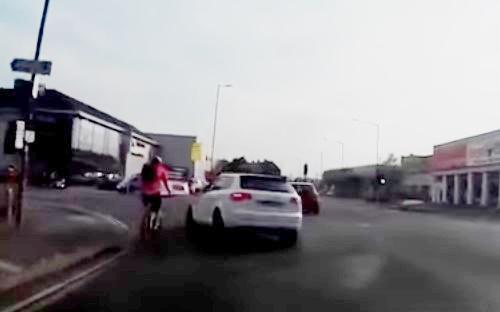 At the weekend we reported how dash cam footage of a frightening near miss submitted to Greater Manchester Police had allegedly been overlooked on the grounds that there was no complaint from the cyclist affected. Amid confusion about how different forces treat video evidence, campaigners have called for guidelines to help clarify the situation.

The BBC reports that all four police forces in Wales are to start using dash cam footage recorded by the public to investigate driving offences following a successful pilot scheme by North Wales Police.

Duncan Dollimore, Cycling UK’s Head of Advocacy and Campaigns said: “Cycling UK welcomed North Wales Police’s Operation Snap when we learned about it in its infancy. We saw the willingness of the force to accept video footage from both dash and helmet cams as a great step forward, particularly as they were using it to prosecute offenders.

“Cam footage is clearly here to stay and the quality is only going to improve. If forces are not willing to move with the times and accept it, then they might as well be policing in the last century.

“Currently we have some forces, such as North Wales and West Midlands, willing to accept dash and helmet cam footage and others who refuse to do so. This inconsistency needs to be addressed urgently and national guidelines for the submission of footage agreed, so it doesn’t matter whether you’re submitting evidence in Llanberis or Newcastle, the process and potential for prosecution remains the same.”

Neil Greig, IAM RoadSmart director of policy and research, also expressed concern about inconsistency between different forces. “IAM RoadSmart is calling for consistent national guidelines on the standard of dash cam footage required for prosecutions, what the police will do with it and how to submit it in the correct way.”

He did however add that it was his belief that dash cams should not become a replacement for officers undertaking high profile roads policing.

Greig also said that dash cam footage didn’t always show the full picture of a crash, suggesting that it was often too short, poor quality, failed to show how a crash developed or only showed a restricted angle.

Dollimore countered: “While IAM RoadSmart are correct that video evidence will not always show the full picture of a collision, the reality is without it we’d often have nothing apart from poor recollection.”

1
Brompton drops its ‘lightest bike ever’: new 7.45kg titanium version of iconic folding bike revealed
2
Chris Boardman heads newly-launched government body Active Travel England
3
Stages will retrofit a power meter to your existing cranks
4
"Tired of road crime": CyclingMikey on episode 16 of the road.cc Podcast, plus how to make the most of your lunchbreak
5
TV surgeon and cyclist killed after collision with motorist in Essex
6
Near Miss of the Day 702: Must Get In Front lorry driver goes wrong way round pedestrian island
7
Near Miss of the Day 698: MGIF BMW driver close passes cyclist AND runner
8
Cyclists angered by Canadian politician's road safety interview...while driving through snowstorm