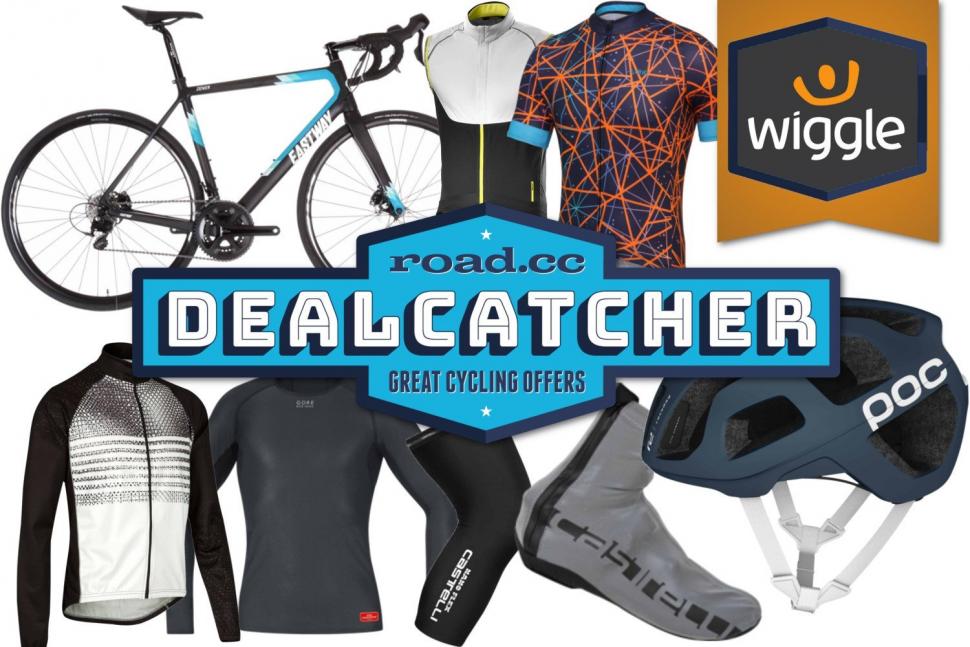 In today's DealCatcher we've got wonderful Wiggle deals on Eastway bikes and a mountain of seasonally-appropriate cycling gear...
by Elliot Johnston

The DealCatcher's had a whip around Wiggle's wondrous trove of cycling treasures, and he's emerged with some crackers today.

An Eastway Zener D2 Road Bike, the only thing in today's round-up that actually rolls, is quite fittingly the product that gets things rolling today.

After you've had a look at the bike, the DealCatcher's got a whole host of cycling clothing for you to feast your eyes on.

The stand-outs are the bargain bits of Castelli cold and wet protective gear, as well as the fancy-looking Primal, Mavic and dhb tops.

As far as bargain disc-equipped road bikes go, the Eastway Zener battles it out with the best of them.

The D2 carries a Shimano 105 drivetrain, and an RX10 wheelset.

Fancy reflective jackets are pretty great, especially when they're at a 56% discount.

This jacket's the perfect partner to a lightweight waterproof, or on its own in chilly conditions.

While the weather's trying to make up its mind whether it's winter or spring over the next few weeks a pair of knee warmers will come in handy.

A half way house for when it's too mild for bib tights but too warm for shorts, Castelli's Nanoflex warmers are a fantastically flexible option.

Just as the knee warmers offered you a halfway house for your legs, Mavic's Vision H2O Gilet does the same for your top half.

Whether it's raining or threatening to, Mavic's H2O range is a great option.

While the nights are still dark early and the mornings too, it's important to be seen.

Castelli's Reflex shoes performed excellently on test - though our man Ed Mason was a little wary of the price tag.

With that problem out of the window, the high reflectivity and excellent protection are allowed to shine... or reflect...

While we're on the topic of flexible cycling clothing, Gore's windproof base layer will keep you warm when it's frighteningly windy.

We'll let the spectacular jersey speak for itself.

Finally, POC's Octal Raceday Helmet is certainly on the pricey side of products.

While it is pricey, and it's not that bad now it's had a discount, the POC performed excellently on road.cc review. Check it out: