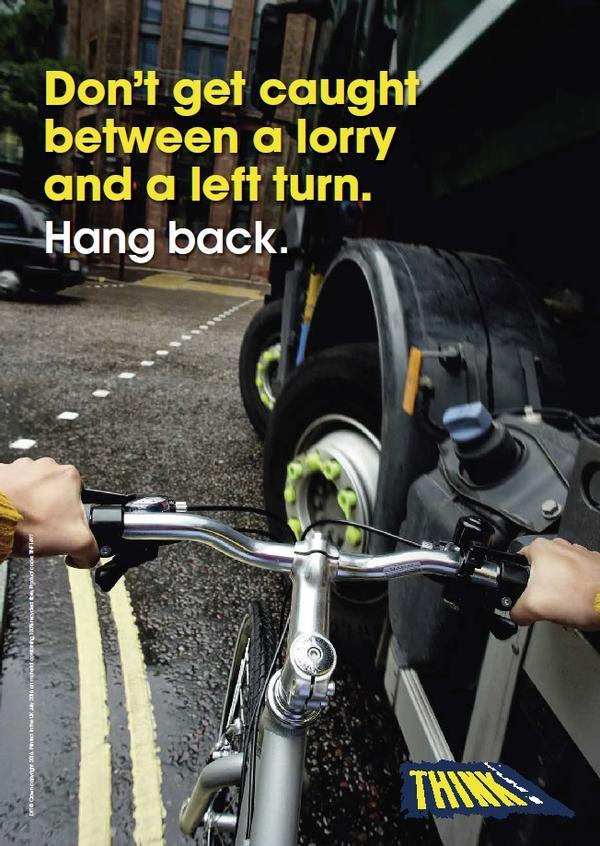 Meanwhile, government department releases another road safety video - this one aimed at drivers
by Simon_MacMichael

Cycling campaigners have put their own spin today’s Think” road safety campaign from the Department for Transport (DfT) which warns cyclists to ‘Hang Back’ and not get on the inside of a left-turning lorry. The charity Cycling UK says the government department is guilty of “victim blaming” and has urged it to pull the campaign.

As we reported earlier today, the campaign has been met with widespread criticism on social media, with British Cycling policy advisor Chris Boardman calling it “desperately misguided.”

Green Party London Assembly Member Caroline Russell saying it”quite clearly shows” that the government “have not got the first idea about how to reduce danger for people cycling."

Some campaigners, however, have taken the DfT’s footage and put their own spin on it to show where the DfT had gone wrong and suggest how the message could have been pitched differently.

Alex Ingram, secretary of hfcyclists, the local branch of the London Cycling Campaign in Hammersmith & Fulham, put his own voiceover on the footage.

Cycling: it's not pianos.
A quick one-take voiceover for that DfT Think! advert. I hear it's going down well.pic.twitter.com/hpZHE58yxP

Campaign group Stop Killing Cyclists also tweeted their own edit of the video – changing the text at the end – and also said they have submitted a Freedom of Information Request “to find out how much money and time was spent on the THINK! ad, and who signed it off.”

We made some alterations to the @THINKgovuk video to help reflect the reality of the situation. pic.twitter.com/FmPg6DQ5Fc

The reception afforded to the DfT video today is in stark contrast to the welcome that campaigners gave earlier this month to the West Midlands Police announcement that the force would seek to prosecute drivers who did not give cyclists sufficient room.

One Twitter user this morning asked the force’s road policing team their opinion of the DfT campaign and received an unequivocal response.

@bellamyonabike @THINKgovuk Let's just say we won't be using it, we might use it to show drivers not what to do though. #S3RTA1988

Cycling UK – which described West Midlands Police’s move as “the best road safety initiative ever” – revealed that earlier this year, it suggested to the DfT that it build a Think! campaign around that very  issue of cyclists put in danger by drivers who make close passes on them.

Duncan Dollimore, the charity’s senior road safety and legal campaigns officer, said: “That was rejected because we were told that their campaigns were informed by casualty statistics, which had not revealed that near misses lead to significant casualties (that is the point, it was a near miss so there was no collision, but there could have been).”

On learning that instead the campaign’s message would be for cyclists to ‘Hang Back,’ the organisation, which rebranded from CTC in April, expressed its reservations to the DfT.

“Our concerns that the issue was a little more nuanced, and that there were questions regarding cab design, infrastructure, and driver behaviour, as well as education for cyclists, were not taken on board,” said Dollimore.

“The result is a campaign which, in looking at one part of a bigger picture, and even then through tinted windows, risks being remembered as an ill thought through victim blaming campaign.”

He added: “The tragedy with this campaign is that even its most ardent critic should accept that warning cyclists to be careful when they are on the near-side of a lorry, and that the lorry driver's vision might be restricted, are sensible messages to include within a road safety campaign.

“These, however, are lost when the focus is solely upon victim responsibility, with a video which begs more questions than it answers.

“The DfT might be best served to acknowledge that this one has not worked, pull the campaign and start again. Cycling UK would be more than willing to work with them should they chose to do so, but before they ask cyclists to THINK, they need to listen,” he concluded.

Meanwhile, this afternoon the DfT has published a new video on its YouTube channel which urges motorists to take care around cyclists on the road, including given them sufficient space.

Filmed in the streets around the department’s Horseferry Road headquarters, some might be forgiven for wondering if the footage was put together in haste this morning to try and defuse the reaction to the earlier video?