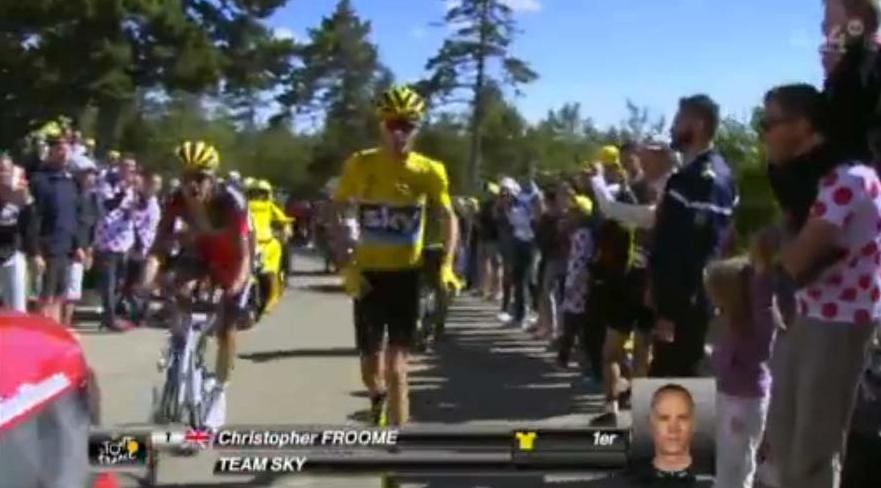 Today has witnessed a stage of the Tour de France that will go down in race history, with overall leader Chris Froome having to run up Mont Ventoux after he was brought down in a crash when a motorbike ahead of him could not find a way through the crowds.

The Team Sky rider and defending champion was eventually able to take a neutral service bike, but its pedals were incompatible with his shoes, and it was only when he was able to take a bike from a team mate that he could complete the stage.

Adam Yates of Orica-BikeExchange, second overall this morning, was the initially given the provisional overall lead, but the race jury subsequently amended the result meaning Froome stretches his lead.

Lotto-Soudal's Thomas De Gendt, a member of a 15-man break that got away early on, had already won the stage when the drama unfolded towards the end of the 178 kilometre stage from Montpellier.

Yesterday evening, race organisers ASO had shortened the stage by 6 kilometres to finish at Chalet Reynard, due to forecast 100 kilometre an hour winds.

As a result, it seems the barrierred section started closer to the finish line than would normally be the case, and that also meant that there were more fans on a shorter section of the climb than would usually be the case.

On the early slopes of the climb, which despite finishing lower down the mountain still required the riders to tackle 9 kilometres at an average gradient of 9 per cent, Movistar's Alejandro Valverde attacked from the overall contenders' group, with team mate Nairo Quintana - second to Froome in 2013 and last year - then trying repeatedly to put the race leader under pressure.

Froome, however, countered, going away with BMC Racing's Richie Porte - the pair were later joined by Trek Segafredo's Bauke Mollema - and Quintana had no response.

The trio looked poised to take significant time from their rivals when a motorbike seemed to stall in front of Porte due to its rider being unable to find a way through the crowds, the Australian crashing into the back of it, Mollema and Froome also coming down.

Froome continued on foot, looking desperately over his shoulder for a spare bike, grabbing one from the Mavic neutral service motorbike, before changing that for one from a team mate.

Yates had been 28 seconds behind Froome this morningand passed him amid the chaos. Initially, it seemed he would be the new race leader, with the Team Sky rider dropping to sixth.

However, after examining what had happened, the race jury gave Porte and Froome the same time as Mollema, the first of the trio to cross the line - meaning Froome extends his lead over Yates to 48 seconds, with Mollema now third overall.

Echelons had formed earlier on in the stage, with Quintana staying close to Froome to avoid a repeat of yesterday when the Team Sky rider got away with stage winner Peter Sagan of Tinkoff to take more seconds from his rivals.

Coming off the penultimate climb, Orica-BikeExchange's Simon Gerrans, leading the GC group, crashed as he overcooked a corner, Team Sky's Ian Stannard having nowhere to go and coming down too, as did another couple of Sky riders.

Froome, on that occasion, stayed upright. But the drama that unfolded on the Ventoux is bound to reignite the debate over how riders can be protected from overenthusiatic fans, while retaining cycling's status as perhaps the most accessible sport to watch in the flesh.