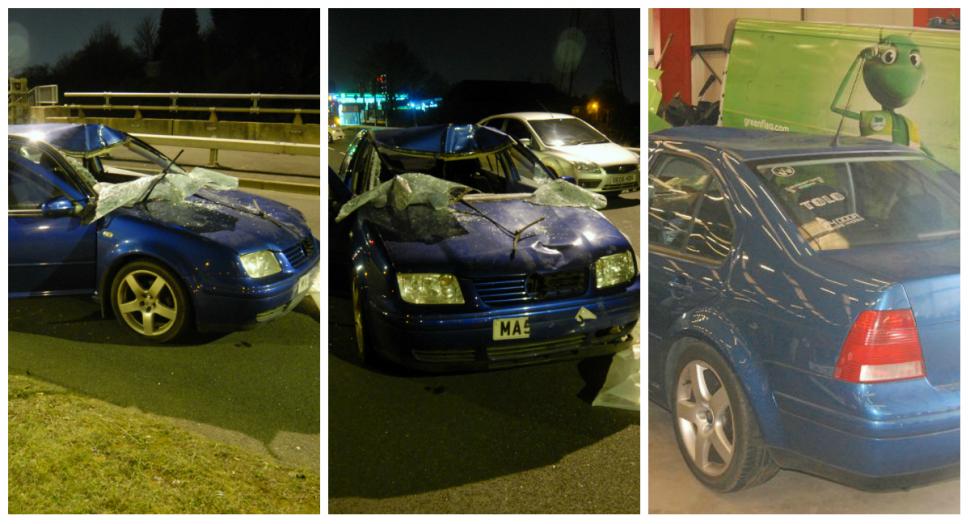 West Midlands Police have released images of vehicle involved in a hit-and-run incident that claimed the life of 15-year-old Adam Jones as he crossed a road junction with his bike yesterday evening.

They add that a 24-year-old man who was initially arrested has been released after it emerged he had nothing to do with the incident, which took place yesterday evening shortly before 7.40pm at the junction of Beaconview Road and Walsall Road, Friar Park, Wednesbury.

The pictures show the extent of the damage caused to the Volkswagen Bora when Adam was thrown through its windscreen, and police have appealed for the driver, who abandoned the vehicle and fled the scene, to come forward.

Inspector Paul Bennett, head of the Collision Investigation Unit, said: "This was a shocking collision which has cost a young man his life and we are determined to find the person responsible for his death.

"The driver of the vehicle would have known that Adam had suffered catastrophic injuries, yet he still ran away without seeking medical assistance for him. I am appealing to him directly to do the right thing and come forward.

"I would also like to hear from anyone who recognises the car and knows who uses it, possibly having seen it parked outside an address or worked on it in a garage, to help us trace the driver."

Police say the bright blue car, registration number MA52 XVV and with distinctive stickers on the rear windscreen, was sold several months ago and they have eliminated the registered keeper from their investigation.

Anyone with information is aksed to contact the Collision Investigation Unit on 101 or the charity Crimestoppers, anonymously, on 0800 555 111 quoting log 1989 of 26 March.

West Midlands Ambulance Service despatched an ambulance, a paramedic support officer and a paramedic in a rapid response car to the scene yesterday evening.

In a statement a spokesman said: “Crews attended a road traffic collision involving a car and cyclist.

“Sadly, despite the efforts of ambulance crews nothing could be done to save the cyclist involved. He was confirmed dead at the scene.”

Please note comments are locked on this story.