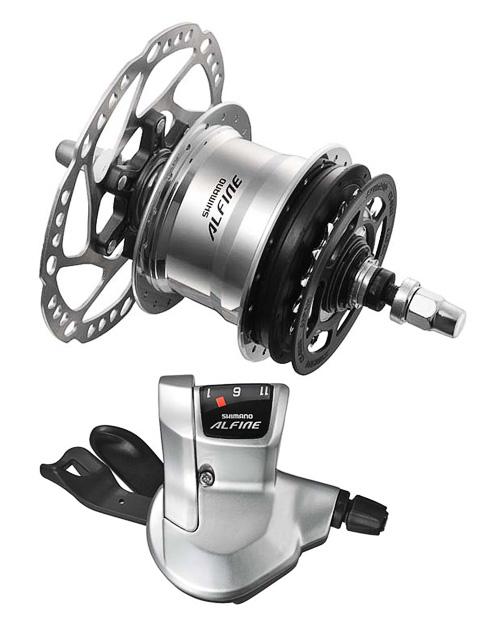 The internet is a fickle mistress. Big brands like Shimano no doubt love the speed that information gets to the users, and hate the fact that it's much too easy for folks to jump the gun. You may have read about the new Alfine 11 speed hub already, though you shouldn't technically have done so – the release date is today, so like the good e-citizens we are we've held off talking about it until now.

This will be a story in two parts though, since we haven't actually seen it yet... The car's idling outside waiting to whisk us to the official release, but we thought we'd give you a taster and fill in the gaps later.

The big news is likely to be not the fact that there's more gears, but that the internals are a complete revamp. Instead of a grease-based lubrication system Shimano have opted to go down the oil-bath route, which should mean easier maintenance and longer life. The obvious comparison is with Rohloff's Speedhub, which uses a similar lubrication system and is pretty much the benchmark for reliabilty.

The range goes up to 409% – a big increase on the 8spd but not quite on a par with Rohloff's 526% – which makes it a genuine option for offroad machines as well as town bikes and tourers. The system weight is rumoured to be 1600g, lighter than the current eight, and the price around €300 though we don't know how that'll translate to the UK.

Shimano are rolling the new hub out with a redesigned shifter which incorporates the two-way release system that allows you to push the finger trigger to drop a gear. It remains to be seen whether they've swapped the levers round so that they do the same things as the derailleur ones.

Anyway, enough conjecture. We'll add some pics and some actual hard facts on the way home from our mobile Volvo office on the M5. Stay tuned!