The bell in the lift pings as the doors open onto the empty hotel reception. The only sound whilst I cross the hall is the tick of my bike’s freewheel and the clip of my cycling shoes on the tile floor. I look at the clock on my bike computer, 01:00. Again I ask myself what I am doing riding out into the dark Italian summer night, my body willing me back to the warmth of my bed. This is part of the deal, a 24 hour race is never easy and part of the fun is riding when you should be asleep; that is what I told myself as I clipped in and rode to my shift at the Castelli 24 hour race. 24 hour racing has always been popular with mountain bikers. A closed course, laps and arena away from populated areas makes for straight forward organisation. It has never really taken off with the road racers, the logistics of closing roads for a whole day the first of many major challenges which face any organiser wanting to put on such an event.

Pedale Feltrino and Italian clothing company Castelli have found a solution. Each year during the first weekend in June they close down the centre of Feltre, a small town in the foothills of the Dolomites, 10 kilometres from the Castelli factory, for their unique event. From 10pm on Friday until 10pm on Saturday this 2 kilometre circuit is the venue for their 24 hour team relay race, the Castelli 24. Riding to the start through the empty streets, the sleeping world around me bathed in a tungsten glow, I was one of 12 journalists riding as Castelli Media and off to ride the grave yard shift. The Castelli 24 saw 100 teams of 12 riders take part. Each of them had their own tactic for the race, amongst those riding for the victory, measured in total number of laps, were some of Italy’s top amateur teams. For them the Castelli 24 is a prestigious event and one of their season goals. For other teams the personal challenge to take on the difficulties of racing for 24 hours was their main competition. There were even some corporate teams racing as a team building exercise and just to enjoy the carnival atmosphere. This means that on course there were a multitude of groups of different speeds, with the leaders averaging 45 kilometres an hour over the 24 hour period, making the race tricky to watch as I arrived for my first turn on the course. 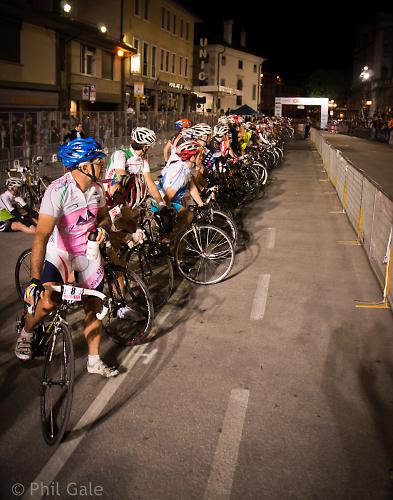 Castelli Media was broken down into 4 different groups of 3 riders; with each triad being the team on track during a 3 hour window twice in the 24 hours. These trios were then broken down further, with one rider on track for 20 minutes, one waiting in the pit were the changes had to take place and the third man resting at the Castelli hospitality tent. One the key rules of the Castelli 24 is that only one rider is allowed on the circuit at once. If broken a time penalty is given to the team, which can be very costly.  With this in mind I waited, focused on my team mate who was riding, looking for the signal that he was going to change. At the end of his last lap he would pull off to the right and exit the course through the pit, normally hands in the air to show his team mate he was finished. Then the next rider would enter the circuit at full sprint, hopefully back into the group that their team mate was riding in. Many of the larger teams had a spotter in the stands opposite the pit; they would give a signal, that it was time for the rider waiting to head out. This tactic could easily gain them 50 metres each lap, which over a 24 hour period soon added up.

As I sprinted out of the pit, chasing the group that my team was riding in, my body was shocked into action. The course had a 400 metre climb after the start. Though not brutal, it was enough to be a launch pad for attacks, which normally came each lap, by the top riders were at 100% and gaps would appear. The pace was very high reminding me of my days racing as an elite in France. After the climb there was a short technical descent, on which it was necessary to keep focused on the slower lapped riders. Approaching them in the darkness, all that could be seen was their compulsory rear light and a quick decision on how to pass had to be made. Following the descent there was a straight blast on the opposite side of the circuit before heading back into the centre of Feltre and the start-finish over their famous cobbles. 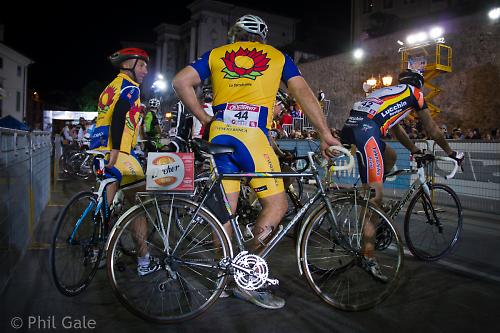 As the laps passed I was soon engrossed in the world of racing, sticking with the leaders. These teams were riding much shorter legs than mine which meant that when they changed, with their 50 metre advantage, it was a full sprint at the bottom of the climb to get back up to their group. Consumed by the 20 minute interval of racing it was all too soon time to change, my trio’s shift coming to an end. Tired but elated I rolled back to my hotel for a welcome break before taking on my second shift later in the day. 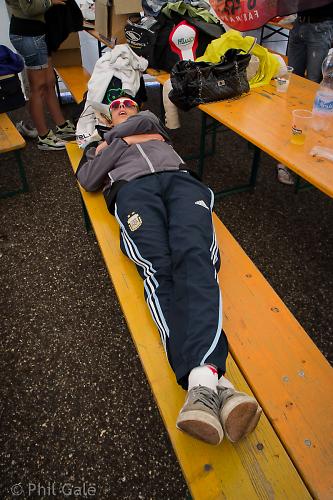 Unfortunately the weather was out of the control the organiser. Early morning rain forced a halt in the racing. Being civilised Italy and not an early season Classic the riders' safety was paramount and the race was put on hold until the cobbles in the centre of Feltre were dry. Even with no racing the party atmosphere continued. Walking around the teams’ tents during the rain storm it felt more like a music festival, all the teams had music, food and plenty of energy to keep themselves entertained during the break in racing.

In the early afternoon, sadly after my allotted shift, the race was restarted. As the clock counted down to 10pm and the finish, the racing became much more serious. The celebrities, ex-professionals and current professionals all came out to add to the build up towards the finish. Paulo Bettini, Ivan Basso, riders from Liquigas and Colnago–CSF Inox were all present, either racing or supporting. The final 30 minutes of the race saw all but the teams in the top 20 positions pulled off of the circuit. Adding to the crescendo end to the event and allowing the leaders to race unhindered by lapped riders; the perfect finish to this truly unique event. Not quite a six day, similar to a Madison and faster than a road race the thrill of the Castelli 24 is unmatched. It is an event which is open to all and everyone should ride at least once.

For more information on the event and entries (either a whole team or single riders looking for a team), go to www.24orefeltre.it/.