The terrain in Spain

If you fancy some warm weather riding, head down to Murcia
by Mat Brett

The sun is shining, the roads are smooth and empty, and we can smell the sea as we pick up speed on the long descent. Even better, the word is that it’s cold and raining back in the UK. Bonus!

We’re in Spain with Fitness 12 Retreats, a company that runs short breaks based at La Manga Club near Murcia – down the bottom, on the right. You might have heard of La Manga Club. It’s a sports resort where big footy teams come for some warm weather training. And you know when they brought Superstars back to TV a few years ago? That was filmed here. There are golf courses, a zillion tennis courts, even a couple of cricket pitches… The sound of leather on willow isn’t something you expect to hear this close to the Mediterranean. 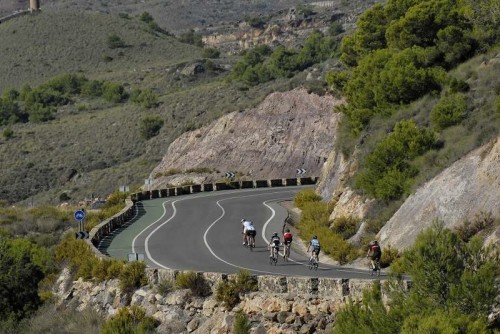 We’re here for the cycling, though, and today we’re heading into the hills. There’s just a small group of us, a mix of riders who have headed out from the UK for a long weekend, and ex-pats who are out here all the time. They’re easy to spot – they’ve got the best tans while the rest of us are starting to look a bit pasty. And the white bits of their kit are actually white – not that grey you get after a few wet rides at home.

It’s not mountainous in this area – although there are some big old peaks on the horizon – but there are some testing climbs. They’re not mega-steep, but they’re long enough – the sort you have to stay seated for and grind out, rather than out-of-the-saddle stomps. 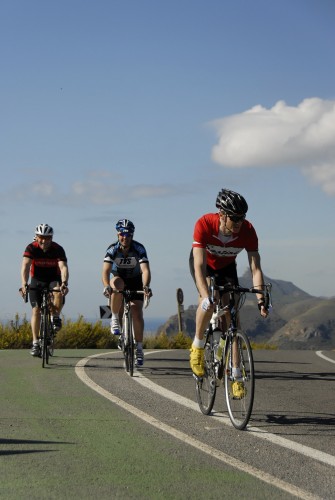 And a few minutes in, at the top of the first one, we have our first casualty. Well, kind of a casualty. It’s Rob from The Comic, and, ooh, he’s looking pale. Reeeally pale. And now he’s throwing up. A lot. And again. And some more. And now we’re all starting to feel a bit sick.

But before you start feeling too sorry for Rob, this sickness has very little to do with the terrain or the exertion, or anything else that requires sympathy. It’s more down to last night’s beer. Or possibly the vodka. Probably the two in combination, actually. That’ll learn him. We have the pics but… you really don’t want to see them.

Fair play, though. Once all the heaving is done, we’re back on the road and clocking up the miles again through terrain that’s rugged and rural. Steve with the deepest tan and the whitest kit knows the area best. He’s been out here for years, and he’s leading the way. We leave the Med, which has been down to one side of us, and start heading inland on great roads. 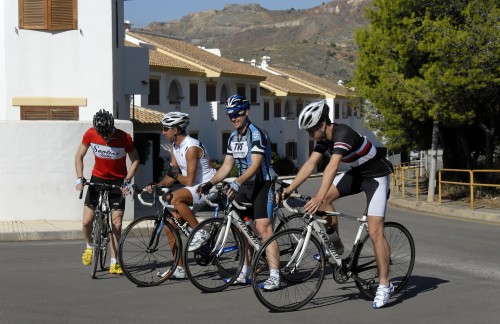 Maybe I’ve been riding a bike for too long – almost certainly, in fact – but I get excited when the Tarmac isn’t chock-full of potholes or covered in cack. Over here, it’s like riding on a velodrome half the time. The roads are wide and sweeping, and there’s very little traffic on them. You know, like they should be. And although it’s October, it’s definitely shorts weather; the low 20s, probably. Warm, but not sweltering. Just the job.

We get a chaingang going on the flat bits and start picking up the pace. There are some good riders here. Chris, for instance, is a time trialist from Surrey, Jeff owns the bike shop out here, and Steve (not Steve with the tan) who runs Fitness 12 isn’t too shabby either. He rode the Étape last year when it went up Marie-Blanque, Soulor and the Tourmalet. He’s been running health and fitness breaks to La Manga Club for years but the cycling retreats are new, and so are a bunch of triathlon weekends run with former world champions Spencer Smith and Tim Don. 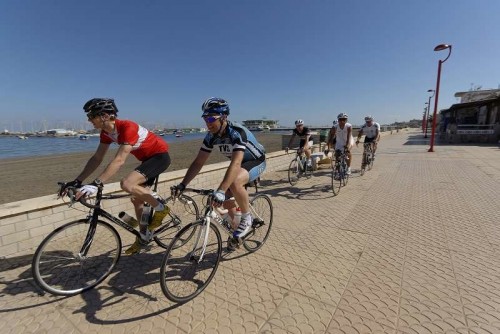 Before too long we’re scooting along the seafront in Los Nietos… confusing given that we were riding away from the sea a while back. It all makes sense when you look at the map, though. This is a peninsula and Los Nietos is on the Mar Menor lagoon. We stop and take in the view – you’ve got to when you’re at the seaside – and then get back on the road. There’s talk of a coffee stop in a few miles, so we get the chaingang going again to get there in double-quick time. 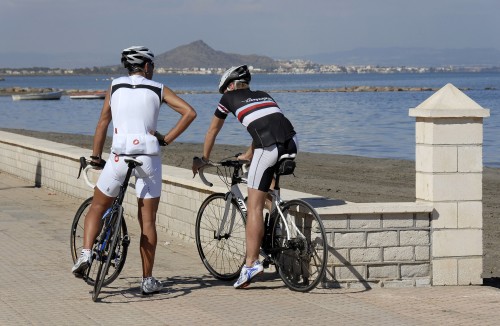 The coffee stop turned into a coffee and cake stop. And chips. And some other stuff too. Well, you can justify pretty much anything when you have a few miles in your legs. And when we couldn’t justify any more, we roused ourselves for the second half of the ride, heading inland again for more through-and-offing, more climbing, more taking in the sunshine and scenery. 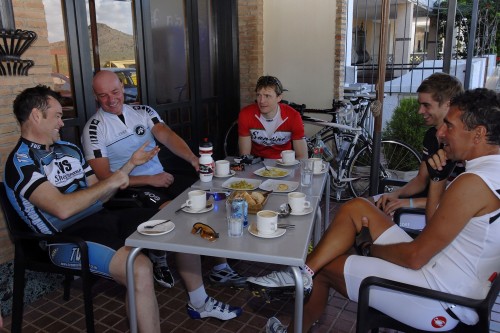 To be honest, I lost track of exactly where we were, but that’s one of the good things about going on a guided ride – you don’t have to worry about it. Somebody else sorts out the ride, tells you which direction to go and when to stop, and you just get on with turning the pedals.

What I do know is that the Vuelta a España sometimes heads along these roads, and so does the Tour of Murcia – Murcia is the name of the region as well as the city – which has been won in the past by the likes of Pedro Delgado, Miguel Indurain, Marco Pantani and Denis Menchov. They’re into their cycling around these parts. Eventually, we climbed one last big hill before dropping down super-fast to La Manga Club. Actually, that’s not quite true. We did scream downhill, but the steepest climb of the day comes right at the end – it’s the climb back up to the accommodation and it’s a real sting in the tail when your legs are looking forward to a rest.

Luckily, though, once you flog yourself up the hill, you launch into full-on recovery mode. Main man Steve is majorly into recovery, so he gets everyone together in the gym and goes through a stretching routine. And then you hit the resort spa, which is a real treat. Steam rooms, saunas, a load of different water jets to fire at your aching muscles… It’s spot on after a big ride. If you’re looking for cheap ’n’ cheerful, this isn’t it. You could sort yourself a long weekend’s riding in Spain for much less cash. But what you get here is excellent accommodation – as well as the bedrooms, our self-contained apartment had a kitchen, living room and a couple of bathrooms – and as much access to that spa as you like. Plus, you get sports nutrition, transfers to and from the airport, and you can bring a non-riding partner or family too.

You get three guided rides over your three days: 25 to 100km if you come on the beginners weekend, 100 to 210km on the advanced one, all with a support vehicle and technical backup.

Prices start at £435. For all the info go to www.fitness12retreats.com.