Garmin has announced a new top-line bike computer, the Edge 1000, that looks to be aimed at taking segment-based timed riding away from Strava and on to Garmin’s own website, Garmin Connect.

As well as the features focused on achieving fast segment times, the Edge 1000 offers bike-specific navigation and mapping capabilities and the ability to display your current gear if you run a Shimano Di2 electronic shift system with D-Fly Data Management. 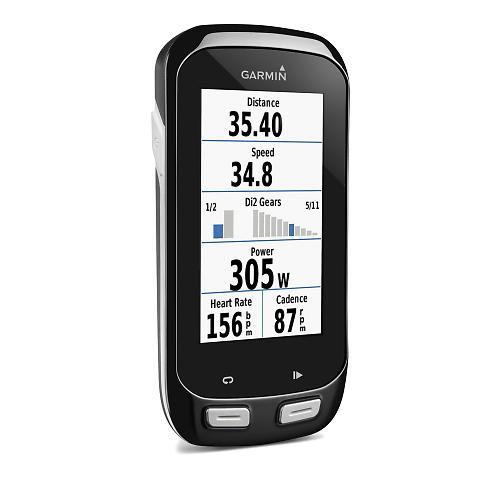 Okay, that’s a lot of information. Let’s start at the beginning… “Whether riding for a personal best or seeing where they stack up against the pros, Edge 1000 will help cyclists reach their goals with advanced segment capabilities including the ability to view start and finish point alerts, race themselves or the segment leader, and plan rides using segments,” according to Garmin.

Planning rides using segments on Garmin Connect will not be available immediately but will be added through future software updates. Garmin don’t say exactly when this will happen. The small print actually says that ‘no forward-looking statement can be guaranteed’, although Garmin clearly see it as a central feature of this release.

There will be segment leaderboards and you'll be able to ride against a Virtual Partner that automatically synchs with your previous best or the overall segment leader. In other words, the Edge 1000 will tell you how you're doing against the best time – either your own best time or that of the fastest rider over the segment. You can compete in real time and receive notifications before, during and after you’ve ridden the segment.

What’s just as interesting as what Garmin say, is what it doesn’t say. There’s no reference to Strava. The Edge 1000’s segment features are not compatible with Strava segments, just those on Garmin Connect.

According to Garmin, once a user creates a segment on Garmin Connect, it will use the existing users’ activities to populate a leaderboard – so it’ll be a lot like Strava, but not Strava. That sounds like a statement of intent from Garmin that they’re going after Strava traffic. The Edge 1000 also offers many features already available on other Garmin Edge bike computers, such as bike-specific navigation and mapping capabilities, instant uploads to social media and live tracking, which allows your family and friends to follow your progress online in real time if you use a smartphone alongside the computer. You can upload and download data to/from Garmin Connect while you’re on the go.

The Edge 1000, like the Edge Touring, comes preloaded with maps and points of interest, including parks and trails. You can use it like a car GPS to get turn-by-turn directions to a destination, and if you have a particular ride distance in mind you can ask the computer to suggest up to three bike-friendly routes.

The display is similar to that of the existing Edge 810 and 510 computers. It is a 3in high-resolution colour touchscreen, and you can customise the pages to show the information you want. It has an ambient light sensor for riding at night and through areas of changing light. 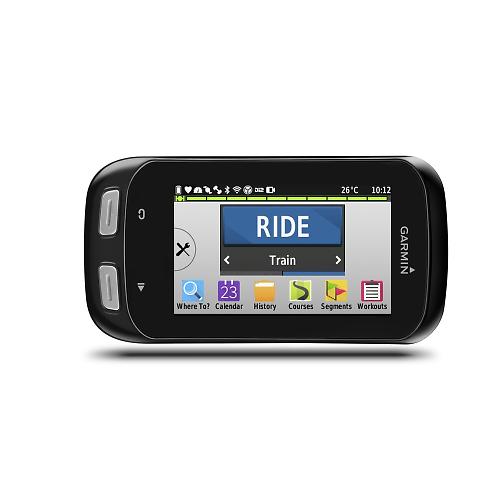 Interestingly, a future software update (again, there’s no timescale on it) will make the display dual orientation – so you’ll be able to read it vertically (a tall, narrow screen), as normal, or horizontally, giving you a low, wide screen.

The Edge 1000 is compatible with ANT+ sensors so you can partner it with a heart rate monitor strap, for instance, or Garmin’s new speed and cadence sensors. The self-calibrating bike speed sensor tracks speed and distance if GPS isn’t available. There are no magnets to line up so it should be simple to switch these sensors between bikes.

It’ll work with ANT+ power meters like Garmin’s own Vector system too. The Edge 1000 comes with a preloaded power-based workout that will calculate your functional threshold power (FTP). You can use this as the basis for power training zones.

The Edge 1000 also becomes the first Garmin bike computer to be compatible with Shimano’s Di2 electronic shift systems with Shimano’s D-Fly Data Management function. This means you can have your current gear displayed on the screen (the second-bottom line in the picture below) along with the battery level. 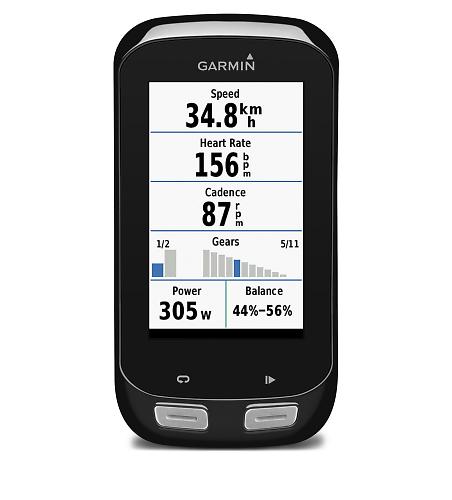 If you have an iPhone 4s or later, you can get incoming call and text message alerts on the Edge 1000, and it’ll work with the new Edge Remote too. This is a lightweight remote control that allows you to control the computer without moving your hands from the handlebar. We imagine this is going to be popular with time trialists, for example, who don’t want to shift out of their aero position. 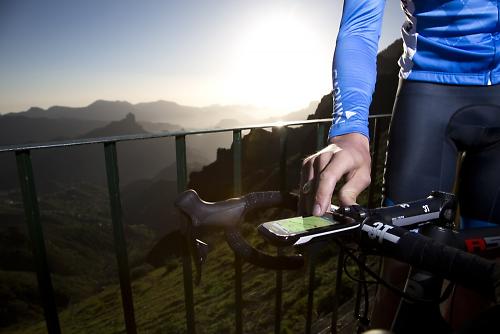 Garmin says that the Edge 1000 has a battery life of up to 15 hours and it will be available from the first week of May at £439. A bundle including Garmin’s HRM3 heart rate monitor and new speed/cadence sensors will be £499.

For more info go to www.garmin.com.