James Hayden has won the 2018 Transcontinental Race, the sixth edition of the self-supported race founded by the late Mike Hall, completing a gruelling 3,405.9km from Belgium to Greece in just 8 days 22 hours 59 mins.

That's an astonishing time and a smidgen quicker than the 9 days 2 hrs 14 mins that won him the 2017 edition of the TCR. But it's the stopping time that is scary, just under 1 day 18 hrs. Now, while we wait for James to recover before giving his race-winning speech (they do that in the TCR do they?) here's a quick look at the bike he rode to victory.

He’s once again supported by Fairlight Cycles. Last year riding the company’s Strael disc-equipped steel bike, and this year switching over to the Strael 2.0 bike in a size 58R. The new model has a few changes of which you can read all about in our in-depth review here. It looks like James stuck with largely the same equipment. Fair enough, if it worked well last year there’s no reason to make any radical changes. That means a Shimano Ultegra Di2 groupset with a Rotor Power2Max power meter crankset.

The interesting bit is the gear ratios and shows James has really sweated the details because he’s been riding 46/34t chainrings with a 13-34t cassette. No, you can’t buy this cassette, Fairlight rigged it up by combining sprockets from two donor cassettes. What a brilliant idea at achieving the desired ratios and gear jumps. 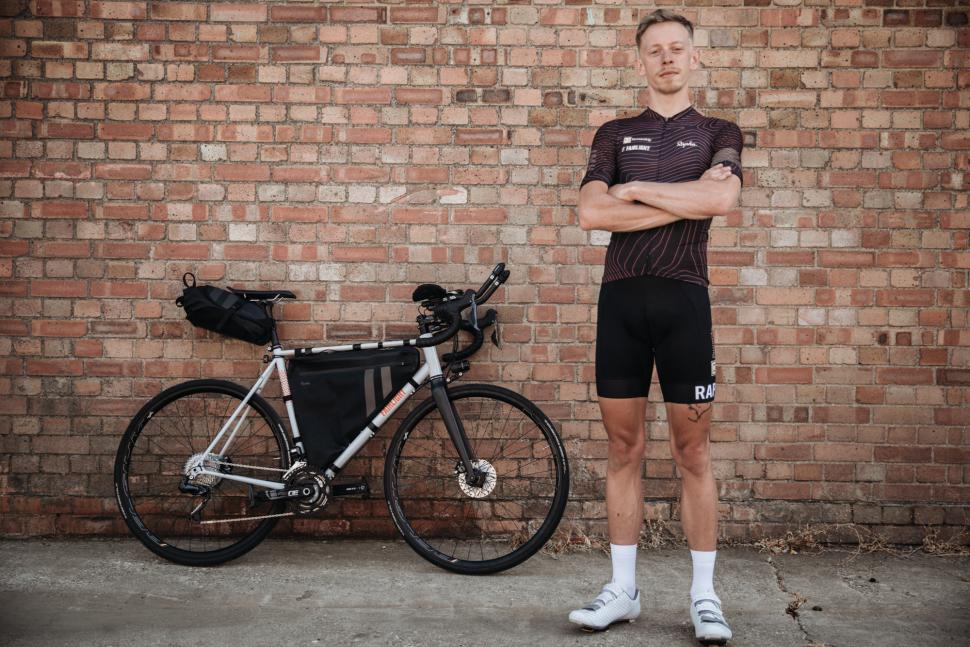 Wheels are a Hope RS4 rear hub and SONdeluxe dynamo front hub (a bikepacking essential) laced to HED Belgium rims with 32 spokes. Continental GP4000 tyres in a 25mm width may seem an odd choice given how rough some of the roads are, but we’d imagine on the HED rims that the tyres actually measure closer to 27 or 28mm. Extra width without the extra weight. He’s also running inner tubes. I’d have thought tubeless would be preferable but maybe it’s just the simplicity of changing an inner tube in the middle of nowhere that inspired this choice?

Providing extra comfort is a Canyon VCLS seatpost, a really good choice as the novel split post design provides a noticeable amount of extra deflection at the saddle. His saddle is a stripped back ISM 1.0 saddle, same as he used last year.

Handlebar and stem come from FSA and he uses Profile Design aero bars, and a black Hope headset and seat clamp tie it all together. It’s the same luggage approach as we saw last year, with a massive front triangle filling frame pack that neatly houses a 3-litre bladder and a seat pack. They are both prototypes provide by Rapha. Talking of Rapha, the British clothing company has stepped up to provide James with custom printed Pro Team shorts and jersey, with a design inspired by maps given map reading skills are a pretty important requirement for bikepacking enthusiasts. The dark colours are for chosen for practicality but there are reflective accents for night riding. He also uses their shoes, socks and glasses. Chapeau James, have a beer on us!

Thanks to https://fairlightcycles.com/ for providing the pictures and info.

We'll have more on this ride soon.