Here’s the actual bike that Peter Sagan rode to victory in Paris-Roubaix at the weekend, which differs quite a bit from the bike you or I can purchase. You can buy a replica gold Roubaix (or Tarmac) if you want to emulate Sagan on your local club ride, if only in appearance and not raw speed.

It’s a Specialized S-Works Roubaix, the latest version of which was launched last year with an all-new frame design, incorporating a spring in the head tube called the Future Shock, and available only with disc brakes. 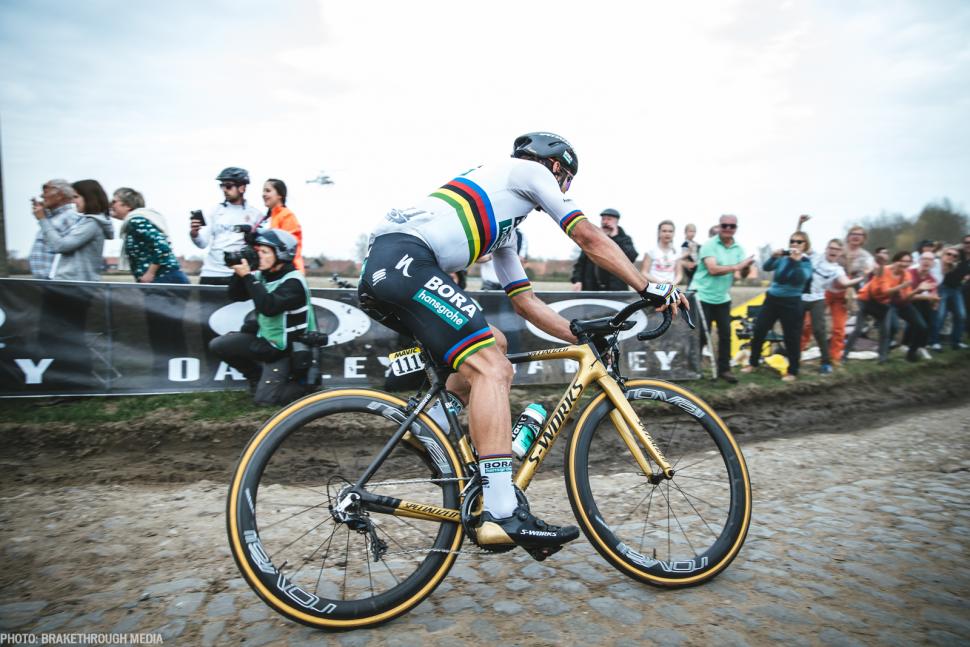 But Sagan’s bike doesn’t have discs, it has rim brakes. We’re guessing due to requests from the team for a rim brake bike force the US company to rather embarrassingly produce a team-issue version of its new bike with discs swapped for rim brakes. It happened last year immediately after the launch, but it’s a little surprising to see it again this year. When we spoke to Specialized about this same thing last year, they told us it will be "homologated under UCI regulations to allow it to be raced at Flanders and Roubaix in 2017, but production will be minimal."

Despite the big bike manufacturers getting full behind disc brakes and a lot of the latest endurance bikes, which are used heavily at this cobbled race, not everyone wants disc brakes yet. It would appear a lot of the pros aren’t really ready for them or, at least, aren’t prepared to take a risk on a new unproven technology when there is so much at stake. That’s the odd thing about Paris-Roubaix. On the one hand, it’s the perfect proving ground for new bikes, wheels, tyres and products and a win is the perfect marketing story for any brand. Win on Sunday on Roubaix and sell on the bike shop floor on Monday. If a product can survive this race it’s probably fine for pootling around the country lanes at a more modest pace.

So over the years, we’ve seen a lot of bike brands pour considerable development into producing innovative products aimed at providing a competitive edge for their pro racers, whether it’s accommodating wider tyres or integrating suspension or flex zones. 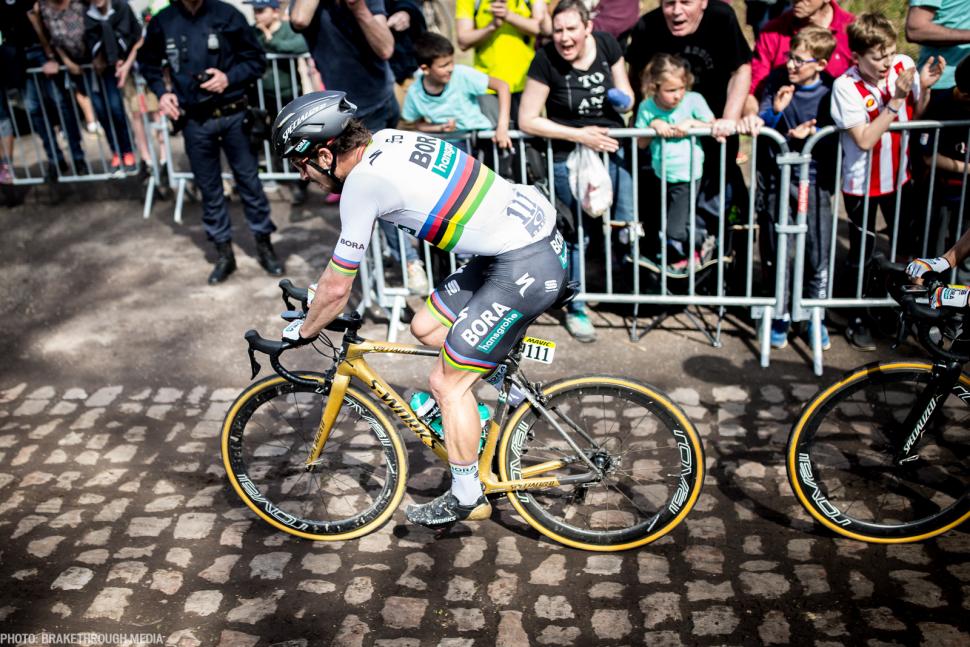 But on the other hand, it’s a race where tradition and the tried-and-tested mantra has often proceeded over anything new and shiny the bike brand might present to the team. For years this race served as the last bastion for the traditional aluminium rim, and it’s not so long ago that cyclocross bikes were used because the race bikes wouldn’t take wide tyres. And stories about aged tubular tyres left to hang in cellars so mature nicely steel do the rounds.

Tradition has been facing a tough battle against modern technology in this race.

Other than the rim brakes, Peter Sagan’s Roubaix is largely the same as the one you can buy in the shop. There is one notable change however, it looks like Specialized has developed an adjustable FutureShock. This likely allows you to lock out the spring, for the road sections, and unlock it for the cobbles. If you watched the race you could see Sagan operating it before hitting a section of pave. 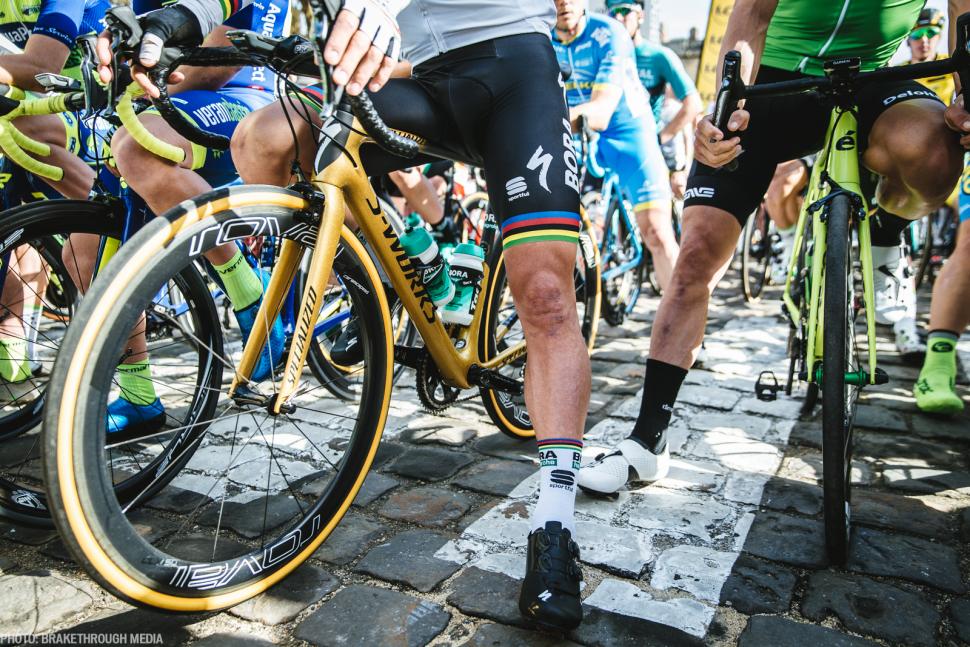 It’s very likely this will eventually find its way onto production bikes. When I tested the Roubaix following its launch last year I was very impressed by how comfortable the FutureShock made riding over rough roads, but even on smoother roads or climbing out of the saddle, I didn’t find it intrusive. Still, I can see a lot of people liking the option of being able to lock it out.

Another prototype on this bike is the direct mount hanger that has been machined to work with the Roubaix dropout and Dura-Ace rear mech. Another mountain bike development, the idea of a direct mount is to provide a stiffer connection between the mech and frame for more precise shifting.

Sagan opted for a mechanical Dura-Ace groupset, as he prefers the mechanical shift levers over Di2’s buttons for racing on the cobbles. He’s not alone, a few other top pros, such as Fabian Cancellara, have displayed a preference for mechanical shifting when it comes to racing on pave. It’s very much a personal preference thing though, most of the peloton do stick with Di2. One of the benefits of the electronic system is the option fit additional shift buttons to the inside of the drop or on the tops, providing extra shifting positions. 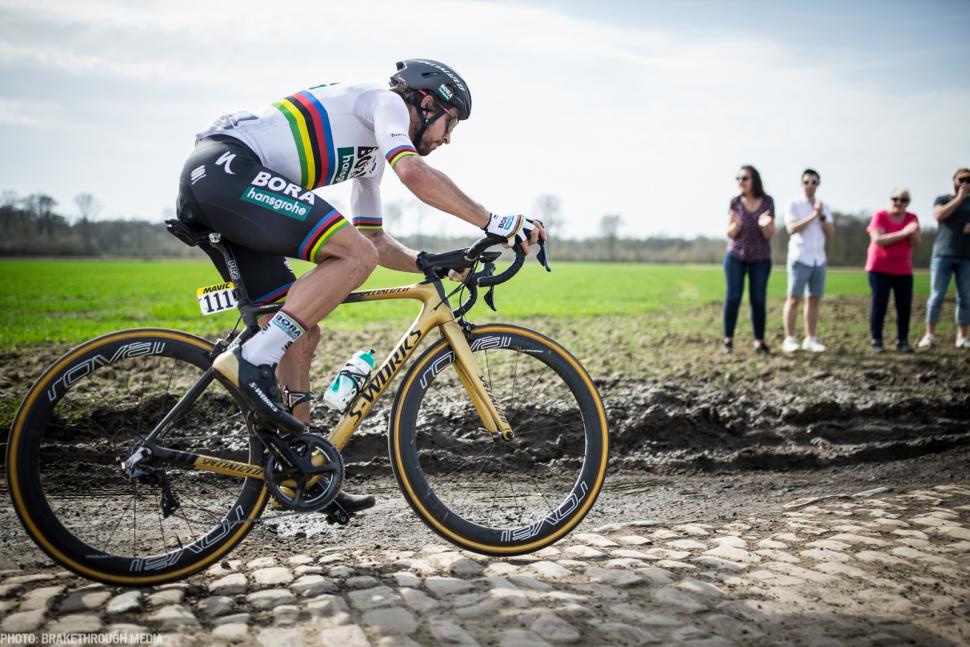 Gearing comprised a close ratio 53/44t chainset and 11-28t cassette, no need for much wider range than that at this race which is largely flat. You can also see how much his chain is dancing around on this section of cobbles. That’s what the new Ultegra RX mech with its clutch-style mechanism is intended to reduce, preventing the risk of the chain dropping off the chainset and also reducing the noise of the chain slapping the chainstay.

Shimano Dura-Ace direct mount brake calipers were used instead of disc brakes, so that meant a new fork and new seatstays had to be designed. According to Shimano, the widest tyres supported are 28mm but it looks like 30mm tyres might just about fit based on what we saw at the race. Rolling stock comprised the same Roval CLX 50 carbon fibre tubular wheels he normally races, proving the toughness and versatility of this wheelset. Specialized also supplied its own Hell of the North tubular tyres, developed for the demands of this race, in a 28mm width.

Other details include an aluminium PRO handlebar and carbon fibre Zipp Sprint stem, with the logos taped over.  Did you spot Sagan tightening his stem bolts during the race? Things can rattle loose on the cobbles; I’ve had to stop and tighten bottle cage bolts when I’ve ridden over the cobbles in the past, even when you thought you thoroughly tightened them.

The Pro sponsorship extends to the seatpost as well, meaning he can’t use the excellent Specialized CG-R post which provides impressive seated comfort through a carbon fibre layup and design that increases the fore-aft deflection. Another interesting detail that we didn’t notice at the time, Sagan also opted to go back to the older S-Works 6 shoes and not the newer S-Works 7 shoes that were launched recently, and which he has been seen wearing since. He really did not want to take any chance in this race.