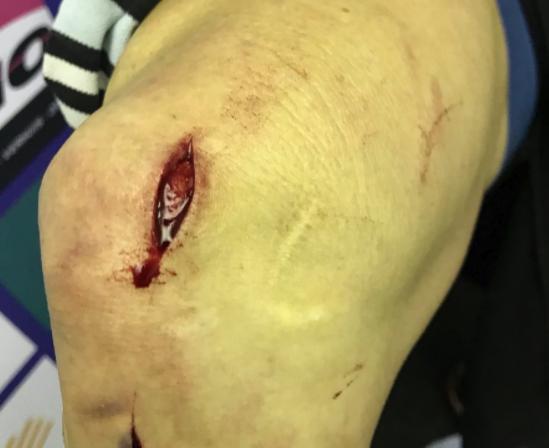 The disc brake debate has hit social media again with cyclocross racer Katie Compton’s husband sharing a gory picture of a badly cut knee, apparently caused by a disc brake rotor. We say apparently because we don’t know the full facts of the incident that occurred.

The said incident took place in a cyclocross race in Lille at the weekend, Katie Compton’s final race of the season. The injury was the result of two riders squeezing Katie on the first lap and causing her to crash, and we presume her knee impacted a disc rotor.

What happens when two riders make poor decisions and can’t be patient on the first lap and squeeze Katie into a crash? Disc rotor cut to the bone. Not a happy way to end a great seasonpic.twitter.com/7ORlxqWXh0

Despite the deep cut, Katie finished the race, ending up 7th overall, an impressive ride considering the circumstances.

Disc brakes have become commonplace in cyclocross, the first UCI sanctioned discipline that was allowed to use disc brakes. Their uptake was slow at first, but now most of the world cup racers are using them. Spotting a cantilever brake is rare these days.

There haven’t, to our knowledge anyway, been any disc brake incidents in any big cyclocross racers (but if you know of any feel free to correct us in the comments section). It’s on the roadside where there has been much drama, with several injuries wrongly attributed to disc brakes.

In further comments posted to social media, she said: “The good thing about disc rotor slices is that they don’t hurt till much later and the bleeding that doesn’t want to stop cleans the wound nicely.”

Some action has been taken to try and reduce the likelihood of a disc rotor causing an injury. Rotors must now have rounded edges, and there have been various videos posted online of people placing hands on spinning rotors to demonstrate the effectiveness of the rounded edges.

- Road discs: what will they cut?

But does more need to be done? But some people have been calling for more protection, with lightweight covers mooted in some quarters of the cycling world. So far we’ve not seen any disc covers in use, and only one bike, the Parlee Disc TT, has covers but they are more for aerodynamics than safety.

Asked on Twitter if she thinks rotors do cut, Katie said: “They sure do. Like a hot knife through butter. Doesn’t mean I still don’t love them for the stopping power.”

But what do you think? Let’s hear your thoughts on this one. Is it a clear indication that more needs to be done to protect riders from potential disc brake injuries?