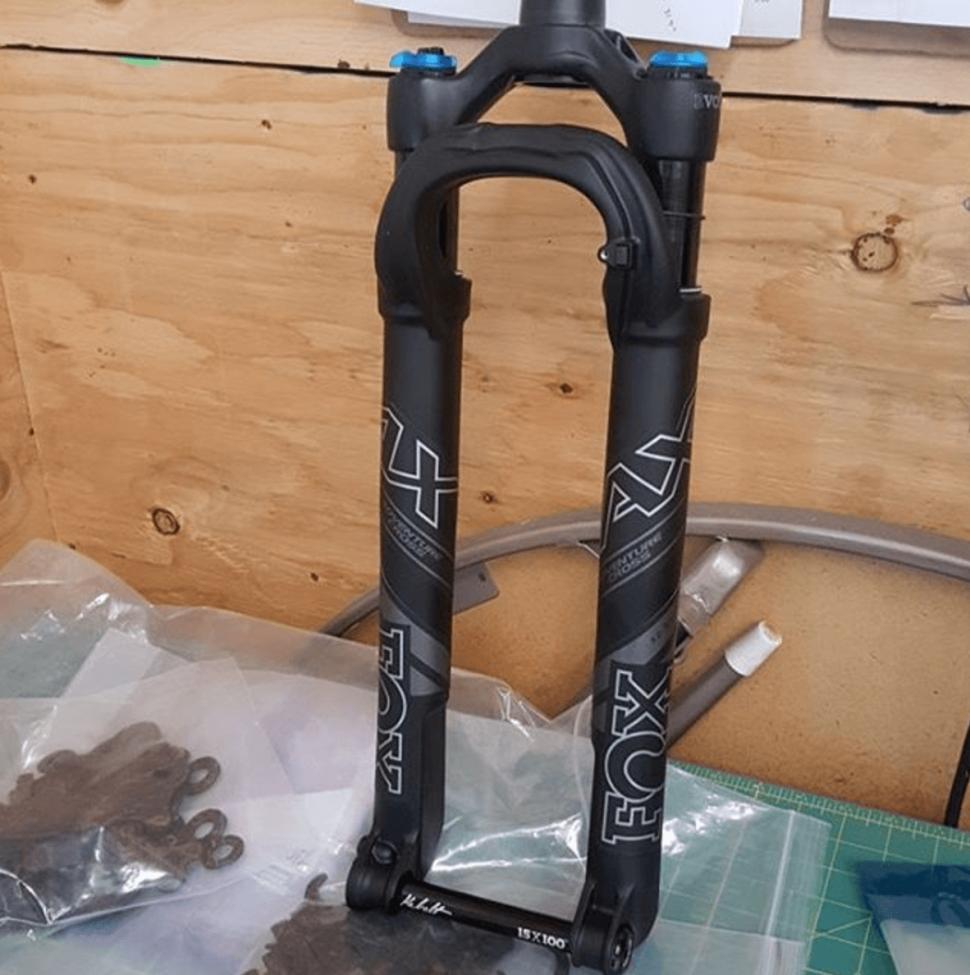 A photo shared on Instagram has confirmed that suspension manufacturer Fox is developing a short travel suspension fork for the adventure and cyclocross market.

It was first spotted a little while ago but the crop of the photo made it hard to say for sure it was a Fox, but this latest photo shared by a US framebuilder confirms our suspicions.

We still don’t know a lot about the fork, other than it looks remarkably similar to the company’s current 32 cross-country product. It appears to only be offering a small amount of travel as it’ll need to be compatible with the geometry of current gravel bikes. How much travel it will offer we don’t know, but guesses are that it will be similar to the 30mm that the Cannondale Slate Lefty fork provides.

The blue dial on the top left of the fork could be an adjuster for the compression, and it’ll most likely function as a lockout lever. Fox does offer travel adjust TALAS on some of its mountain bike forks so could it be looking at a travel adjustment feature here? Longer travel for very rough sections and short travel when it’s smoother?

Other notable details include the 15mm thru-axle, which is the same as found on Fox mountain bike suspension forks. But the road market has rapidly switched to 12mm so has Fox been caught out before it’s even released a new product?

Chris McGovern, who posted the photo on Instagram, shared this comment in response to the many replies he has had.

“I do think there is some merit to an adventure gravel bike, or whatever you want to call it, having suspension. You can run lower volume tires and still gain the suspension but keep the speed of rolling less tire. Instead of just throwing on bigger tires. Might be something to it. We do a lot long ass rides up here that you can really roll, that might have some gnarly sections in them….”

Do you agree? Think Fox is tapping into a new market here bringing a suspension fork to the gravel and adventure bike market? There have been previous attempts at road suspension forks, most notably with RockShox and Bianchi many years ago, but technology has moved on a lot since then so maybe the time is right to reassess suspension on a road bike?

Gravel and adventure bikes are certainly leaning ever closer to mountain bikes, and have already borrowed mountain bike tech like disc brakes, thru-axles and wider tyres, so why not suspension and dropper posts too? One thing is for sure, the traditional boundaries between road and mountain have never been this blurred, not since John Tomac put drop handlebars on a mountain bike.

1
Concerns over future of Sheldon Brown’s website as bike shop where he worked closes down
2
WiggleCRC to be taken over by German online giant
3
Rapha launches lightweight titanium accessories for bikepacking with Snow Peak
4
Pothole reportedly caused crash in which e-bike rider died
5
Kickstarter campaign cancelled for kit available only to those who ride fast enough
6
Supersapiens comment on UCI ban of blood glucose monitoring devices from in-competition use
7
Three chances to win with Hunt! Wheels, a ride in Tour of Britain team car and tubeless kit must be won
8
"Angry and fed up" female cyclist confronts male driver who made sexual remarks at her