​​Pinarello has today unveiled the successor to the Dogma F8, the new F10, and you guessed it, it’s lighter, stiffer and more aerodynamic than the old bike.

Despite the naming leap from F8 to F10, visually, it doesn’t look to be a big departure from the previous bike. Pinarello claims it’s 6.3% lighter, 7% stiffer and aerodynamic drag as been reduced by up to 20%, though, numbers that suggest a lot more change than the similarities would suggest.

Why no F9? We've no idea. We can only guess they've taken a leaf out of Cannondale's book in going from the CAAD10 to CAAD12, claiming there was so much technology advancement they felt a bigger number leap was necessary, but maybe there's another reason. Maybe they're saving F9 for another new bike? Or maybe they felt the F8 XLight was a sort of F9 in all but name? We'll try and find out.

The new Dogma F10 has been unveiled at the team’s training camp in Majorca (we’re not there, in case you wondering) and one of the riders has been filmed riding it. Team Sky says it’ll be phasing in the new bike throughout the season, but Chris Froome has been riding the bike loads in training to get familiar with it.

Froome said: "I’ve always valued the way Pinarello work so closely with the team and the riders. It’s a true partnership. They make sure they are providing us with the best possible equipment for all types of racing. They are always seeking to go one better and that’s what they’ve done with the F10.

“I’ve been working on the new F10 with Pinarello for a long time now and so I’m really looking forward to starting my season on it. It’s a natural born winner.” 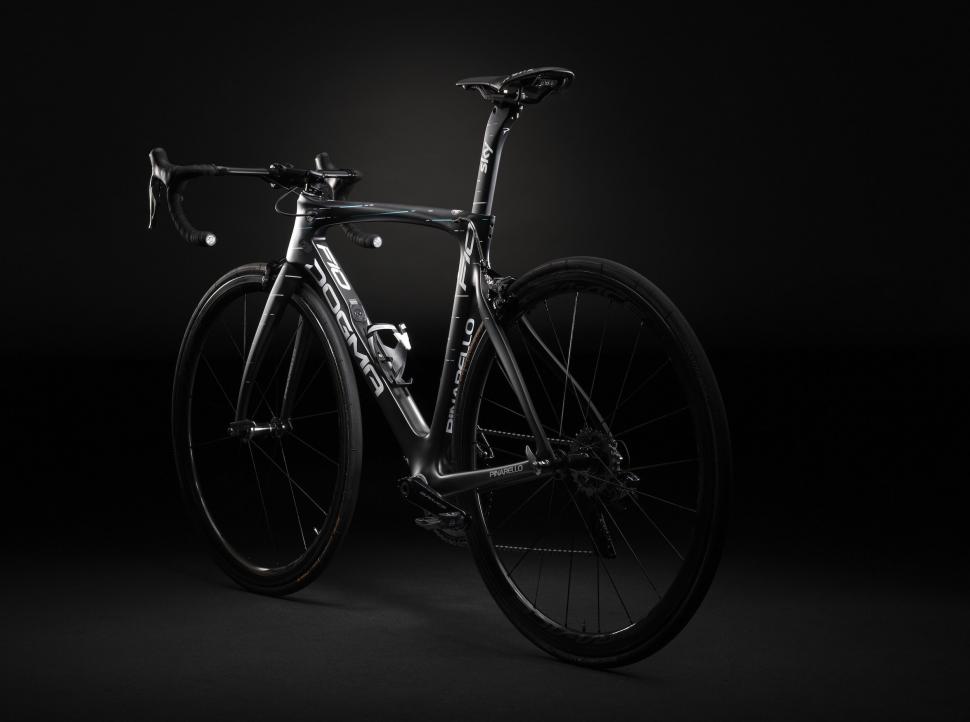 It’s three years since Italian brand Pinarello launched the Dogma F8, which heralded in the company’s first attempt at integrating aerodynamics into a road frame, along with weight and stiffness improvements. 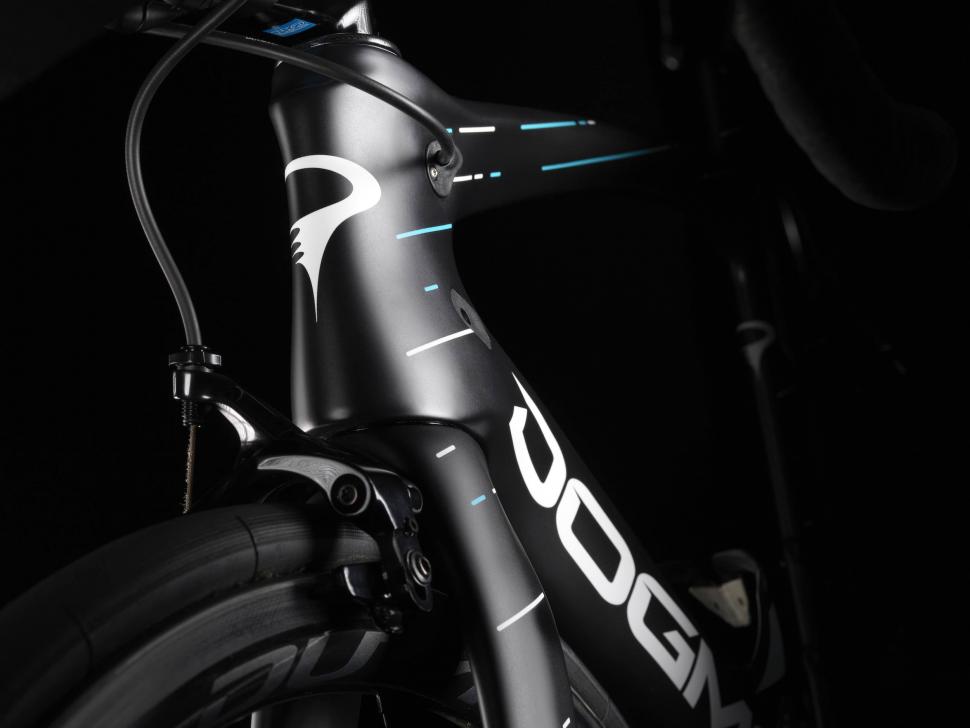 Those aerodynamic design features have had a slight overhaul, with lessons learned from the Bolide TT bike. A new down tube reduces drag bby 12.6% and new fork dropouts, which it calls the ForkFlap, knock another 10% off.

While retaining the “Flatback” down tube profile of the F8, the new bike takes a few more lessons from the Bolide TT, and the down tube has a shape that is designed to smooth the airflow around the water bottle, which is placed lower in the frame than before. Pinarello reckons that the down tube contributes to 15% of the overall drag produced by the frame. It claims to have made this change with no detriment to the lateral stiffness of the frame.

The changes add up to a claimed 20% drag improvement over the Dogma F8. In testing, Pinarello claims the new Dogma F10 saves 0.8 seconds per kilometre, which would save 2 minutes over 150km (though it doesn’t state what speed this result was achieved at).

Weight has been shed as well, and a frame comes in at a claimed 820g for a size 53cm. The Dogma has never been the lightest bike in the peloton, so this is a saving that will be appreciated by Chris Froome.

The Shimano Dura-Ace Di2 control junction box is now hidden inside a compartment in the down tube, so it doesn’t hang below the stem. Another change is the switch from dual pivot to direct mount brake calipers. 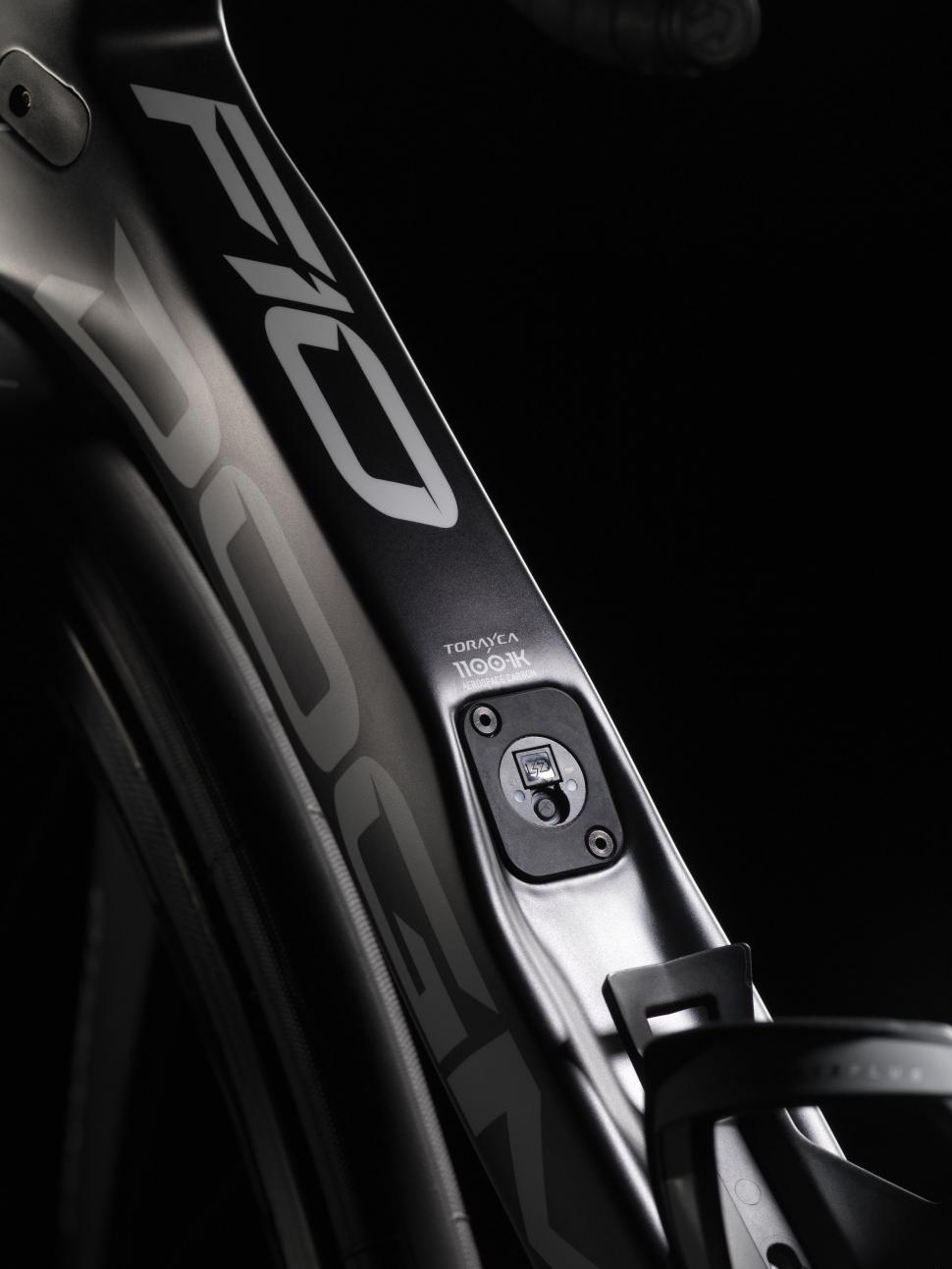 Pinarello has retained other key features of the Dogma F8, including the area seat post and integrated seat clamp and one detail that had many fans previously, the externally threaded bottom bracket.

“We’ve been working in partnership with Pinarello on this new model for a while now and so the whole team are really excited about the new F10,” says Sir David Brailsford.

“Pinarello have been a big contributor to our success and we have worked closely with them since our inception. We were delighted to renew our partnership with Pinarello last year. They are committed to innovation and constant improvement, so they are the perfect partner for Team Sky.”

Pinarello President Fausto Pinarello added: “Our new Dogma F10 is the eighth bike we’ve provided for Team Sky in seven years, and as usual, the last one is always the best one… Good luck guys!”

Will the new Dogma F10 provide a much better ride than the Dogma F8, which I was highly impressed with when I reviewed it last year? Hopefully, I'll get the chance to test it this year and find out. For now, watch out for the new bike in the WorldTour.