Fizik are to offer a choice of widths for their Spine Concept saddle range 0f Arione, Antares and Aliante saddles and a new free app in both Android and IoS versions to help you choose exactly the right one for you - all this comes on the back of three years research in collaboration with academics at the University of Colorado.

For those not familiar with the er, concept Fizik’s Spine Concept is based on rider flexibility. It groups people in to three distinct types: snakes, chameleons, and bulls - based on spine flexibility and the amount of pelvic rotation involved in your pedal stroke. You’ve guessed it, snakes are the most flexible - and the Arione saddle is designed for them - roughly 50 per cent of pros are snakes - it’s long and flat. Bulls are the least flexible with the most amount of hip rotation in their pedaling style - the Aliante is the saddle for them it’s more curved, and less flat for those with a more upright riding style (to be clear we’re not talking sit up and beg - these are all performance saddles) - some pros ride these too. Chameleons are those in the middle - quite a number of professional riders fall in to this camp - including the winners of all this year’s grand tours.

Buyers guide to cycling saddles + 17 of the best

Now Fizik have taken things further with what they’re calling Spine Concept Evo - which adds a choice of widths to the range: the new Arione with a choice of a 130mm standard fit and a wider 140mm version while the Antares and Aliante will be offered in a choice of 142mm standard sizes or 152mm wider sizes.

So, who should be sitting on a wider saddle - people with wider sit bones? No, no according to Fizik. (Well, not if it’s a performance saddle.)

The short answer to that question is: the faster, lighter and more flexible you are the narrower the saddle that’s best for you is likely to be. That would seem to validate the original Spine Concept - after all the 130mm Arione is the first choice of the majority of Fizik sponsored pro-riders and indeed a good number of non-Fizik sponsored pros too. But flexibility itself doesn’t denote speed - nor does a relative lack of flexibility equal a lack of speed or power - Chris Froome doesn’t ride an Arione and he’s no slouch. So Fizik set out to try to understand what were the determining factors in finding the most comfortable performance saddle and, no doubt, to see if their research revealed any gaps in their existing range that needed filling.

What's behind the wideness? The Italian company undertook a three year study in collaboration with Professor Rodger Kram of the University of Colorado integrative Physiology Department Locomotion Lab and they found that the width of your sit bones make no real difference to the width of the saddle you should be riding (they do if you ride a more upright bike). Instead what their research found was that the determining factors in whether a wider or narrower saddle would work better for a a performance cyclist was a combination of weight and power output/speed.

As an a example a 75Kg rider who can ride at a steady 28Km/h produces 2W of energy per kilogram on the flat and puts 29Kg of their weight through the saddle or 40 per cent with 15 per cent going through the bars and the rest the bottom bracket. 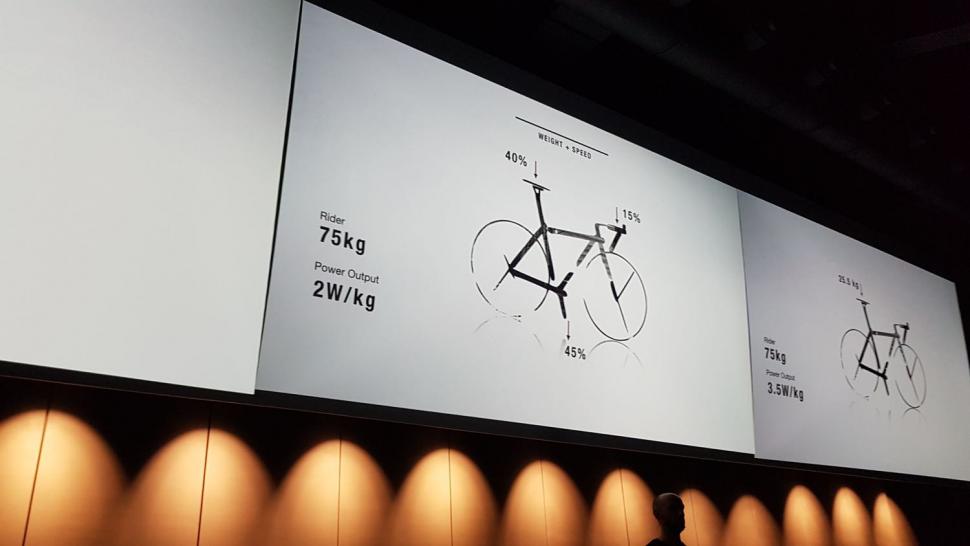 However a rider of a similar weight and flexibility who is slower puts more weight on the saddle and produces less power. Someone riding at 20km/h would produce 1W per kilo and put 32kg through the saddle - 43 per cent of their body weight. A faster rider than our 28Km/h man (and for the moment at least these are all men’s saddles) someone who could pelt along at 35km/h produces 3.5W/Kg and put a mere 25kg through the saddle according to Fizik's research.

To find all this out Fizik and Professor Kram’s team did a number of tests.

First they did a power study testing 200 riders of different types, sizes and weights in controlled conditions and measured what difference their power output had on the distribution of weight through the key contact points - from this they discerned that a power output of 1W/Kg = 3 per cent more or less rider weight on the saddle.

Next they looked at cadence - does leg speed have any effect on rider weight distribution? No, it turns out it doesn't.

Then they looked at hand position on the handlebars - how does this effect weight distribution on the bike? Not as much as you might think was the answer.

Then they looked at riders’ front/rear wheel weight distribution on the bike  - this was a particularly interesting test because as part of it they not only looked at rider’s positions on the bikes but also sent out riders to have bike fittings from all the major bike fitting systems - without telling them why - and then measured the front/rear wheel weight distribution of the resulting set ups.

Overall the range of weight distribution varied between 70/30 and 50/50 with many of the bike fits giving the most extreme results in either direction. One bike fit system produced a 70/30 weight distribution –  probably not ideal for keeping your front wheel down while riding up hill.

The researchers found that both pros and non-pros who had worked out their own positions on the bike all ended up with a remarkably similar front/rear weight distribution - around 62/38, as did the one bike fitting system that based the fit on what the rider felt was right.

The second finding was a tad more surprising: no matter where you moved a saddle people still tended to sit in exactly the same place - the centre of pressure location didn’t move - move the saddle back they’d still find that same spot adjusting the rest of their position on the bike to do so, ditto if you moved it forward. The only slight exception to this was for fast, flexible riders who did move around their saddles more.

The penutlimate test was a saddle discrimination ability study - after all they were going to need discriminating butts to help them draw meaningful conclusions from all the data they had gathered. To get a simple, repeatable test riders were asked to ride at 2W/Kg at 90rpm for half an hour. Then the 200 original members of the study were tested to see if they could feel what type of saddle they were riding. Turned out only seven of them could. Over a short period most of us can’t tell the difference between a flat saddle or a curved one, wide or narrow, or whether it’s got a cut-out or a channel - give it a bit longer and we can certainly say which one hurts, but that’s about it.

The Colorado researchers then had the task of finding more sensitive backsides - people who could tell the difference between the saddles they were riding without seeing them. Once they had found enough such people they began a comfort study with each rider testing 30 different saddles in a 2.5 hour ride including, as a control every once in a while, their own. They were asked to rate saddles on a scale of 0 - 50 with 0 being perfect.

Then they looked at the data to see if there was any correlation between the types of riders that preferred a particular type of saddle. And there was.

The upshot from Fizik’s point of view is that based on what they’ve learned they’ve moved to plug some perceived gaps in their range - with wider versions of their standard width Arione, Antares, and Aliante saddles. Interestingly the new wider 140mm Arione isn’t as wide as the standard Antares (which you might expect) because Fizik found that extra 2mm made a difference in perceived comfort for those flexible, but relatively slower riders.

There’s an app for it

To help you choose the right saddle Fizik have also fed all this data in to an app, out this week, and available in both IOS and Android - from the Google Play and Apple App Stores respectively and search for Spine Concept Evo (or hit the links in this article). The app uses your smartphone’s inbuilt accelerometer to measure your flexibility, and then asks you for your weight and your comfortable average speed on a flat road in wind-free conditions - it then recommends your ideal Spine Concept Evo saddle - oh, and an alternative, because there will be overlaps, and it may be that you are already riding a saddle that works for you in which case you may not want or need to swap to a wider/narrower/or more curved alternative. The app is free.

Fizik’s collaboration with Professor Kram and University of Colorado is ongoing and while they are still looking at saddles they are also turning their attention to other contact points on the bike too.