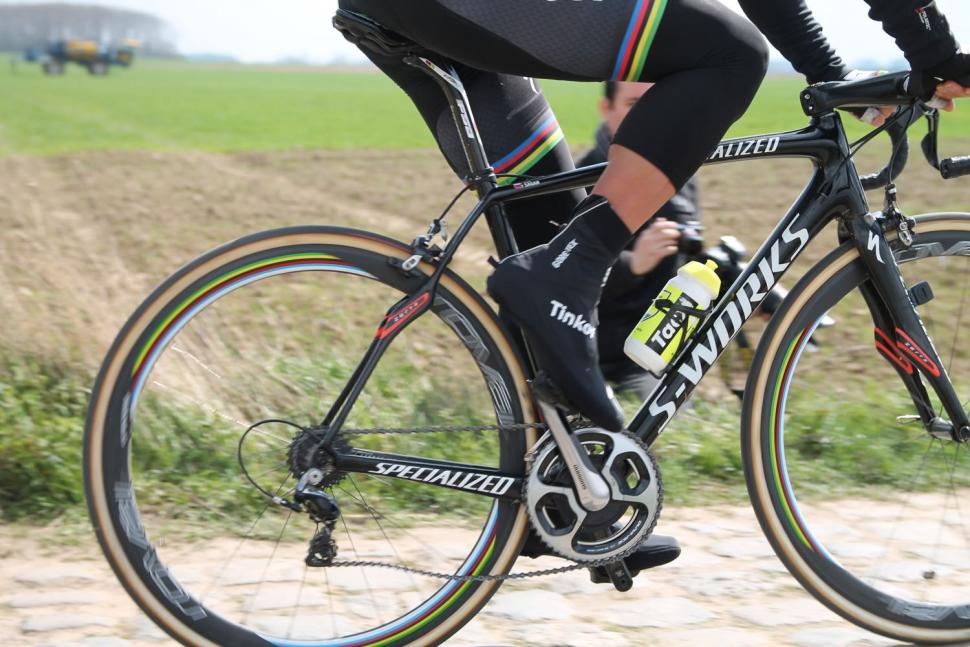 Peter Sagan and his Tinkoff team were out inspecting parts of the Paris-Roubaix course today, ahead of Sunday's big race. We stopped by the infamous Carrefour de l'Arbre, a 1.8km section of brutal cobbles that comes very near the end of the race, and as such is a pivotal stage for the race. 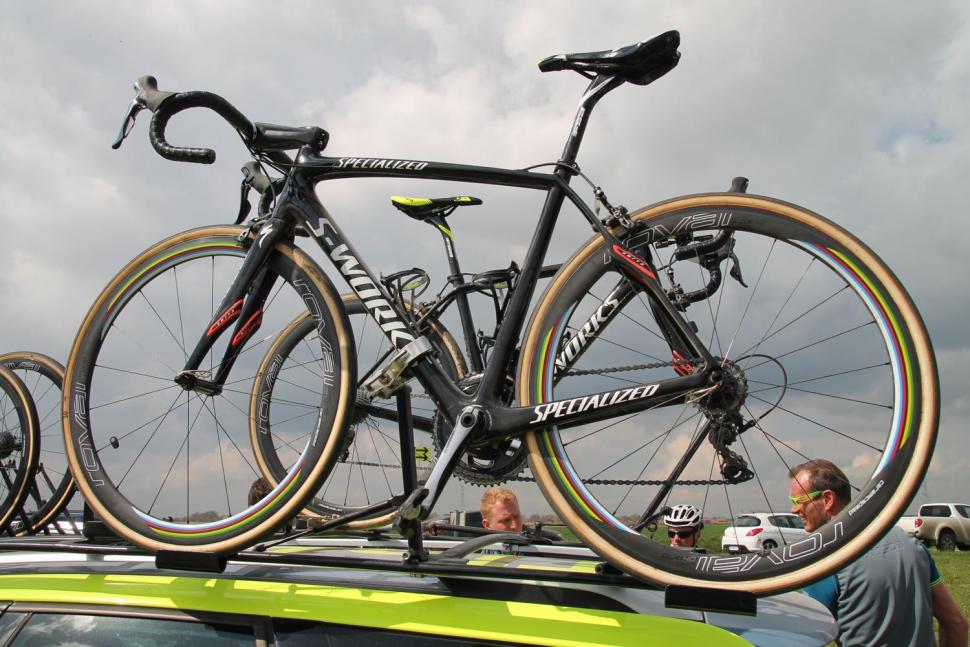 The Tinkoff team has switched to the Specialized Roubaix SL4, from the usual Tarmac, for this race. That's because the frame and fork allow space for the 30mm tyres the team is using, and because the geometry - longer wheelbase - and comfort features -Zertz inserts - make racing over the cobbled roads a little less punishing. 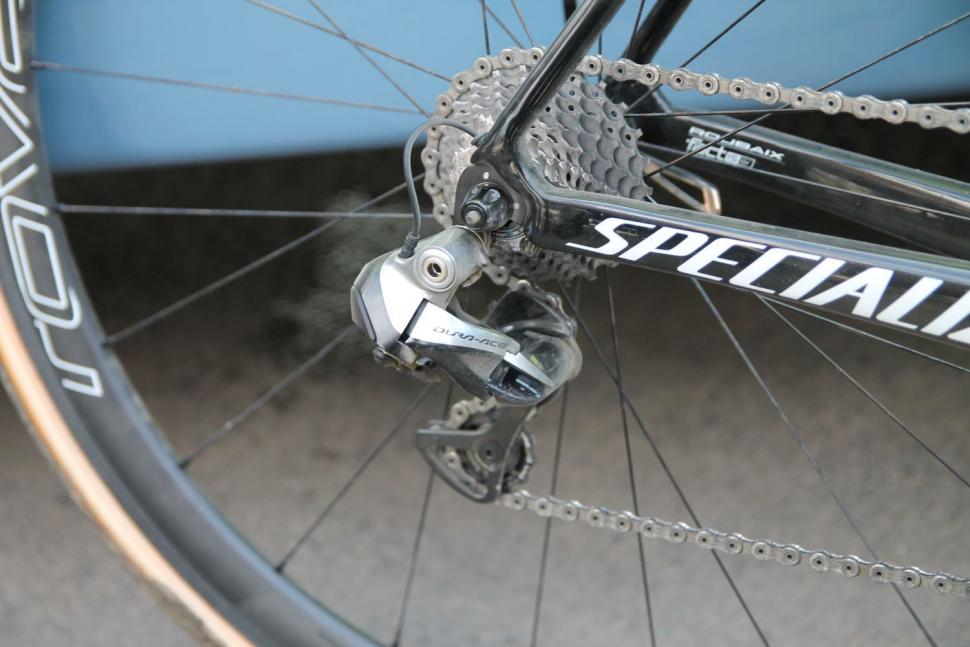 Peter Sagan normally rides Shimano's electronic Di2 groupset, but he has switched to mechanical Dura-Ace for Paris-Roubaix. The team mechanic only told us that Sagan asked for it and that he didn't know his reason for the change. Could it be a focus on ruling out the potential for any mechanical misfortune, not that Di2 is ever really that unreliable? 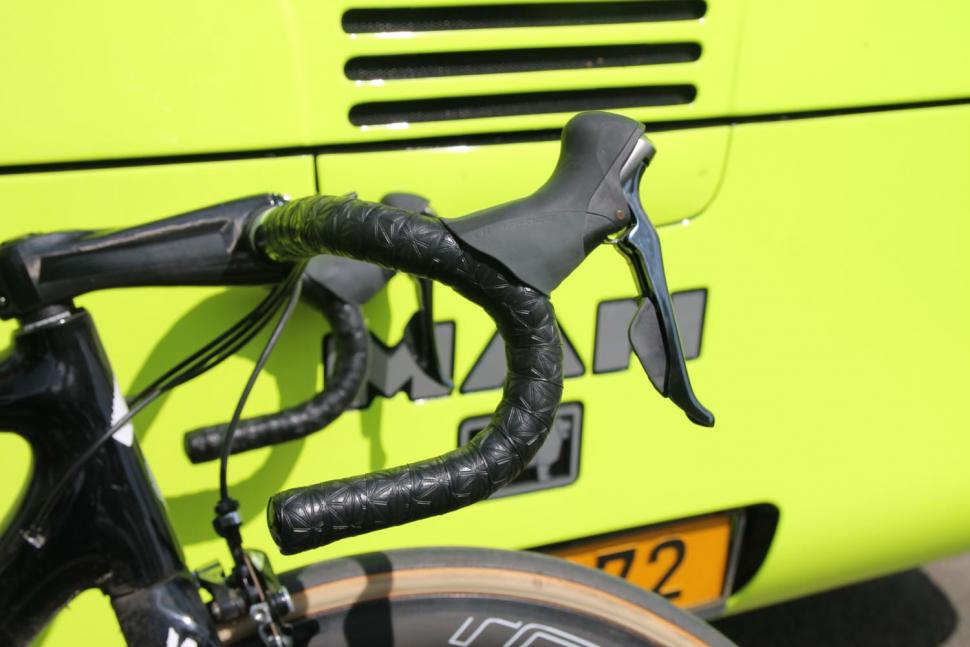 Fabian Cancellara is a rider that favours mechanical over electronic. For Sagan, it could be that he prefers the shift action when the bike and everything else is bouncing around on the cobbles. Changing gear on the cobbles isn't easy, maybe he finds it easier with mechanical rather than electronic.

Sagan has been swapping stems a bit recently. He had a Vision stem on his spare bike at Tour of Flanders, but raced with a new Zipp Sprint SL stem, but for Roubaix it looks like he has switched back to the older Zipp Sprint stem, with the logos taped over.  It's a normal traditional dropped handlebar as well. 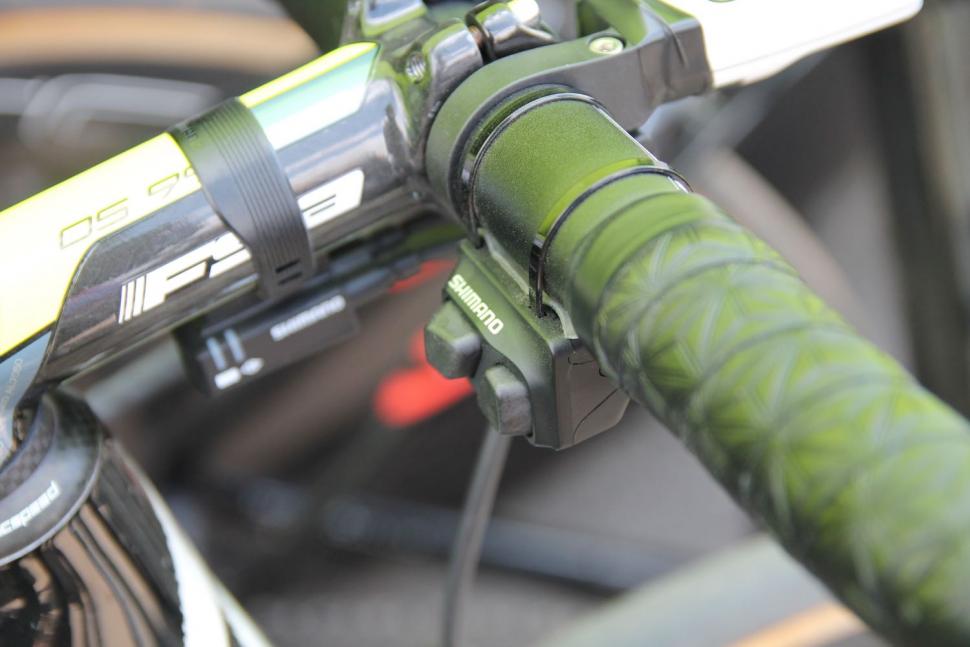 Switching to mechanical does mean he can't make use of extra shifters that Di2 allows, fitted the centre of the bars as in this example on another Tinkoff team bike. 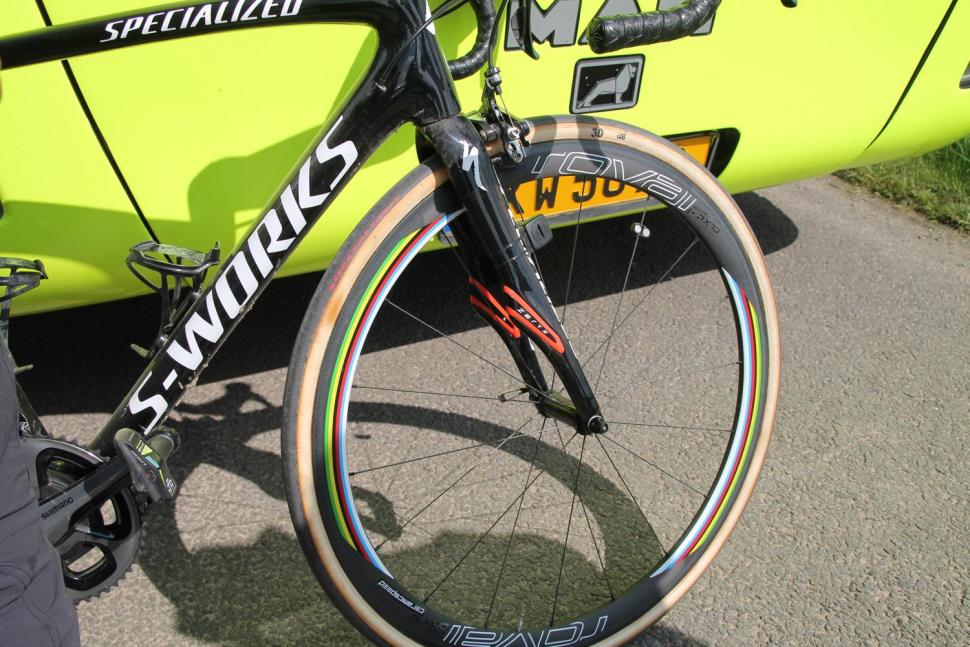 Sagan has got some new world champs decals for his Roval wheels. Very snazzy. 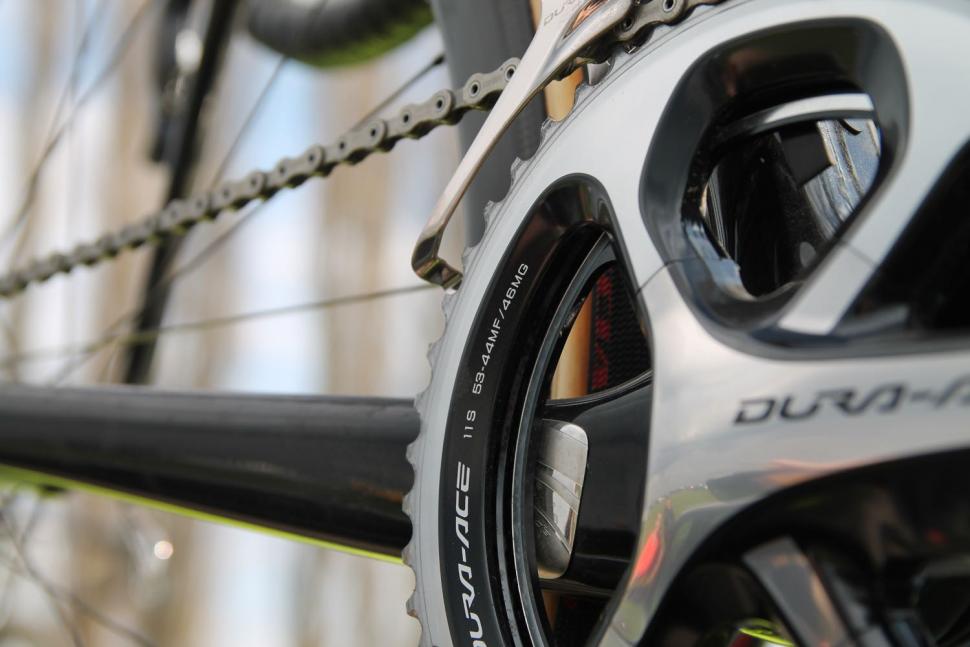 Gearing is modified for Paris-Roubaix. There’s no climbing to speak off, so an 11-25t cassette is combined with a 53/44t chainset. The riders will use the inner chainring and the close ratio cassette keeps the jumps between each sprocket very close. 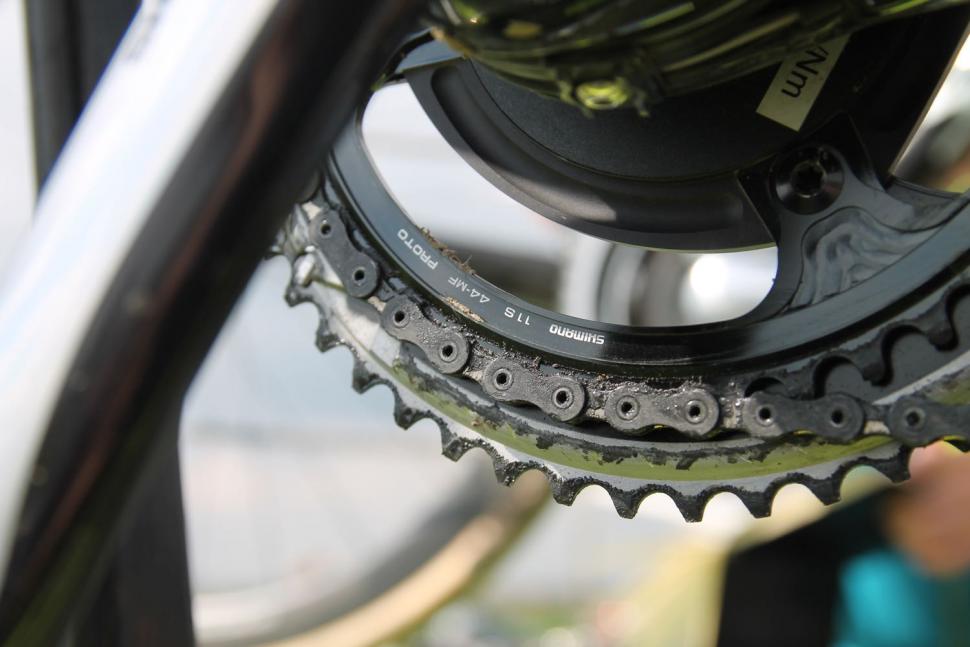 ‘Proto’ is marked on the inside of the chainring on his race bike. We don’t know what is new about it, but we’re going to contact Shimano and see if they can shed any light on it. 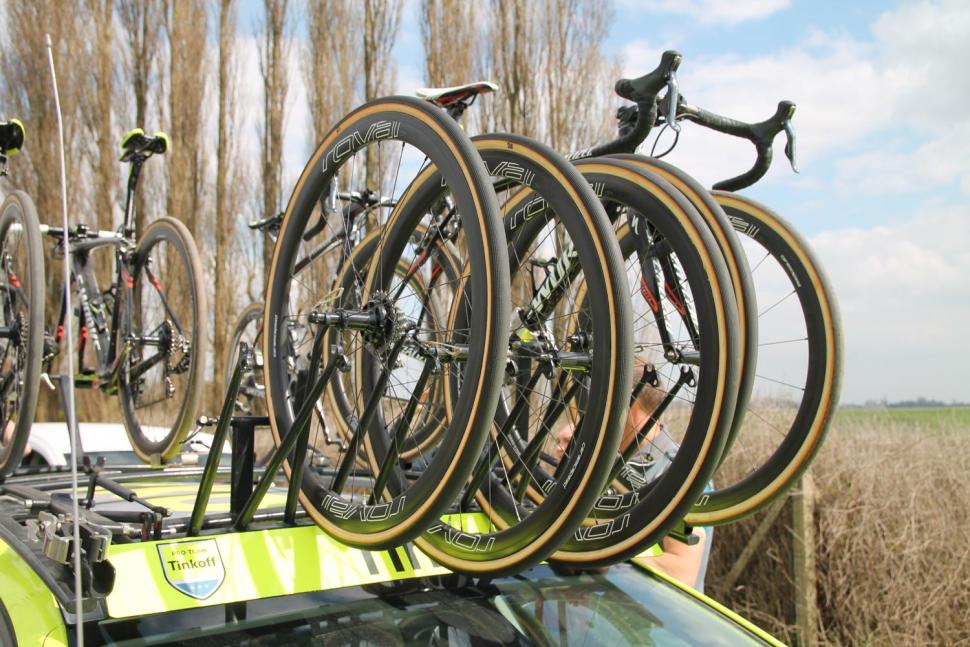 The risk of a puncture is much higher in this race, and a flat tyre at the wrong time can spell disaster. So the team car is equipped with plenty of spares. The Roval CLX40 Rapide is the wheel of choice, and it’s pretty much the same wheel the team uses for most road races. 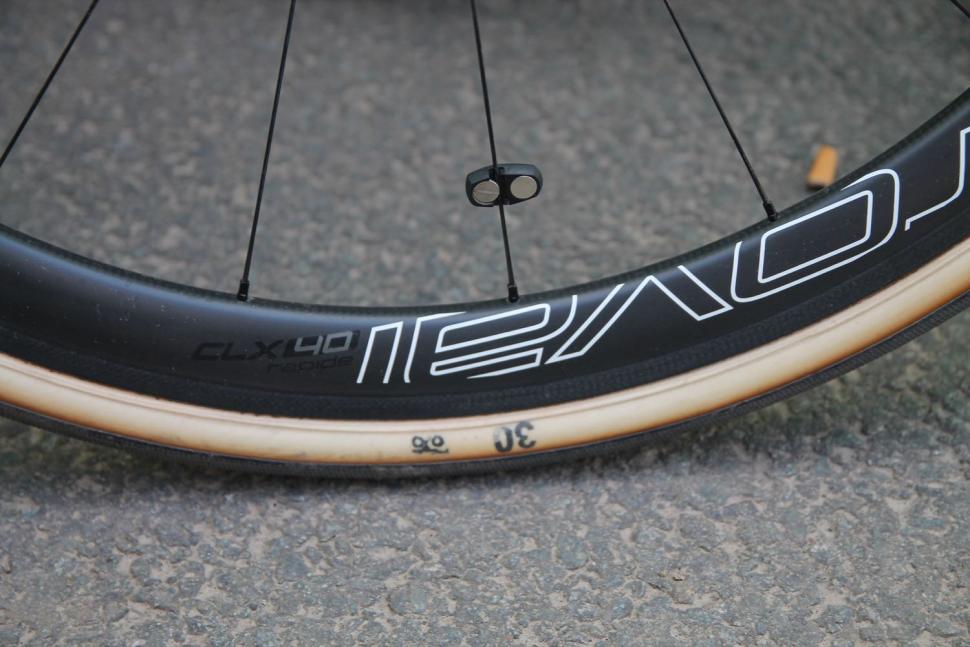 Tyres are 30mm wide and are from FMB, without doubt the most popular tyre brand at this race. Sponsorship demands tend to go out the window at this race, when the stakes are so high and the rider wants the best/right equipment to suit their personal preferences. 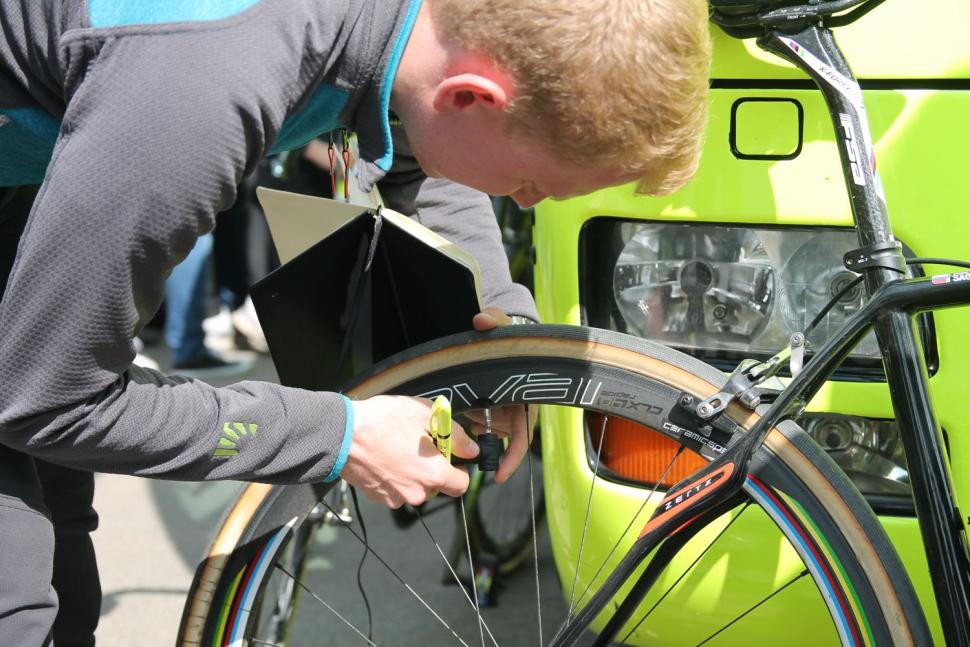 The Tinkoff team mechanics were carefully taking down the tyre pressures of each bike as they stopped by the team bus. They used digital pressure gauges to inspect the tyre pressure. They were also seen taken down feedback from the riders before they rolled off for the remainder of the planned ride. 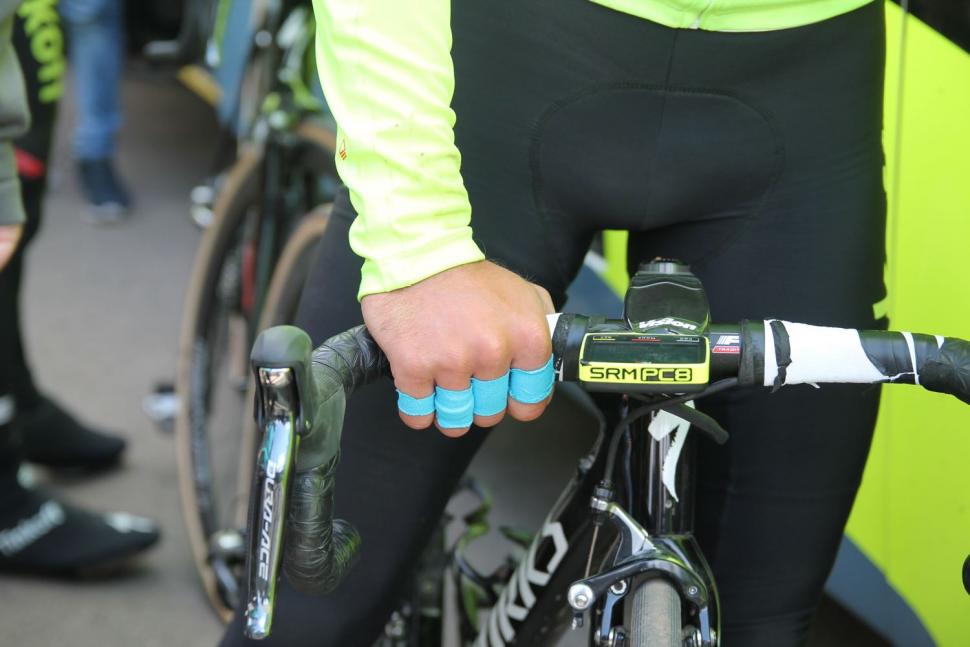 These taped hands belong to Adam Blythe. He was having a chat with the team mechanic about how much bar tape to use. It looks like he started the ride with double wrap tape, but then somewhere along the route ripped off the top layer of bar tape. Riders can be very fussy about their bike setup, and it looks like Adam prefers a thinly wrapped handlebar. Also notice his taped fingers. 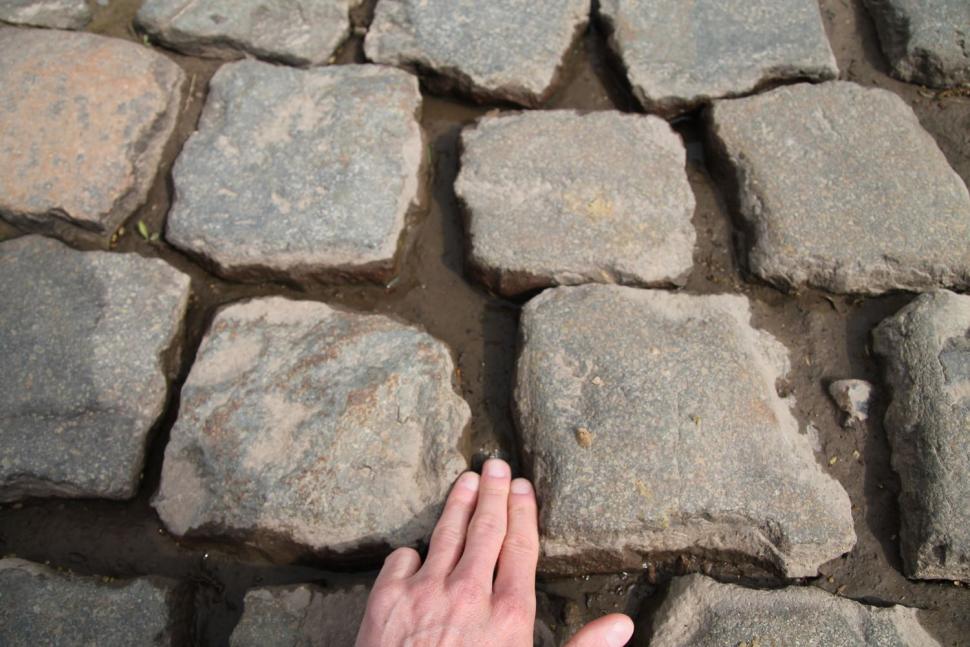 Wondering why all the fuss with endurance bikes and fat tyres? It's the state of the cobbles. In some places, it's quite smooth, but you don't have to walk far to find some poorly maintained cobbles.