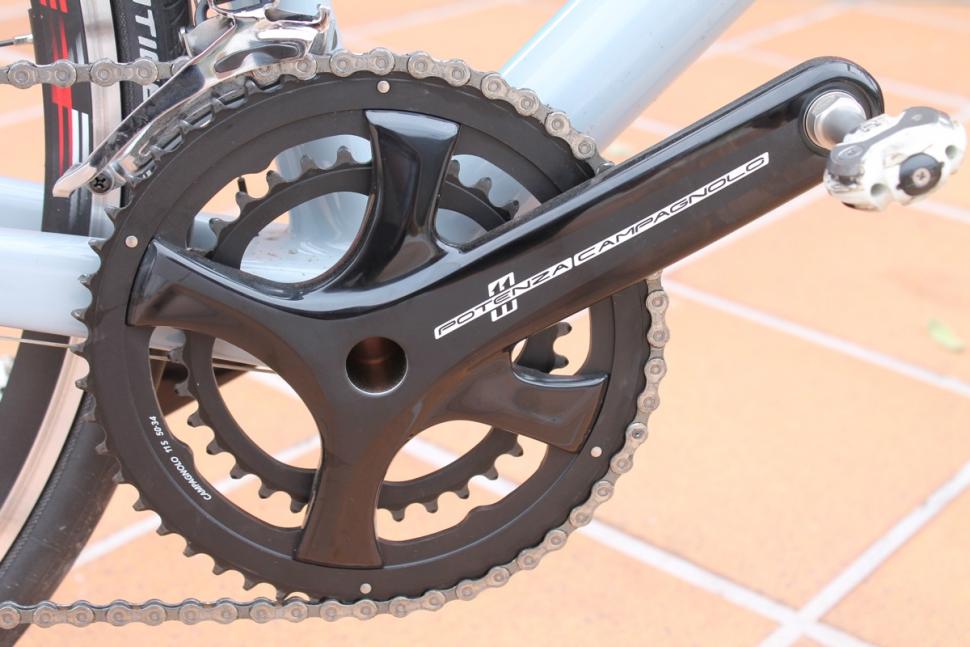 Campagnolo is launching a new 11-speed mechanical groupset called Potenza to sit below Super Record, Record and Chorus in its range hierarchy, designed to be a direct competitor to Shimano Ultegra, and we’ve been massively impressed by the performance.

Potenza is a mostly aluminium groupset and you get the option of low gears courtesy of an 11-32-tooth wide-ranging cassette. Existing Campagnolo components are designed for a maximum sprocket size of 29-tooth.

“Potenza is the Italian word for power, intensity and strength, and that’s what we try to bring to the groupset market,” said Joshua Riddle, Campagnolo’s Press Manager. “It’a s very powerful group that’s pegged right in the mid-range.”

That’s mid-range in Campag’s terms, below Super Record, Record and Chorus, and above Athena and Veloce. Ultegra, which Campag says is Potenza’s biggest competitor, is Shimano’s second tier groupset.

“We started with the Revolution 11+ groupsets that we introduced last year [updated mechanical versions of Super Record, Record and Chorus] and we’ve trickled the technology down to every single Potenza component, so you get Tour-winning performance in a more accessible groupset,” said Joshua Riddle.

“This is the top-end groupset in aluminium based products. It’s going to be pegged with Ultegra but with a little bit more soul!”

As well as being available aftermarket, Campag hopes that Potenza will be specced as original equipment on complete bikes. Shimano currently dominates that sphere with SRAM and Campagnolo far, far behind.

Let’s go through the components individually. The weights given here are Campagnolo’s own, we’ve not had the chance to put them on the scales ourselves.

The body of the Ergopower shifter is made from technopolymer reinforced with carbon-fibre while both of the shift levers are made from lightweight composite. 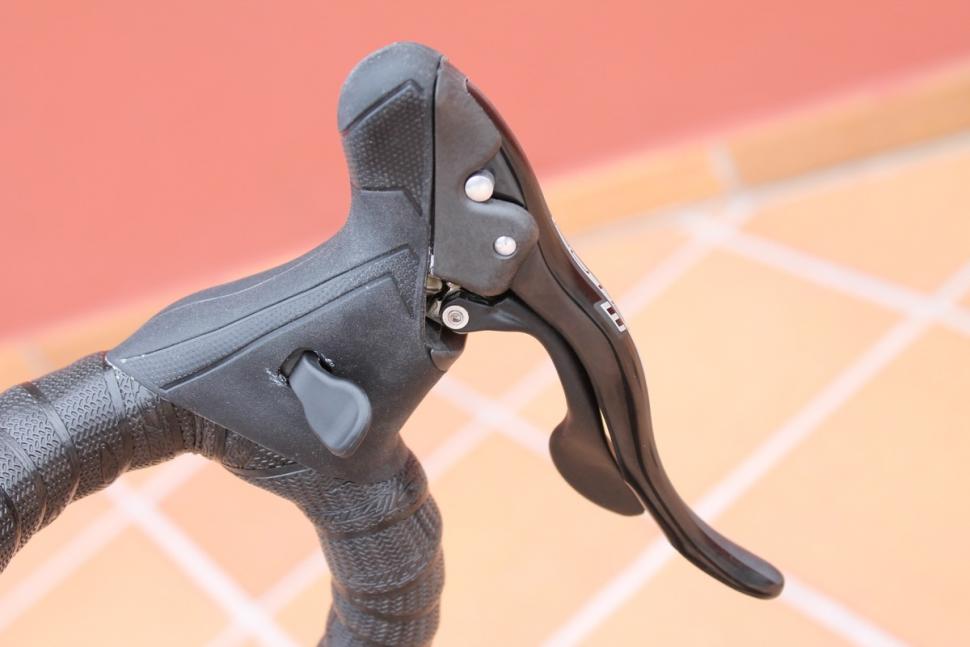 The aluminium alloy brake lever is the same shape as that of Campag’s top-end groupsets although the front of the shifter body is more rounded, the idea being to offer more hand position options. 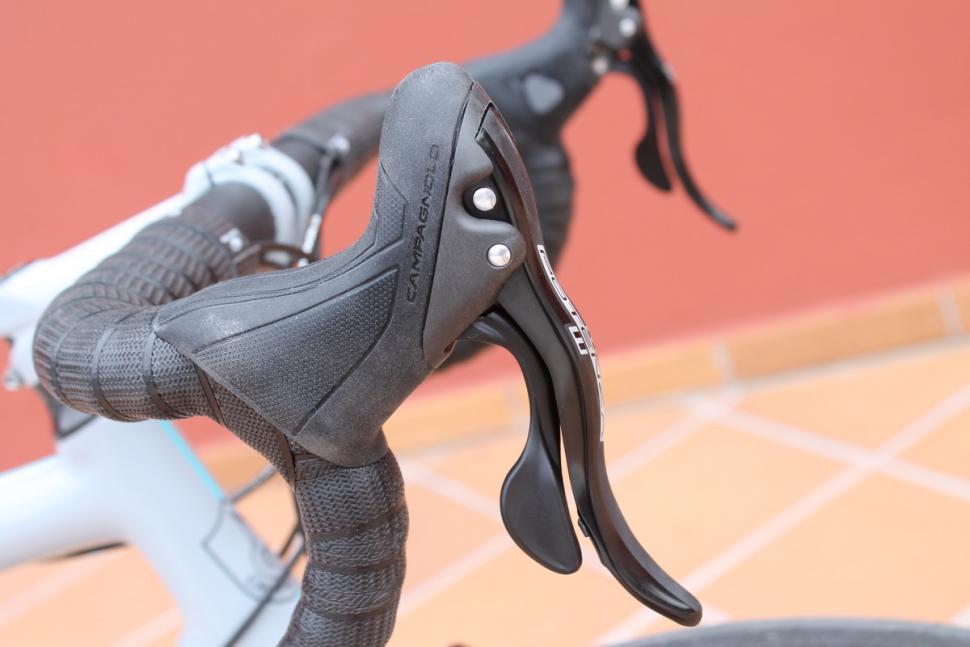 The hoods are made from a natural and hypoallergenic silicon material. Compared to existing Campag options, there are very few lines and groves in the hoods. This is to allow water to move away very quickly so that grip isn’t compromised. 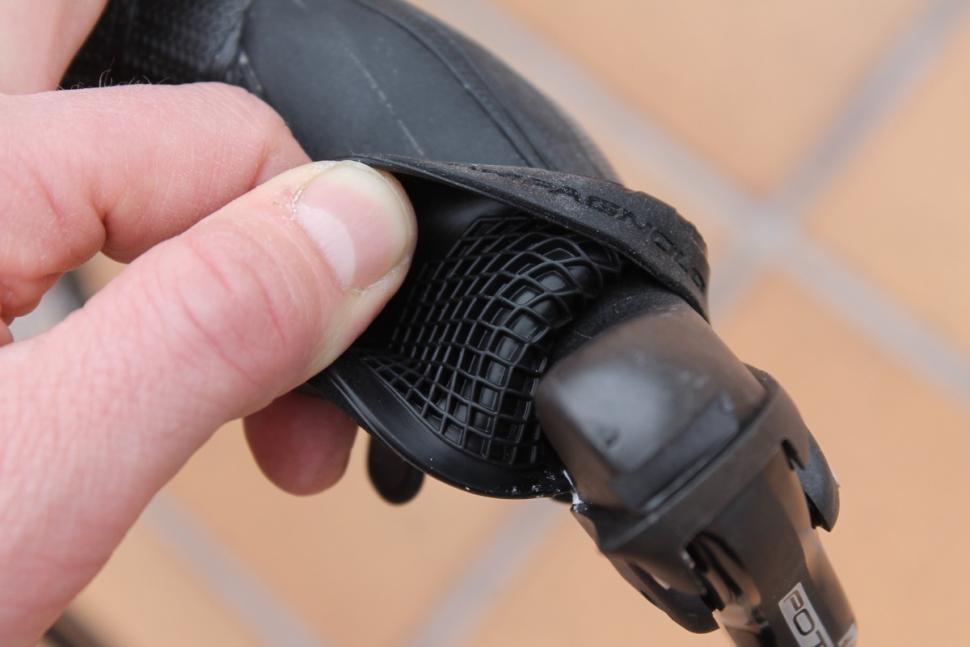 If you fold the hoods back you can see what Campag calls its ‘Varicushion Technology’; this is something you’ll find on existing Campag products, but in a different form. Here, there’s a waffle-like structure to the inner surface that’s designed to add comfort.

Potenza uses Campag’s Power-Shift mechanism, like the existing Athena and Veloce groupsets. This means the long shift lever that sits behind the brake lever allows you to move up the cassette a maximum of three sprockets at a time, depending on how far you push it.

For comparison, with Campag’s existing Ultra-Shift mechanism found on the Super Record, Record and Chorus mechanical groupsets, you can move up the cassette a maximum of five sprockets with one throw of the lever 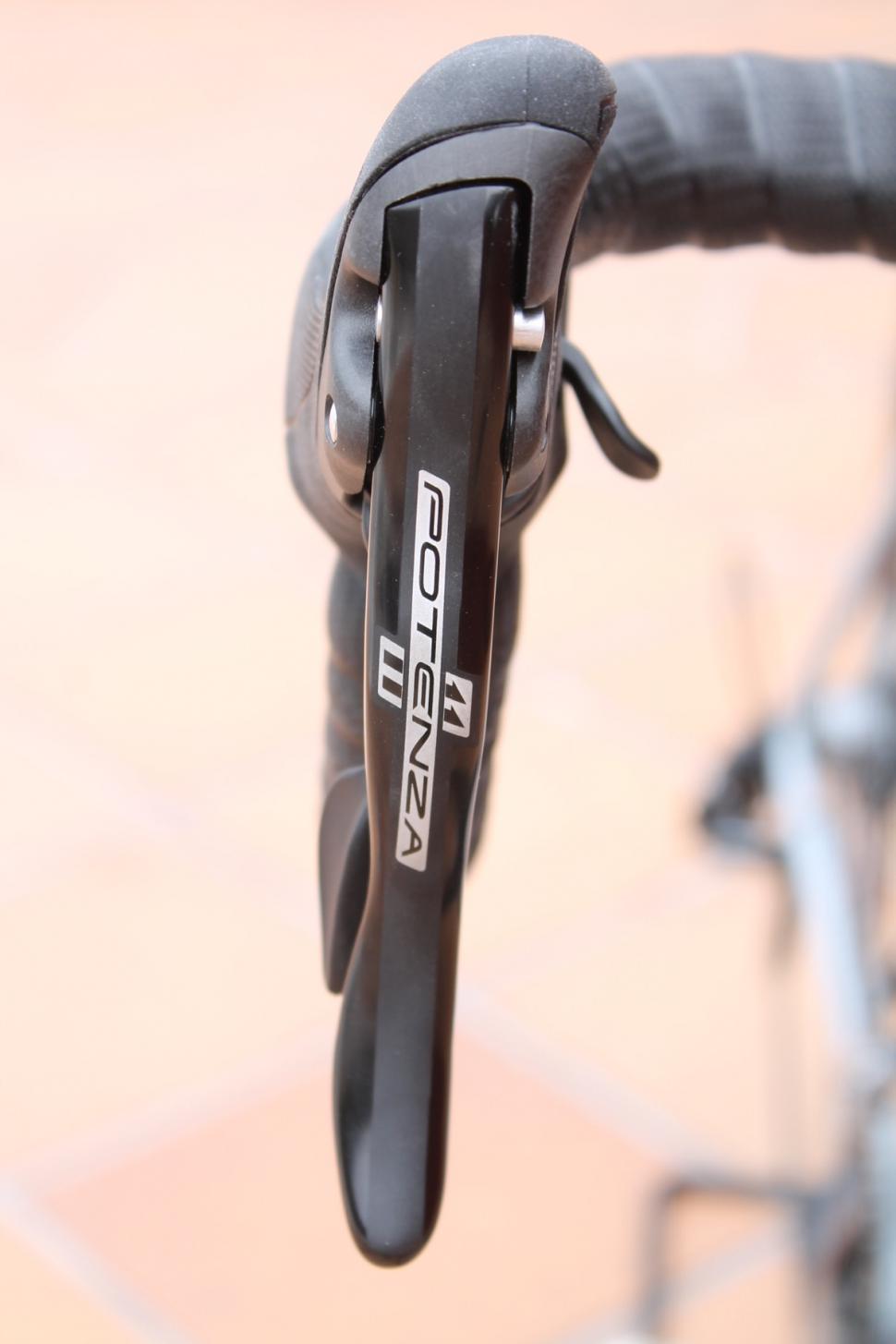 The Potenza thumb lever sits at a much more acute angle to the shifter body – it’s a feature Campag has brought over from its EPS electronic shifters – so it’s not possible to move the cable enough for multiple shifts. The advantage is that the Potenza’s thumb lever is easier to operate, especially from the drops.

Campag says that when you use the thumb lever to move from the larger to the smaller chainring, the chain is initially in the optimal alignment for the smaller sprockets. 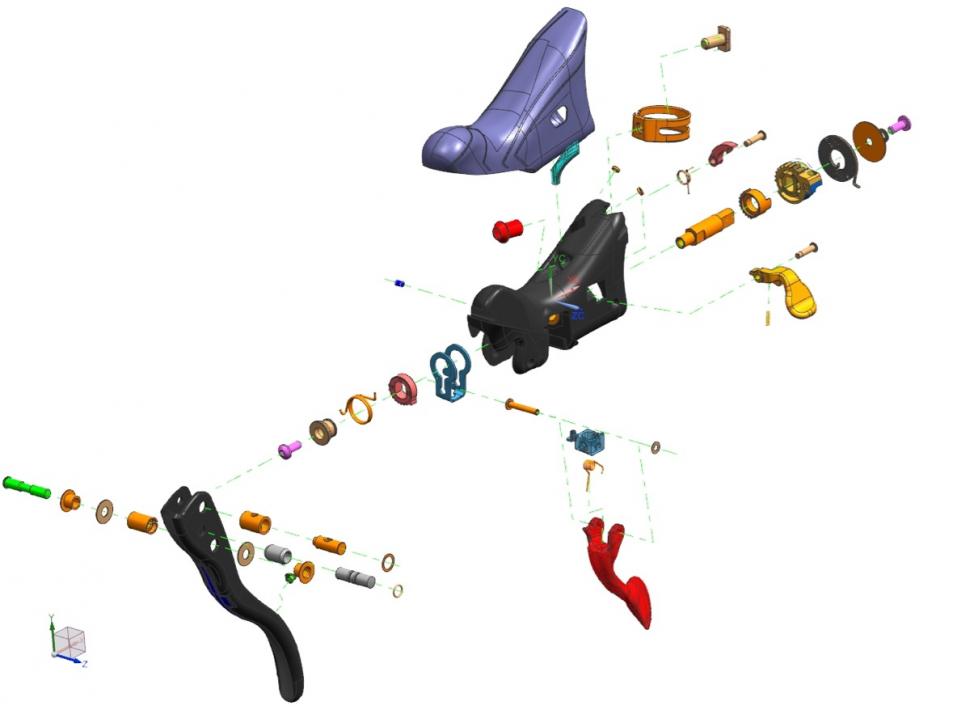 Click the lever a second time and it repositions the front derailleur further inboard for using the larger sprockets. Doing things in this way reduces the chance of throwing the chain off the inner chainring.

A first click of the finger lever will move the front derailleur outboard only slightly so the chain stays on the small chainring, but putting it back into the best position for using the smaller sprockets.

A second and third click of the lever will move the chain up to the big chainring for optimal chain alignment for all sprockets.

It’s much simpler than it sounds! 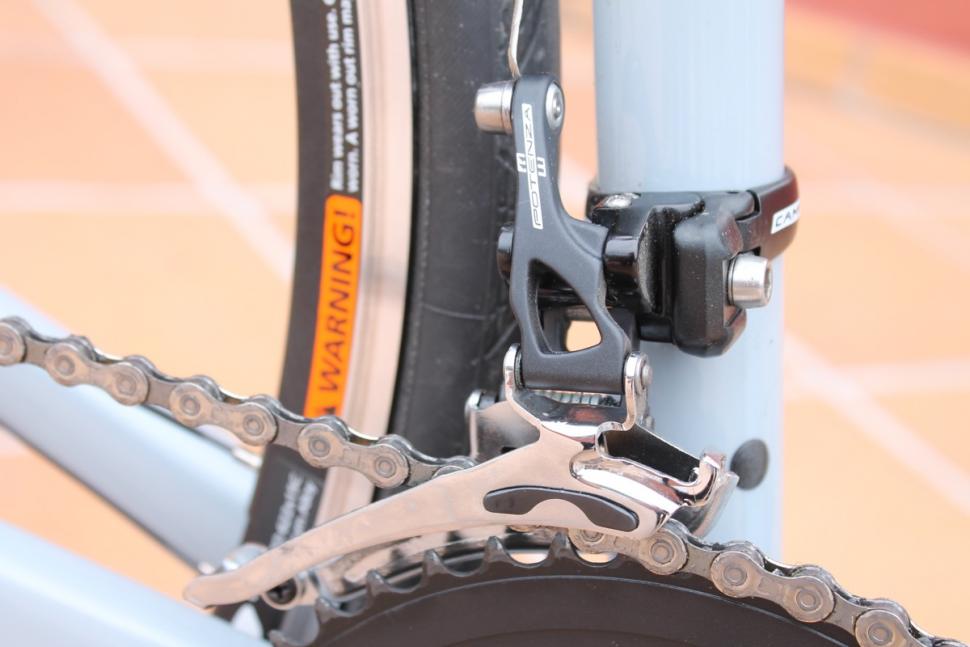 The front derailleur body has a die-cast aluminium body and a one-piece steel cage.

Campag says that technology from its high-end groupsets has inspired the rod design to reduce the range of motion and force necessary for upshifts and to help shifting under load. It claims that upshifts are considerably better than those of other mid-range groupsets and previous generation Campag groups.… naturally! We wouldn’t expect Campag to say anything else.

Campag says that both the design and performance of the Potenza rear derailleur are similar to those of Super Record, Record and Chorus.

The upper and lower bodies are made from reinforced technopolymer while the outer and inner plates are forged aluminium. The jockey wheels run on bushings. The travel limit screws are easy to reach, positioned on the back of the upper body. 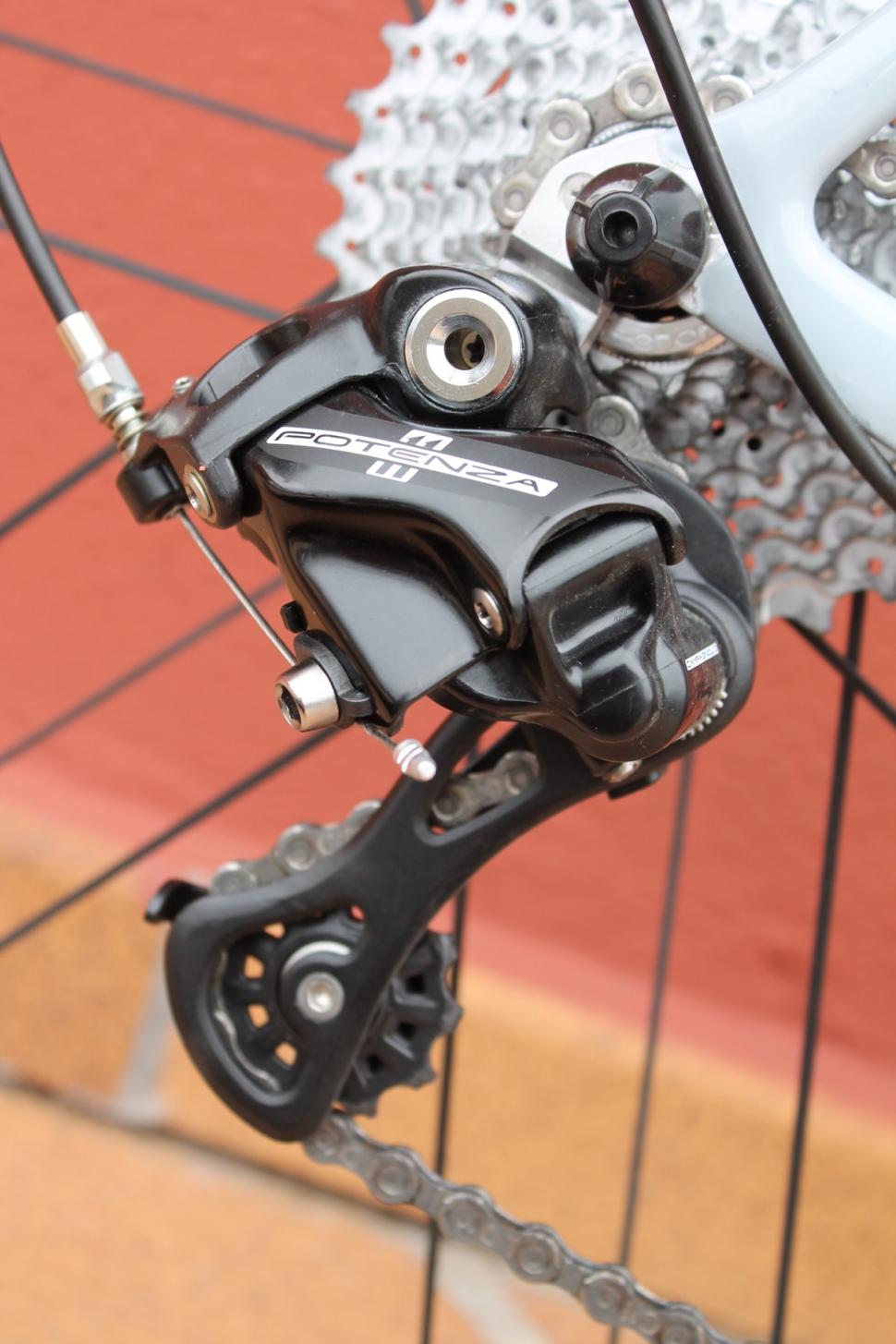 The rear derailleur uses what Campag calls Embrace Technology which already exists in its higher end groupsets. What’s that?

Like Shimano and SRAM, Campag is now offering different sized rear derailleurs in its Potenza groupset. The short cage (55cm) version is for use with standard cassettes (up to 29-tooth) and the medium cage (72.5mm) model can handle Campag’s new 11-32-tooth cassette.

It’s built to Campagnolo’s existing four arm spider design with unequal spacing between those arms. The thought here, as it is with similar designs from Shimano, is to provide rigidity in the areas where shifting takes place under high load while saving weight by not using a fifth arm.

The chainset is available in 53/39, 52/36 and 50/34-tooth options, all of which use exactly the same cranks – the chainrings are interchangeable. 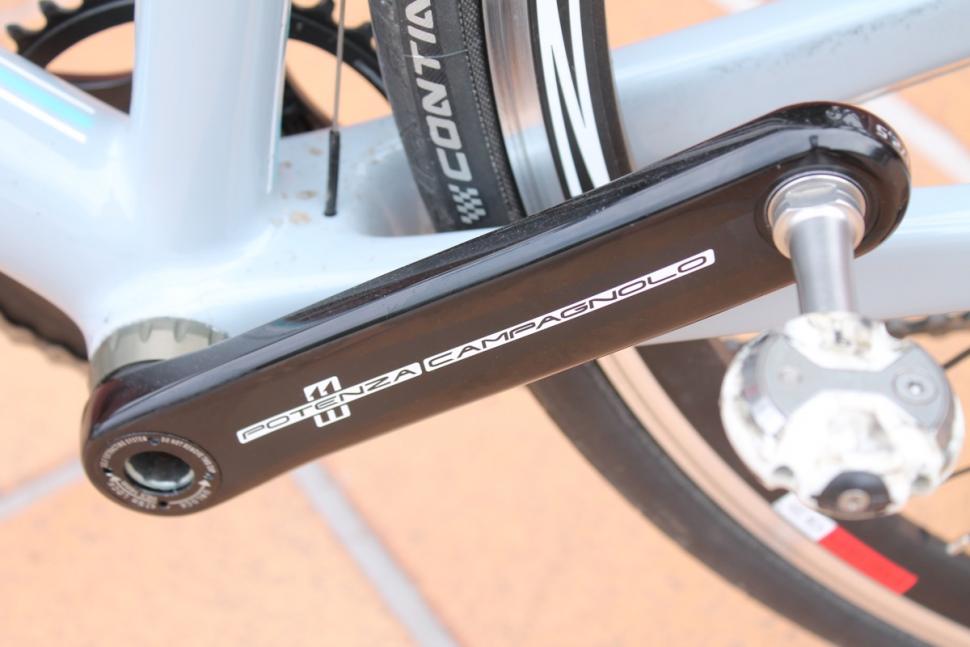 The chainset uses Campag’s Power Torque axle design. This is the same as you’ll find on Athena and Veloce, Campag’s most affordable groupsets. In this system the axle is fixed to the driveside crank, and the non-driveside crank fits to serrations at the other end. 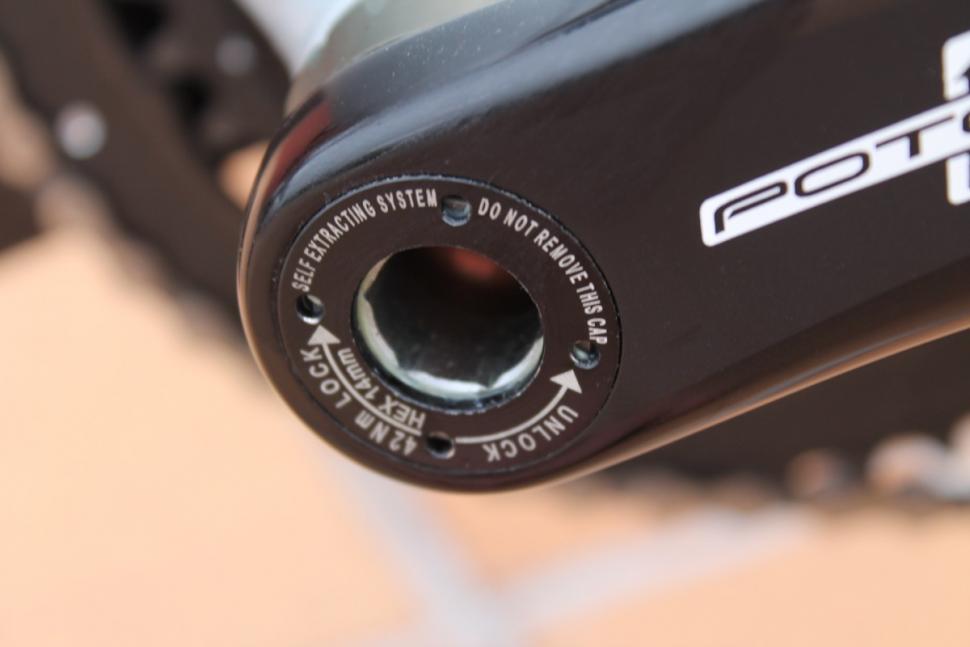 One new feature is that the Potenza design incorporates an internal crank extractor to make maintenance easier.

Campag reckons that aside from the Power Torque axle and the materials used, the Potenza chainset is very similar to Super Record in terms of design and performance.

Weight 321g
The groupset has its own ‘Potenza’ branded dual rim brakes, dual pivot front and rear. They use skeleton arms (they contain holes to save weight) that are a familiar Campagnolo feature. 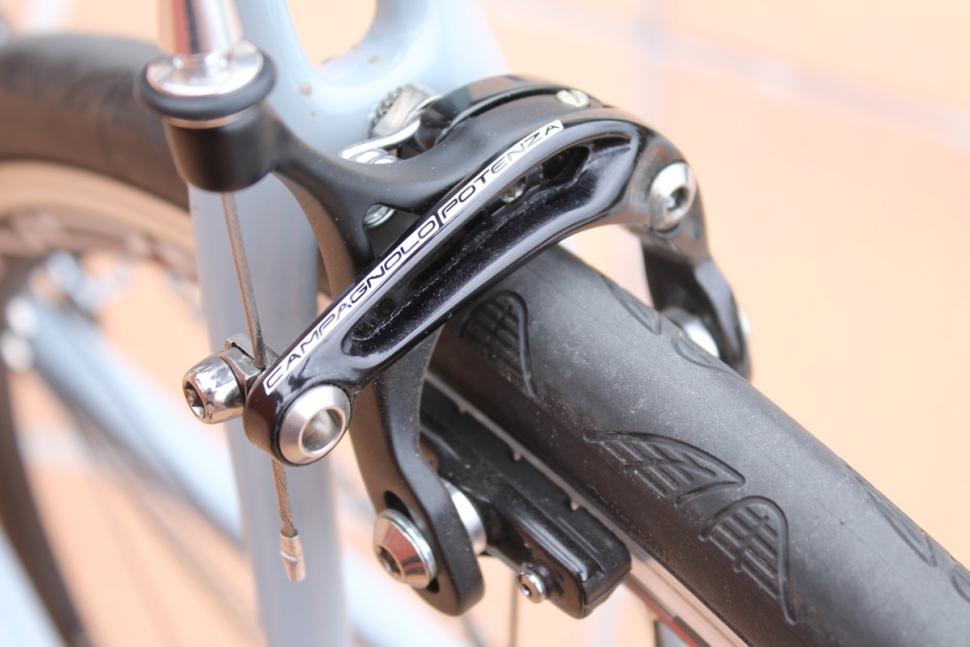 These look very much like Campag’s existing skeleton brakes used for the Athena groupset and they have exactly the same published weight. 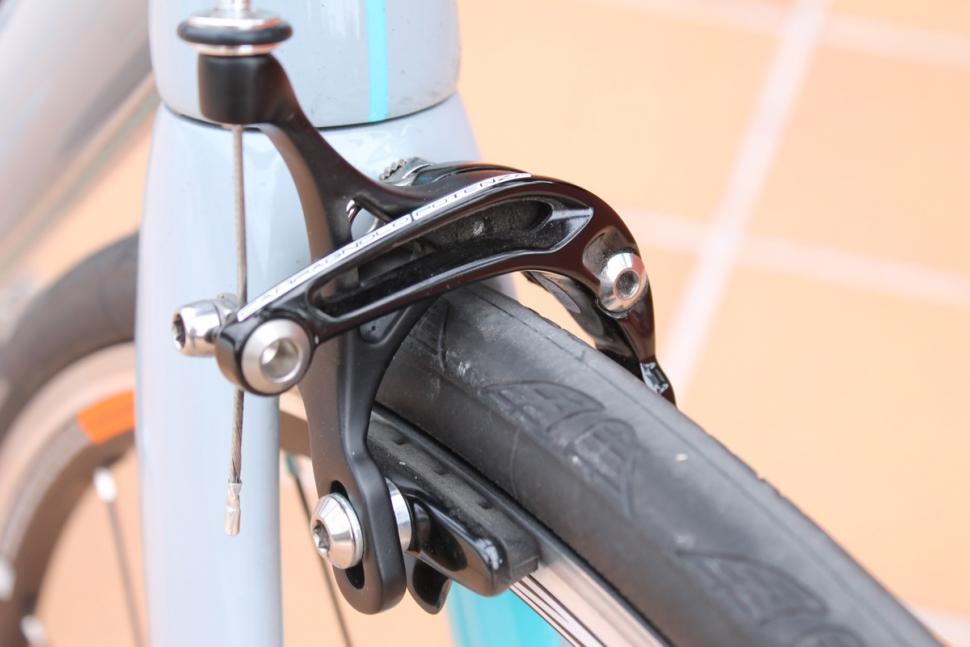 Weight 249g
Campag Potenza marks a new step for Campagnolo in that it offers an 11-32-tooth cassette for lower gearing than has been available up until now. 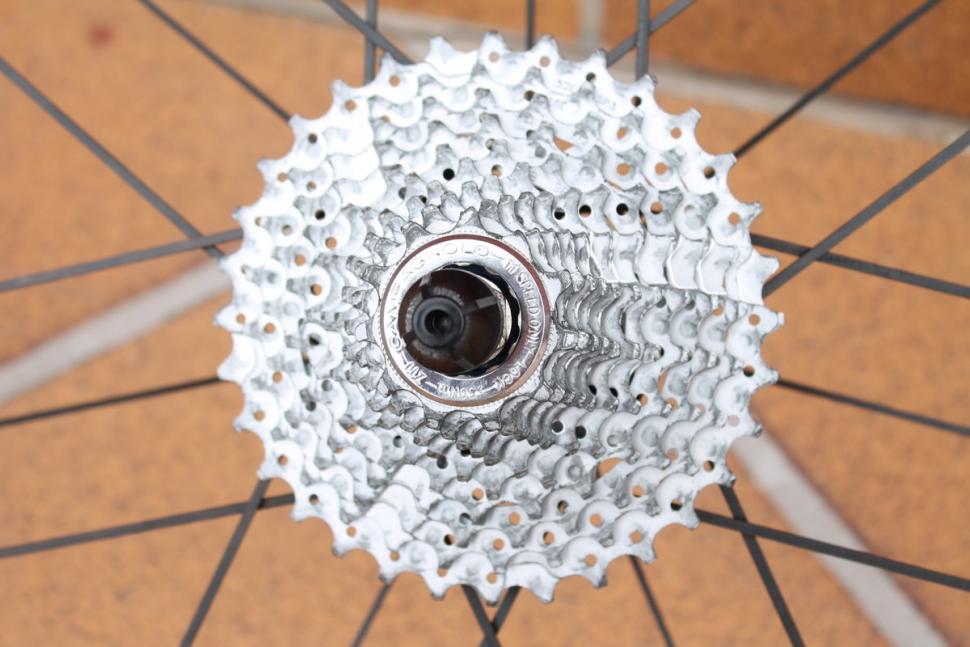 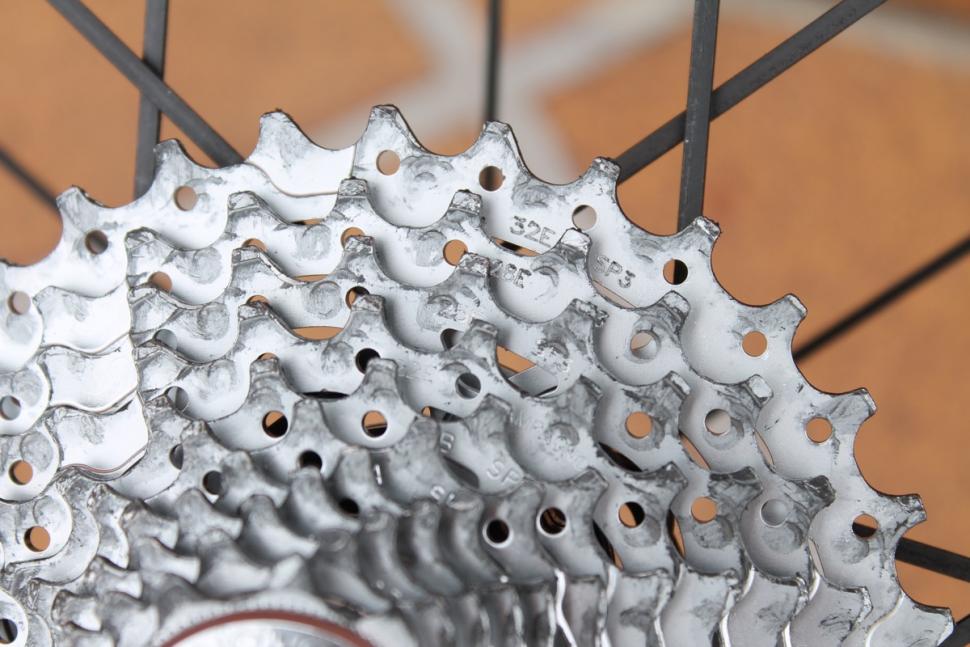 Aside from the 11-32 version, these cassettes are compatible with other Campagnolo 11-speed systems.

Campag’s claimed weight for the complete Potenza groupset is 2,303g. 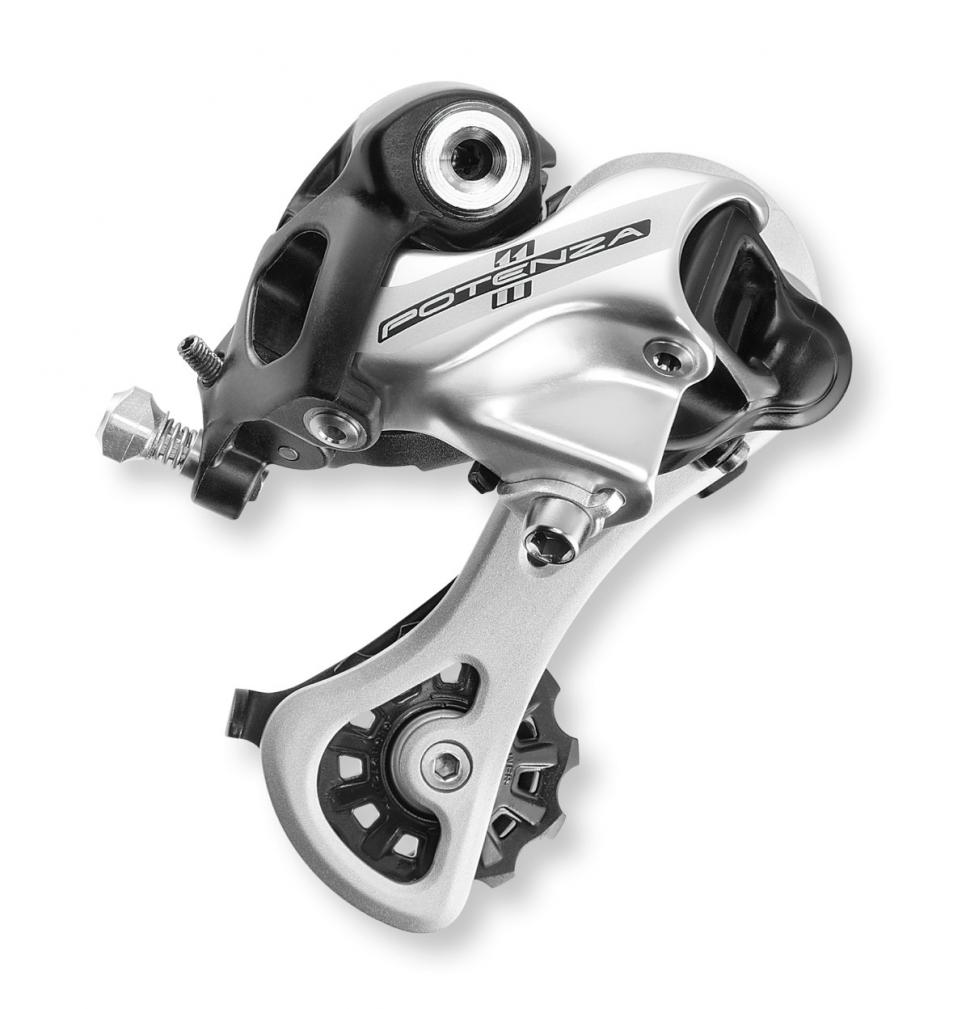 It’s made entirely within the EU, mostly in Campag’s own factory in Romania. It’ll be available in both black and silver finishes, and bar-end shifters will be available for triathlon/time trial bikes, although we didn’t see those. 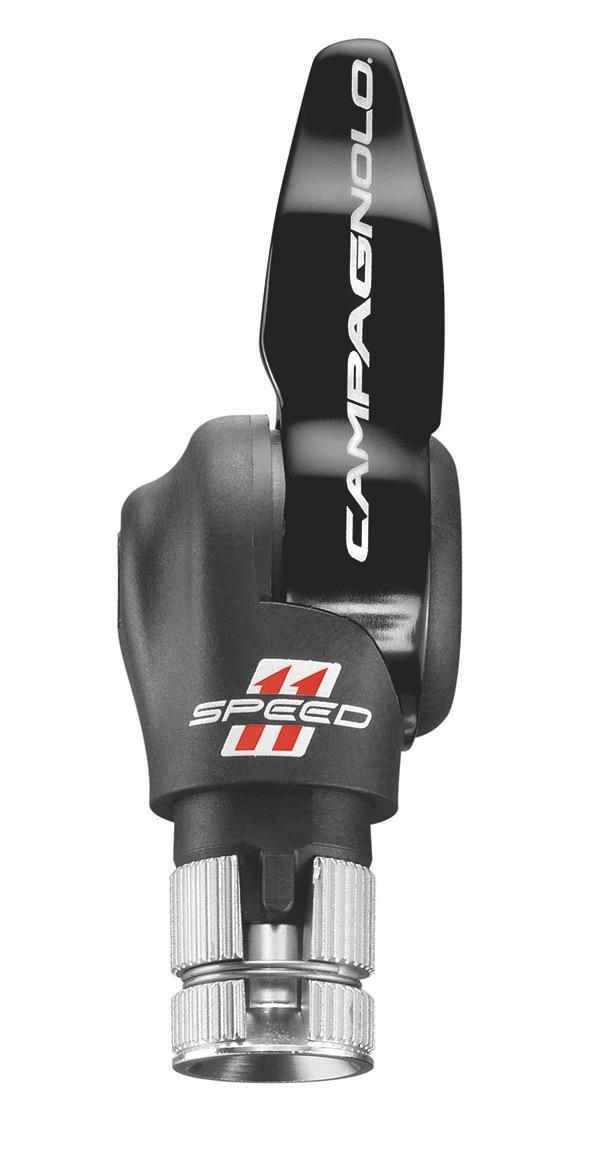 When will it be available? Campag doesn’t have an exact date sorted yet, but it’ll be soon. We’ll give you details when we have them.

I had the chance to use the new Campagnolo Potenza groupset on one dry 2:30hrs ride in Gran Canaria. That’s long enough to get acquainted with a groupset, although obviously not long enough for a full scale review, still less to make any comments on durability. 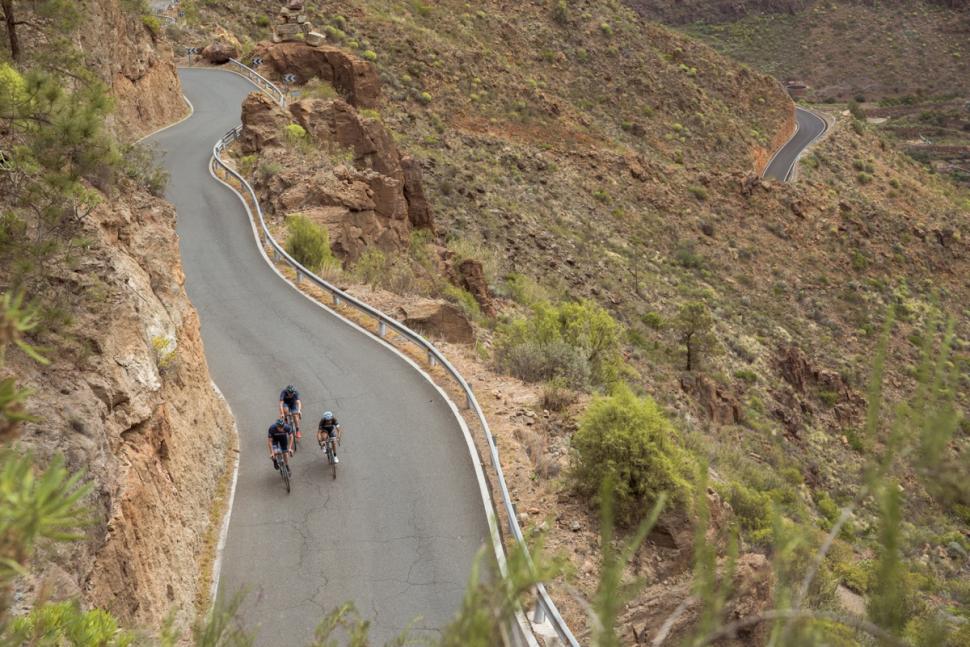 Initial impressions of the Potenza’s performance are very good. It’s a little heavier than Campag’s higher end groupsets – that’s always the way – and it’s arguably not quite as attractive to look at, but you’d be hard-pressed to notice much difference in performance. 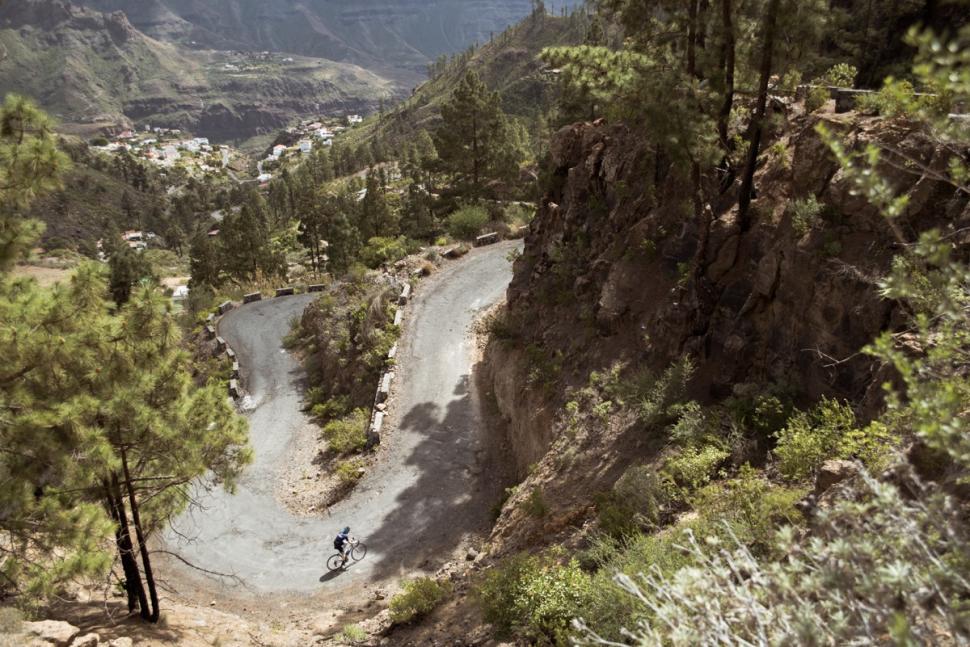 The biggest functional distinction you’re likely to notice is between Potenza’s Power-Shift system and the Ultra-Shift design of the higher level groupsets.

Really, though, that’s not a biggie. In real life you don’t often need to shift five gears at once. Even when you do, pushing the lever more than once is hardly the most onerous task in the world. 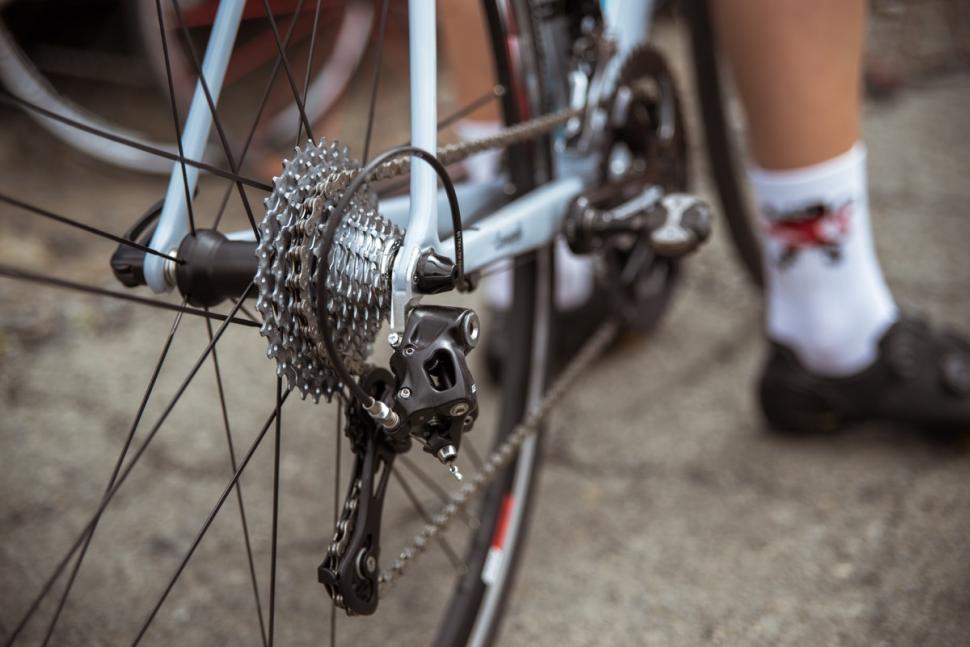 The shifting performance is very good. You notice that most when moving from the small chainring up to the large one. It takes very little effort at the lever and changes are very quick.

I tried to test Potenza’s limits by shifting up to the large chainring under as much load as possible – we had some steep climbs on our ride – and it worked just fine; no hesitation, no labouring, just smooth changes throughout. I don’t think it even noticed!

It’s the same at the rear. The system didn’t mind whether I was going up or down the cassette, seated or standing, it hit the spot quickly every time. That’s all you want.

The 32-tooth sprocket on the cassette is a new one for Campagnolo, and it works exactly as you’d expect. You get a smaller gear than with a 29. That’s it! 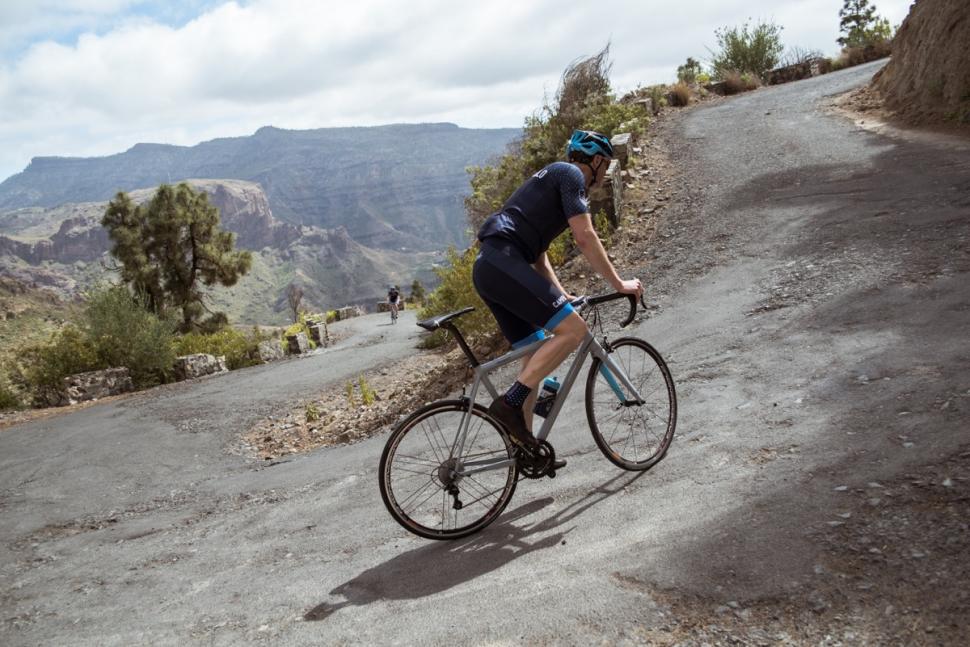 One other feature you’ll notice is the shape of the Ergopower shifters. The tops are far more rounded than on other Campagnolo designs. I think this is a real improvement.

Most often when you’re using the hoods you’ll rest your hands in the depression in the middle but I sometimes like to hold the top section and keep my forearms parallel to the ground. This new shape provides a really comfortable position if you want to do that.

The EPS-style thumb lever, as found on Athena and Veloce, is really good too. I find it much easier to change gear from the drops with this lever compared to the more sticky-out thumb lever on higher end Campag shifters, and I know that many other people find the same thing.

Campag knows this – that’s why it uses this design on EPS – it just can’t offer you multiple shifts down the cassette of a mechanical system with a lever of this kind.

It’s hard to judge the chainset stiffness on an unfamiliar bike but it felt solid enough to me, and the brakes worked very well indeed. We had completely dry conditions so I didn’t get the chance to try our wet weather braking, but the bite and the power felt good on our long and meandering descents.

At this point, I’ve got nothing negative to say about Campagnolo Potenza. It performed beautifully on my test ride. The caveat is that it was a single outing, but early impressions are that Campag is on to a winner here.