New world champion Lizzie Armitstead has been presented with a new Specialized Amira with custom graphics that she’ll ride throughout the 2016 season. 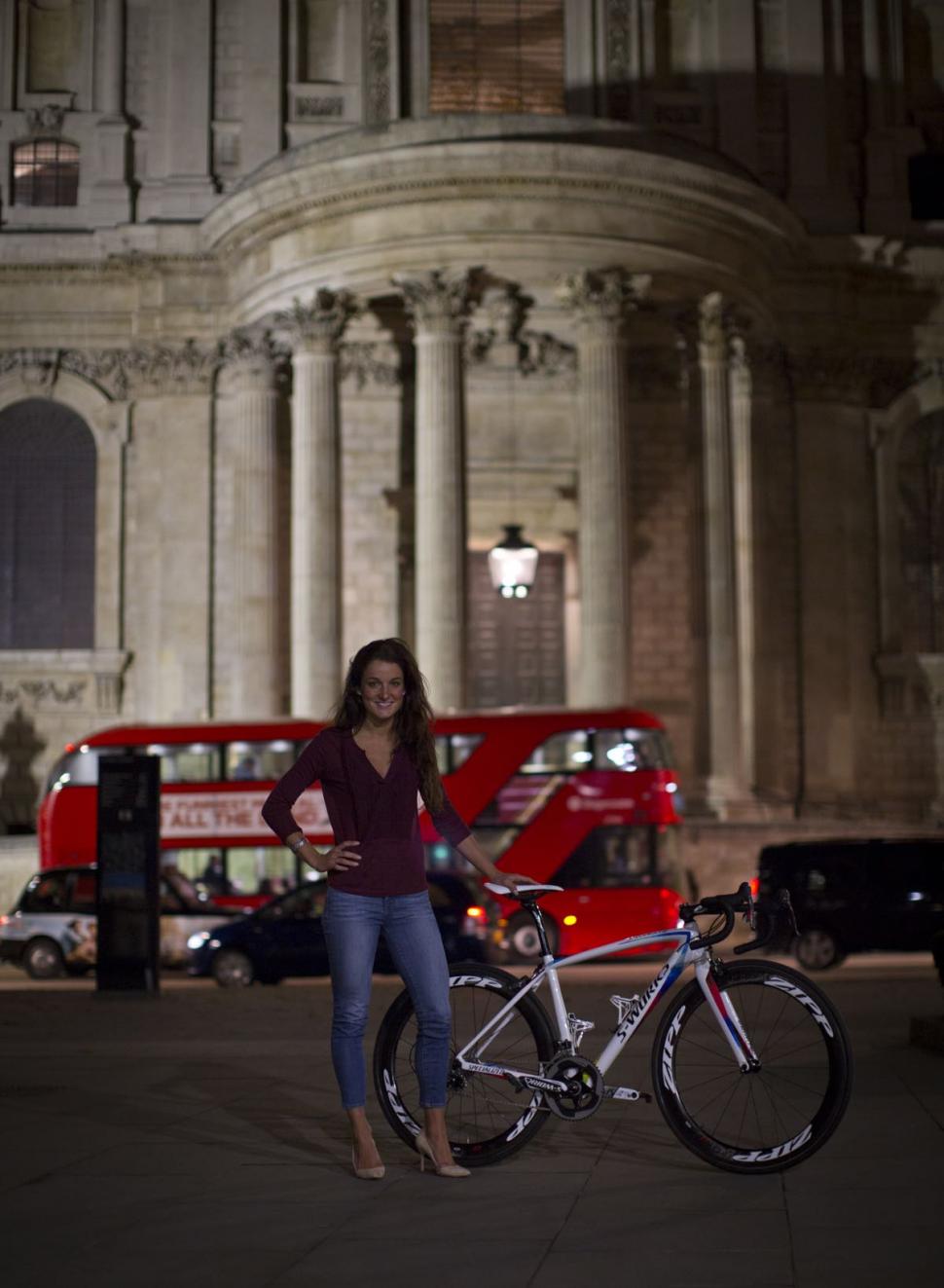 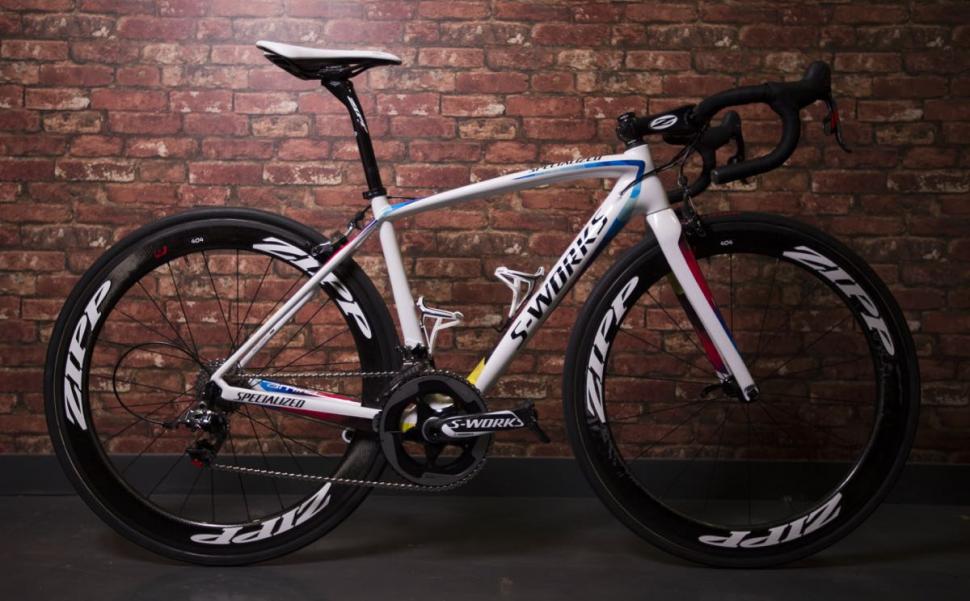 The frame’s finish incorporates a fine rainbow flake in the paint to tie in with the world champion’s rainbow stripes. 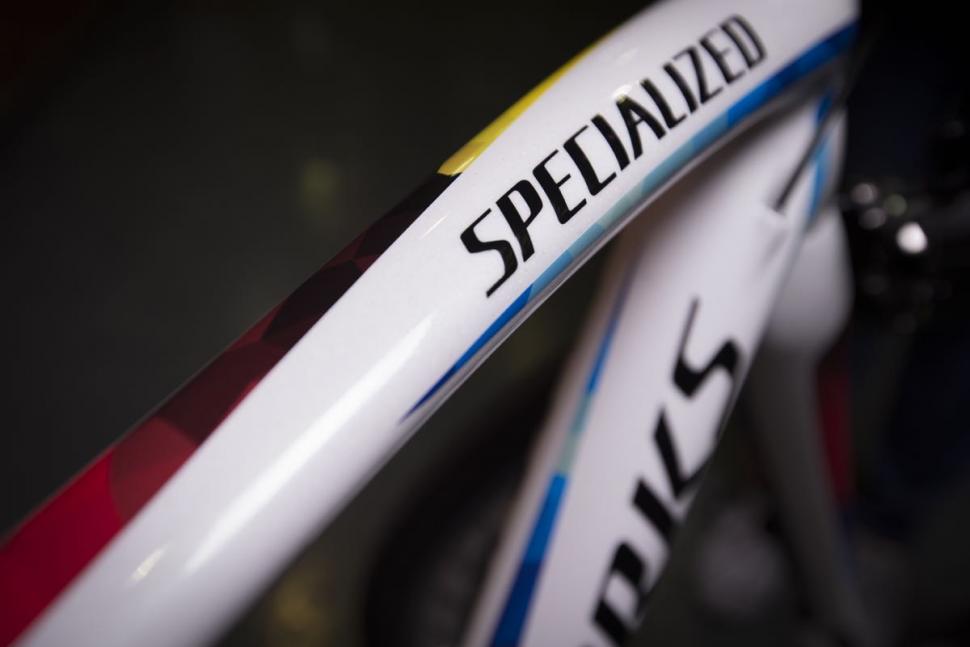 “Triangles are very symbolic, they have many meanings. In this case Lizzie’s represent the unifying power of working together in solidarity utilizing our strongest attributes. I also intend the graphic to convey progression, direction, and purpose during the process of growth and reaching an ultimate peak of transformation in the attainment of her dreams. The colours represent the trials of the race and of course the World Champion win.” 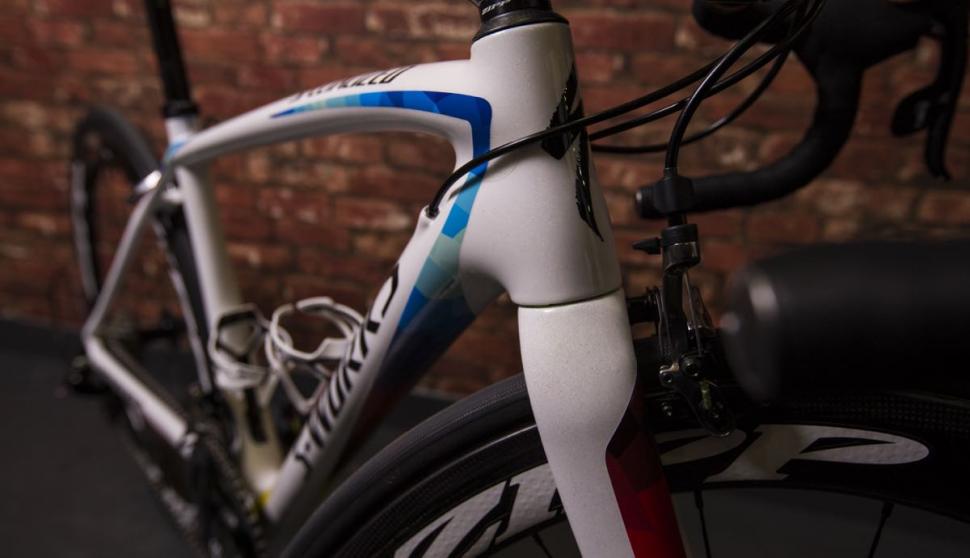 Wow! That’s a lot to meaning to get across in a paint job. 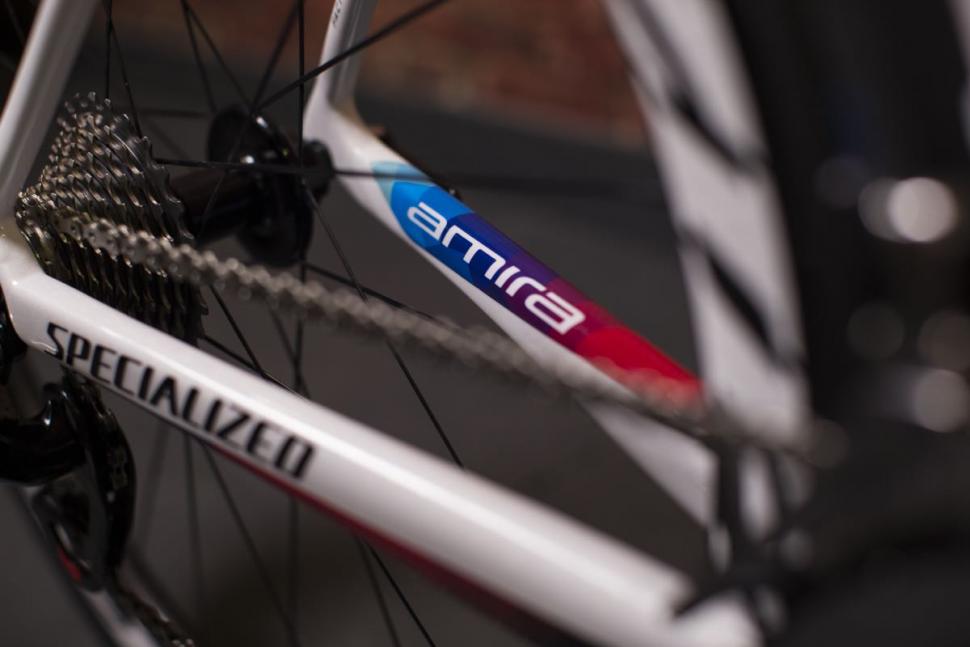 “At first glance I love the simplicity of it,” said Lizzie. “When I actually look further into it I see the glitter on white. Pearl effect, I love it. It’s exactly how I wanted my bike to be, simple and elegant. ” 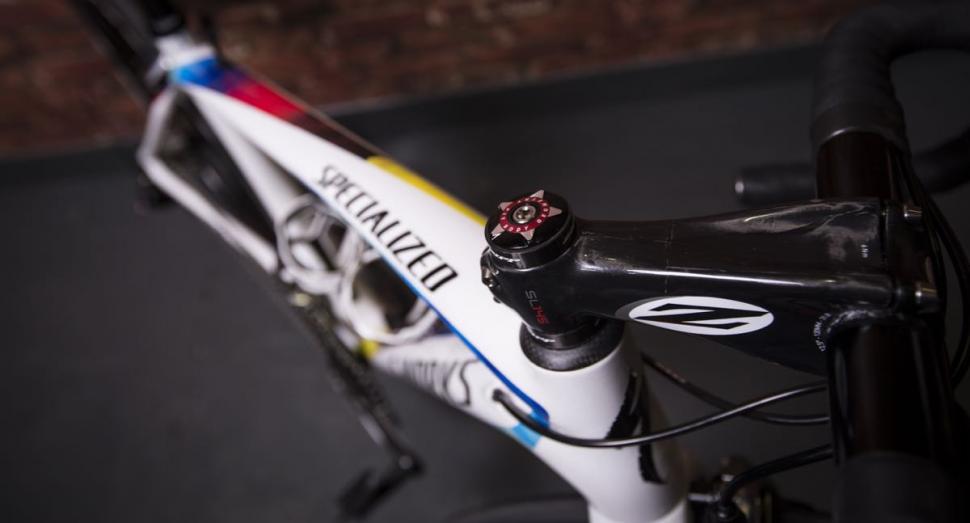 The Amira race bike is made from Specialized’s FACT carbon-fibre and comes with a tapered head tube: 1 1/8in at the top increasing to 1 3/8in at the crown, the idea being to increase the front end stiffness for accurate steering. The bike is built up with a SRAM Red groupset – the cable version rather than the yet to be released eTap wireless design that was used by the AG2R La Mondiale pro team during the 2015 race season. 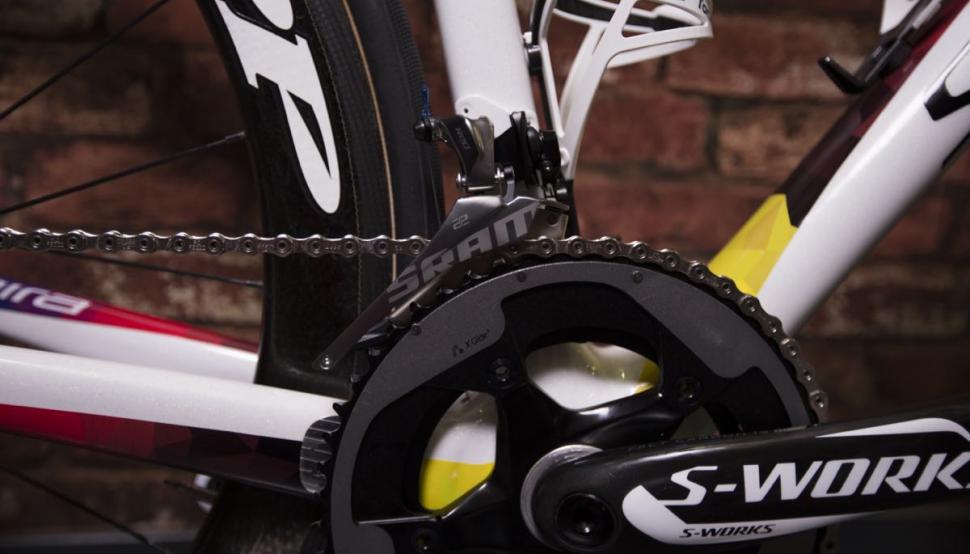 The chainset is Specialized S-Works with hollow carbon-fibre crank arms, an oversized alloy axle, and fitted with SRAM Red chainrings. 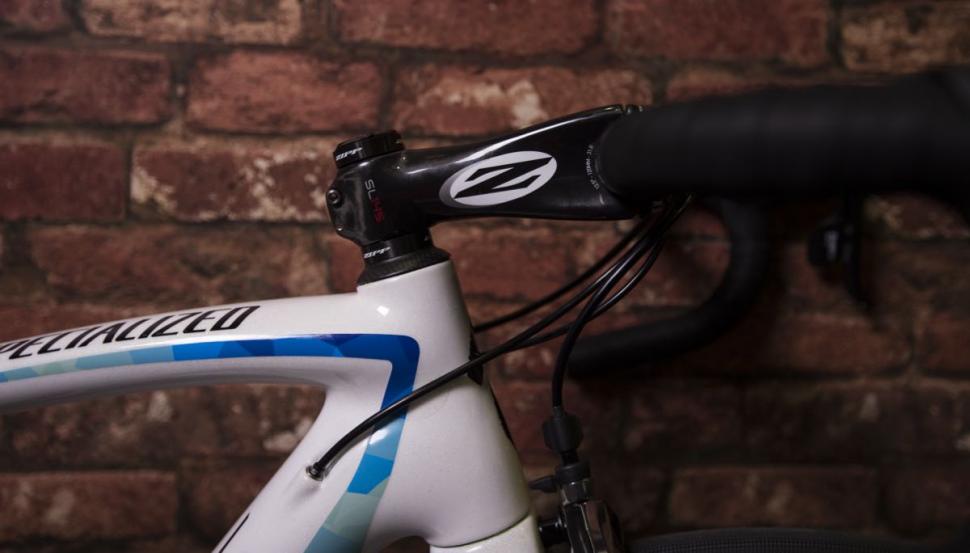 The stem is from Zipp, a brand owned by SRAM. It’s actually an SL145 stem made from carbon-fibre with titanium bolts, although it hasn’t been in the Zipp lineup for a couple of years now. 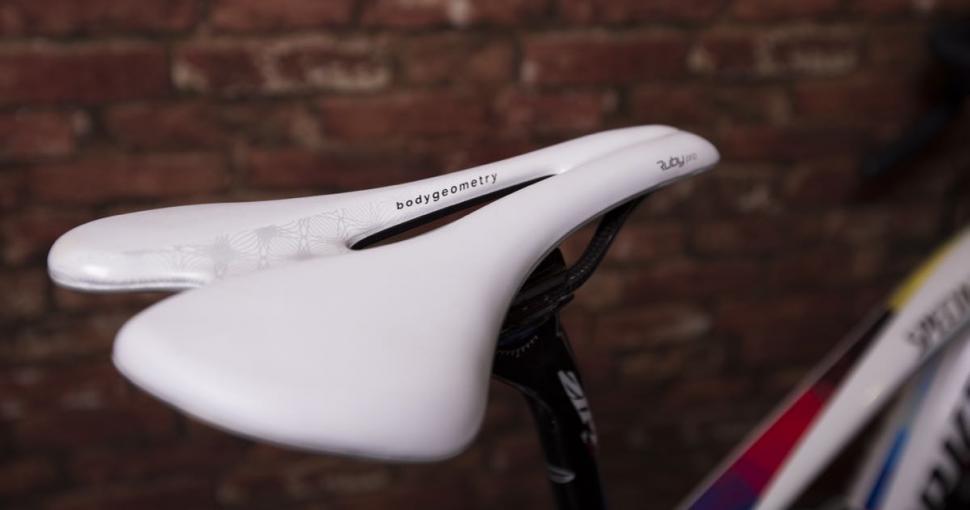 The handlebar is from Zipp too, and so is the seatpost; that’s an SL Speed on there with 20mm of setback (the position of the clamp in relation to the post). The saddle that sits on top is a Specialized Ruby Pro with carbon rails and a carbon-reinforced shell.

The wheels are Zipp 404 Firecrests, the brand’s popular 58mm-deep all-rounders, while the tyres are from Specialized. 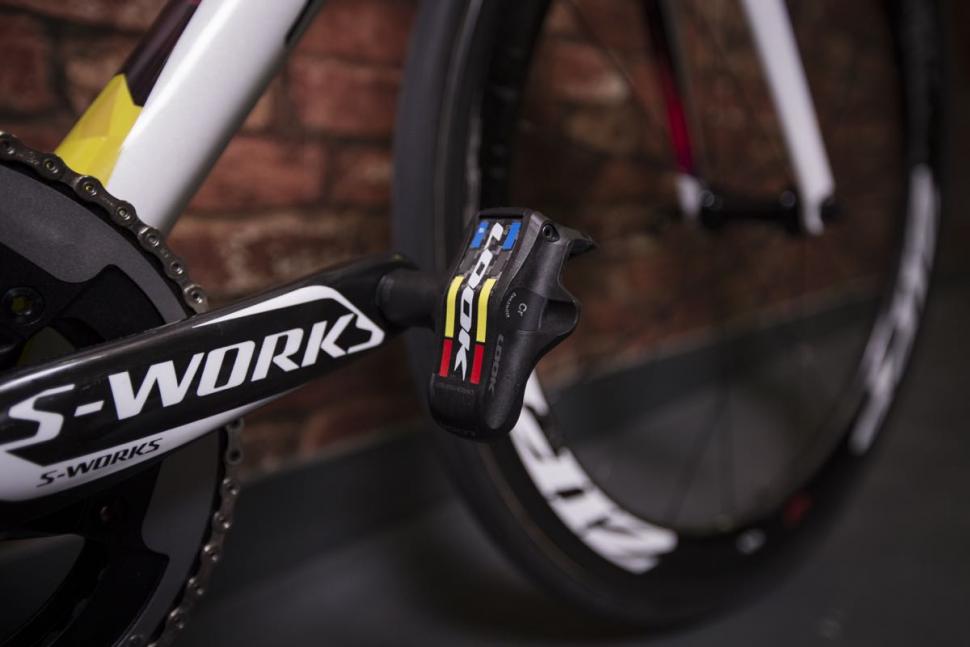 The pedals are Look Keo Blade 2 – the version with cromo axles rather than the more expensive titanium version – and those are 21g Deva bottle cages from Tacx.