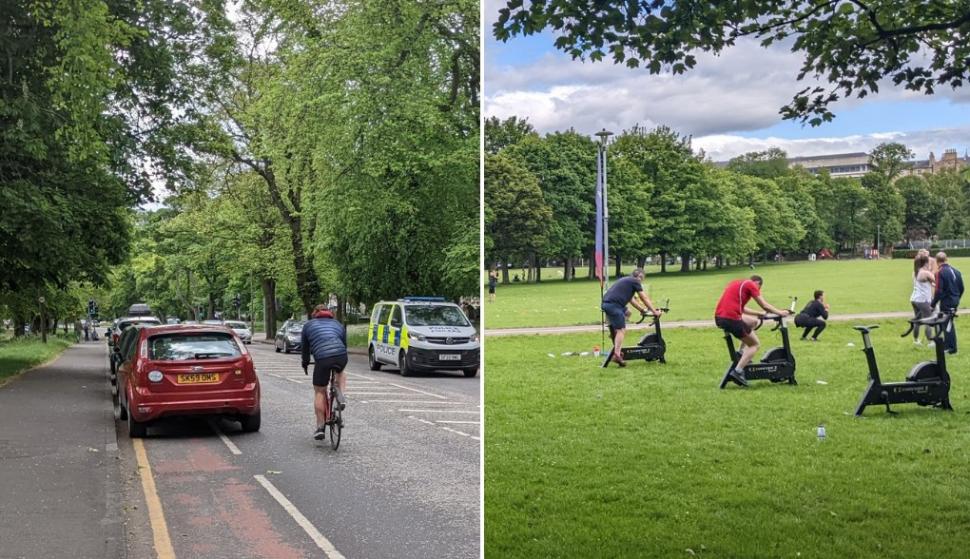 Static cyclists in The Meadows (via Dave McCraw on Twtiter)

A ​cycle lane on a road through a park in Edinburgh is regularly being blocked by drivers parking there – with the vehicles’ owners then getting out and riding static bikes as part of open-air fitness classes they are attending, claims the person who took the above photographs.

Twitter user Dave McCraw, who says the issue highlights the lack of safe cycling provision in the city, posted pictures of cars parked in the cycle lane plus a fitness class with participants pedalling on static bikes.

“Something that doesn't help is making it legal to park over cycle lanes to do stationary bike riding in the park.”

Something that doesn't help is making it legal to park over cycle lanes to do stationary bike riding in the park.

Others found the whole spectacle rather bizarre.

They drive to the park, park in the cycle lane, then use the exercise bikes? That is so stupid it's hilarious. 🤣😡😢

Situated in Marchmont in the south of the Scottish capital, Melville Drive runs along the southern edge of The Meadows and the northern side of Bruntsfield Links.

Fitness instructors operating in Edinburgh’s parks and other greenspaces are required to have permission from the council to hold classes there.

City of Edinburgh Council – now controlled by a minority Labour administration with the support of the Conservatives and Liberal Democrats – says that registration is required to enable it to better manage such facilities.

Cycle lanes are covered by Rule 140 of the Highway Code, which governs the use of so-called “mandator” cycle lanes, separated from the main carriageway by a solid white lane, and “advisory” cycle lanes, which have a broken white line.

Local restrictions on parking and waiting also apply – in this case a single yellow line, with Mr McCraw pointing out in a response to a comment on his original post that the issue was not so much people parking where they are allowed to, but rather that it highlights the inadequacy of much of the cycling infrastructure in the city.

No, I'm moaning that we've built cycle lanes that people can park on.

What’s the point in a cycle lane that the very vehicles they aim to separate cycles from can (legally) make completely redundant?