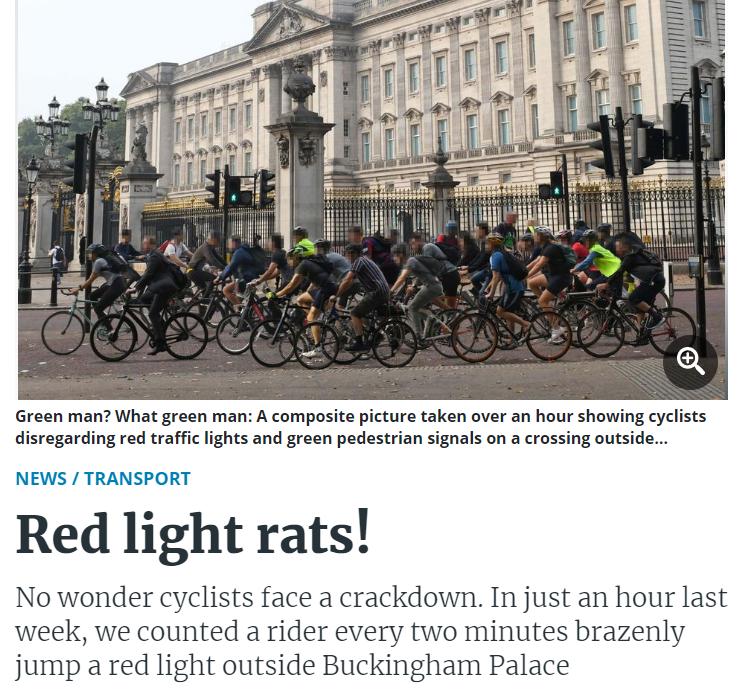 The paper claimed that, in one hour, 26 “rogue cyclists” jumped a red light outside Buckingham Palace – despite the road being closed to motor traffic and police officers urging riders to continue through lights
by Ryan Mallon

At the end of a week dominated by Grant Shapps’ pledge to introduce tougher rules for cyclists, including speed limit restrictions and possible number plates for bike riders (before the Transport Secretary swiftly backtracked on the latter proposal), the Mail on Sunday has been criticised for publishing an article which claimed that 26 “rogue cyclists” jumped a red light outside Buckingham Palace in one 60 minute spell last week, prompting the paper to conclude: “No wonder cyclists face a crackdown”.

The article, published today under the headline “Red light rats”, has been described by cycling commentators as “dehumanising”, “irresponsible” and “dangerous”, with one cyclist arguing that the Mail’s latest attempt to “stoke hatred” will “get people killed”.

The report has also been dismissed as “manufactured” by cyclists on Twitter, who pointed out that the Mall was closed to motor traffic due to road works at the time of the Mail’s survey and claimed that police officers were actively encouraging cyclists to ignore the red lights when it was safe to do so.

But Sam here decided to manufacture a story complete with dehumanising language and edited photos. https://t.co/JTgz6mIDkQ

However, according to the Mail’s article, which neglects to mention the road closures, “rogue cyclists flagrantly put pedestrians as they jumped a red light in front of Buckingham Palace almost every two minutes.”

The article claims that between 7am and 8am on Wednesday “26 cyclists ignored the traffic signal and ploughed on with blatant disregard for people crossing”, with a further 22 allegedly following suit during the subsequent hour.

The Mail also featured a composite photo of the 26 ‘red light jumping’ cyclists, which one Twitter user described as “fabricated” and “deliberately misleading”.

> Grant Shapps: Cyclists should have number plates, be insured and subject to speed limits

“Many of the cyclists were not wearing helmets as they tore along the busy road,” the article continued, before linking the questionable survey – undertaken, coincidentally, on the same day the Mail splashed “Cyclists may need number plates” on its front page – to Shapps’ latest attempt to win support from the pro-motoring lobby by calling for a review of how cycling offences are enforced.

Some sections of the UK media don't need much encouragement to go after cycling, and Grant Shapps' comments about cycle licensing have given them permission to do yet more awful articles like this one. It's divisive, it's dangerous, and it's really, really depressing.

“In the last 24 hours I’ve seen a few cyclists jump reds. I’ve seen some drivers do it. I even saw one driver go 50 yards the wrong way down a two-lane one-way street to nip into a side road.

“Some sections of the UK media don’t need much encouragement to go after cycling, and Grant Shapps’ comments about cycle licensing have given them permission to do yet more awful articles like this one. It’s divisive, it’s dangerous, and it’s really, really depressing.”

> "There is no war on cars. There is a war on bikes": Cyclists react to Grant Shapps' "hugely damaging" number plates and speed limits pledge

One Twitter user pointed out that the road outside Buckingham Palace was closed to motor vehicles on Wednesday morning as part of ongoing restrictions due to road works near Admiralty Arch.

To add some context. The road outside BP was closed to motor vehicles last week but the traffic lights were still operating. It was a case of why bother waiting at a red light when it's safe to proceed as there's no traffic & the pedestrians have crossed safely

“The traffic lights were still operating. It was a case of why bother waiting at a red light when it’s safe to proceed as there’s no traffic and the pedestrians have crossed safely,” Merv Charles claimed.

Another user, Greg Collins, verified Charles’ claim and added that a police officer told him to continue through a red light when he was stopped outside Buckingham Palace last weekend.

Cyclist Elisabeth Anderson tweeted that, despite the rather important context concerning the road closures, the Mail “decided to manufacture a story complete with dehumanising language and edited photos”.

“Calling cyclists ‘rats’ and stoking hatred will get people killed,” she said. “This isn’t journalism, it’s hatred and it makes me feel physically sick.”

The Mail’s latest attempt to mislead its readers in a story about cyclists follows Wednesday’s sensationalist front-page splash detailing how riders may be required to carry number plates as part of a road safety review proposed by Transport Secretary Shapps.

However, in an article published by the Times on the same day, Shapps claimed that he “was not attracted to the bureaucracy of registration plates. That would go too far”.

While Shapps’ two statements to the Mail and the Times appeared to contradict each other, the Department for Transport’s press office later admitted to road.cc that the piece in the Times was “the more accurate reflection of the Transport Secretary's view”.

On Friday, Shapps himself clarified matters, emphasising to Nick Ferrari on LBC that there are “no plans to introduce registration plates”.

“The wider point that I was making, though, is that it’s got to be right to ensure that everybody who uses our roads does so responsibly,” he continued.

“What I was actually talking about at the time was cyclists who perhaps bust through red lights, we see that an awful lot.

"So this is not a plan which is – as I think has been suggested – somehow going after cyclists.”