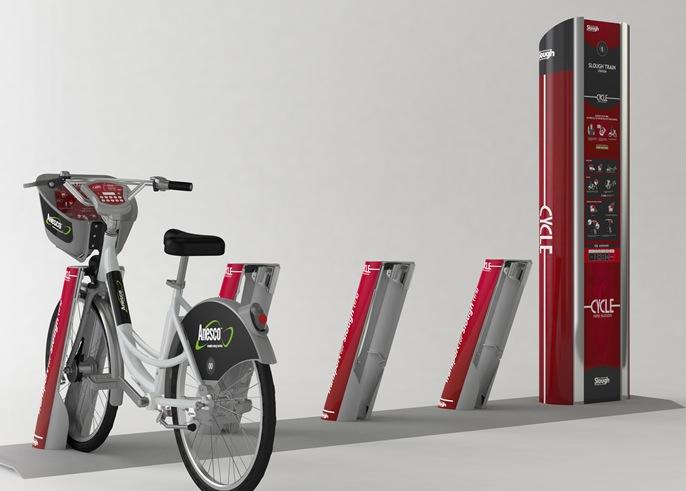 The Berkshire town of Slough, much maligned in TV shows such as The Office with boss-from-hell David Brent, may have become just a little bit more “fit for humans now” (apologies to Sir John Betjeman) with yesterday's launch of its very own cycle hire scheme.

It’s the latest town to seek to replicate London’s Cycle Hire Scheme, although it has to be said not all such initiatives have met with success – Nottingham and Dumfries are among places that seen very low levels of uptake after such schemes were launched there.

Slough’s scheme, however, is mainly focused on meeting a specific need – enabling workers at businesses operating from the town’s trading estate to easily get to and from their places of employment from local railway stations.

Savio DeCruz, from Slough Borough Council’s transport team, said: “The bikes are designed to help commuters from either of the stations get to the middle of trading estate without the need to wait for a coach or bus, or fork out for a taxi.

"However, anyone who is registered can use them even if they just want to have a cycle along the canal towpath or visit a local park."

Councillor Sohail Munawar, commissioner for economic and social inclusion, added: “Slough is an excellent place to cycle – it’s relatively flat and has an excellent network of cycle routes and pathways through some of our best parks.

“I can’t wait for the launch of the scheme and I am looking forward to giving the bikes a try!”

Cycle Hire Slough, which in its first phase sees three hire stations installed at Slough and Burnham railway stations as well as Slough Trading Estate, with 60 bikes available, has been created by Slough Borough Council and The Climate Change Sub-Group of the Local Strategic Partnership.

To access the scheme – which is only open to people aged 16 and over – you need to pre-register, with one year’s access fee set at £10. Bikes then cost £1 for the first hour, and 50p for each half hour thereafter up to a maximum of 24 hours.

At that point, a £150 late return penalty kicks in. A damaged or non-returned bike will incur a charge of up to £600. Charges for usage will be debited from the scheme member’s bank account monthly.

According to Cycle Hire Slough, features of the bikes, more advanced than those of initiatives such as London’s Barclays Cycle Hire Scheme, include:

The on board computer is the brains of the bike, it will process user access faster to the scheme and provide users with trip information and duration of ride. The computer will warn users if they are approaching the maximum rental duration

Operating in the same way as a vehicle steering lock, the fork lock and handlebar lock allows users to lock the bike away from the docking point during the hire period

For greater reliability and performance.

There are also the usual features common to bikes belonging to similar schemes such as lights, adjustable seatpost, and a three-speed shifter on the handlebars, plus a closed basked that can take loads up to 10kg.

Dumfries, the first place in Scotland to launch its own cycle hire scheme back in 2010, averaged just 20 hires a week in its first two years of operation at an average cost per rental of £100, according to the BBC.

In Nottingham, which has a population more than 15 times larger than the Scottish town, on average there was less than one hire of a bike per day in the first six months of its cycle hire scheme being launched last year, blamed by the council on the fact it started operating in September so the period covered autumn and winter.

Undeterred by the experience of those places, other towns and cities – Liverpool, Birmingham and, most recently, York among them – are pressing on with their own plans.

Full details of Cycle Hire Slough can be found on its website.