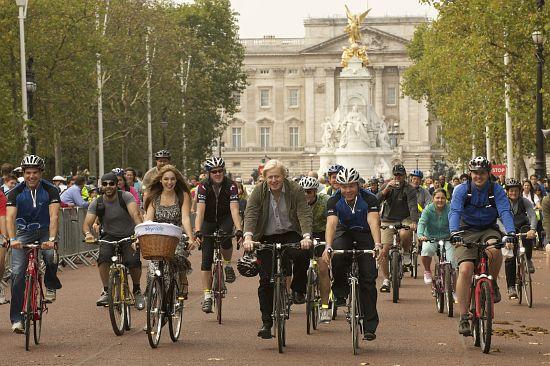 The climax of Sky's summer of cycling is the biggest of the lot...
by Kevin Emery

More than 65,000 people joined Mayor Boris Johnson and stars from the worlds of cycing and TV for the Mayor of London’s Skyride yesterday. The capital's roads were clear of vehicles for the biggest mass participation cycling event ever held in London, which was organised by The Mayor, Sky and British Cycling.

The day marked the fifth and final event in Sky's series of mass participation cycling Skyrides that have taken place throughout the UK this summer, in Manchester, Hounslow, Glasgow and Leicester.

Boris Johnson, Mayor of London, said: "With over 65,000 Londoners of all ages, sizes, shapes, and cycling ability taking part, today has been what we think is the largest bike ride of its kind ever to be held in London. It is a fitting conclusion to a fantastic summer of cycling, in which more and more people have discovered that ours is a fantastic city in which to go by two wheels.

"This is of course just part of our work to boost cycling. We are investing record amounts, and over the coming months Londoners will be hearing more about our plans to make London one of the most cycle friendly cities in the world."

Sir Chris Hoy said: "This was my second year at the London event and it's clear that we have topped last year's fantastic celebration of cycling. It was great to see so many people out on their bikes enjoying the opportunity to be on traffic free roads.

“Cycling is such an easy way to stay fit and healthy, because your bike can be taken with you wherever you go. The best part of these events is that it doesn't matter if you're a novice or a more experienced rider, they have something for all ages and abilities. I'm hoping that everyone that took part today will continue to stay on their bikes and enjoy all the fun and benefits it can bring."

The route took in iconic landmarks including Buckingham Palace, St Paul's Cathedral and The Tower of London and also incorporated St James's Park and the river views of The Embankment. And as well as having the opportunity to see the capital in a whole new light, participants were able to take part in a number of activities organised by Sky.

Riders could join a fancy dress cycling parade after having their bikes customised by artists in the Skyride Style Zone, watch Professional BMX riders performing tricks in the Skyride Street Zone, and pick up tips on health and wellbeing from British Cycling in the Skyride Active Zone.

Jeremy Darroch, Chief Executive of Sky, added: "It's only fitting that the culmination of what has been a great Skyride summer is held in our capital city. Working in partnership with British Cycling and local councils, the Skyride team has got people back on their bikes and cycling.

“This is a fantastic achievement and a big step towards our aim of getting one million more Britons cycling regularly by the end of 2013. It's great to see that so many people have been reminded of how much fun can be had from cycling and with further local rides across the Autumn there's still more to look forward to."