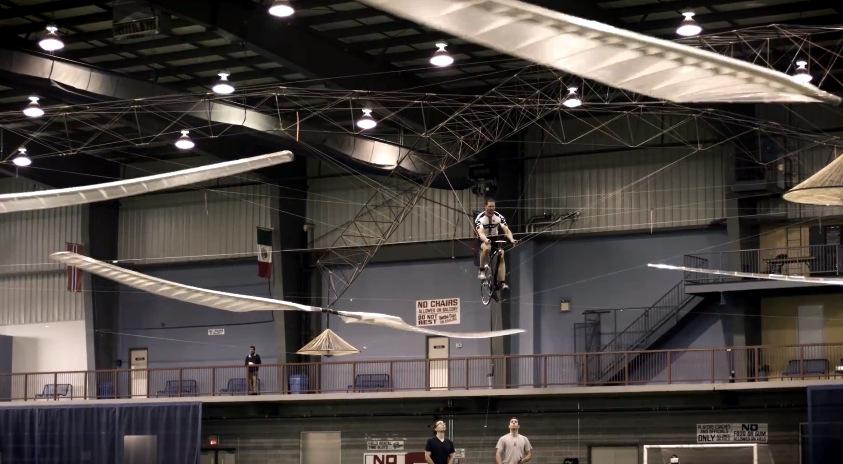 A team from Canada has claimed the 33-year-old Sikorsky prize for the first human-powered helicopter flight.

To win the $250,000 contest, the AeroVelo Atlas team from the University of Toronto had to fulfil three challenging conditions laid down in 1980 by the American Helicopter Society (AHS). The requirements included a flight duration of 60 seconds, an altitude of 3 meters and sufficient control over the helicopter to keep it within a 10 meter square.

On June 13, the Atlas helicopter was airborne for a total of 64 seconds, and reached an altitude of 3.3 metres. The achievement was yesterday officially ratified by the RHS.

Engineer Dr. Todd Reichert, along with Cameron Robertson, led the AeroVelo team and was the Atlas helicopter’s pilot and power plant for the flight.

The prize-winning flight was the last chance the team had on June 13 to go for the requirements after previously managing 2m and 2.5m flights. Their venue, an indoor football pitch, was about to be used for evening practice games.

Reichert, a nationally ranked speed skater, told Wired that the most hazardous part of the flight was coming back down.

“For us, the dangerous part is coming down from altitude,” he said. “Climbing is no problem — it’s in the time period between 15 and 40 seconds that is really tough.

“You’re throwing everything you have into it,” he said.

But until you’re off the bike and on the ground, there’s no time to get excited. “There is really zero thought of, ‘oh, I can do it.’ There is no feeling, only doing.”

With an overall width of 58 meters, the Atlas is larger than any operational helicopter ever constructed, though it weighs only 52 kilograms. It has four 20.4 meter (67 foot) diameter rotors that are powered by the pilot pedaling a Cervelo carbon-fiber bicycle. The Atlas project was begun in January 2012 and made its first flight in August 2012.

It’s also incredibly fragile. “At all times during the flight, the helicopter is right on the edge of falling apart,” said Cameron Robertson. “If something goes wrong, as happened twice, there’s a chance of the entire helicopter disintegrating in mid-air.”

Robertson and Reichert’s team have been in a months-long race with the University of Maryland’s Gamera squad, whose similar human-powered quadcopter achieved a 65.1-second flight, but failed to meet the prize’s altitude requirements. Both helicopters are  very delicate and the teams have both alternated spells of flight attempts and spells of rebuilding wrecked helicopters.

The Sikorsky prize was established in 1980 after the Kremer prizes for flying human-powered fixed-wing aircraft had been won by Dr Paul MacCready. Initially worth $10,000, the Sikorsky prize was increased to $250,000 in 2009, stimulating the renewed interest that led to the Atlas team’s remarkable achievement.

“That is exactly why we raised the stakes,” Sikorsky’s Mark Miller said in a statement. “To encourage creative thinkers to prove that what is considered impossible is often proven to be possible.”

Amazing as it is to read about this feat, there's no substitute for seeing the Atlas in action to get across the sheer jaw-dropping elegance of this vast carbon fiber conraption, so here's a couple of videos.