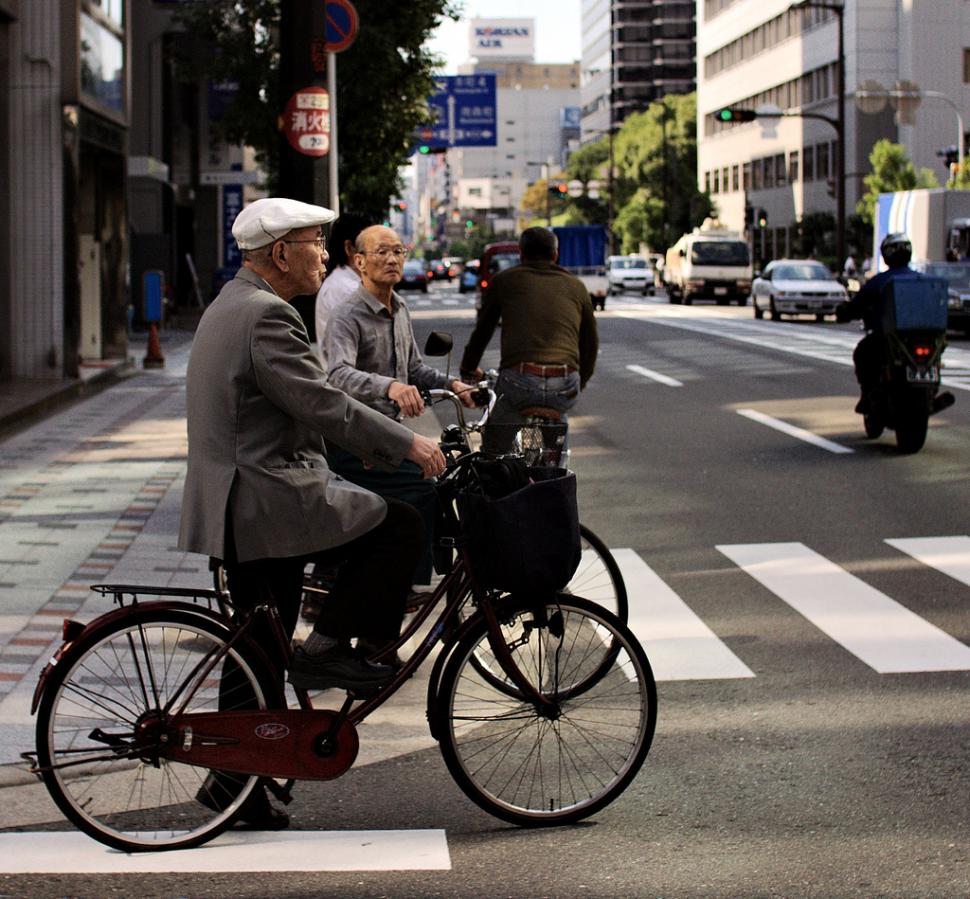 Age is no barrier to cycling, as these Japanese gents prove. Image by JanneM via Flickr

Scotland's oldest cyclist hangs up his wheels - at 96!

Crediting cycling with his health and longevity, Neil Sinclair switches to an exercise bike.
by John Stevenson

Mr Sinclair, who will be 97 this month, told the Daily Record: “I’ve cycled all my life and it’s kept me fit. But I’ll be 100 in three years time and at my age, I think it’s safer for me to keep off the roads.”

“I’d love to get back on a real bike but with all the potholes and cars going so fast it’s not sensible.

“I got the exercise bike from a neighbour and it means I can keep on cycling. I still do thousands of miles, I just don’t go anywhere.

“I used to stop off at hotels for my lunch. Now, when I’m hungry, my wife Elizabeth brings me out a piece of fruit cake and a cup of tea.”

Mr Sinclair took up cycling when he returned to Scotland after the Second World War.

“Cycling has been my hobby my whole life,” he said. “When I was younger, I used to cycle to work in Perth every day. I took my bike everywhere. I’ve had a few mishaps but I’ve always bounced back.

“And my family has always felt I’m sensible enough to know when to stop.

“But I’m healthy thanks to cycling. I could never think of sitting in front of the television doing nothing.”

Landmarks of Mr Sinclair’s cycling life include completing a charity ride from Lands End to John O’Groats in eight days when he was 70 and celebrating his golden wedding anniversary with a 62-mile ride to Pitlochry. His wife Elizabeth drove while he rode.

Elizabeth, 85, said: “Neil has always loved cycling and has done hundreds of thousands of miles.

“We used to take romantic trips and I’d drive in front and meet him at our destination.

“I’m sure he’ll cycle the rest of his days on his exercise bike.”

He’ll probably go out singing, his other great passion. “My mother was an operatic star so I sing opera – La Donna e Mobile (The Woman is Fickle) and other songs,” he said. “I sing anything I can think of. I also love Ave Maria.

“I can also talk to people because, as fast as I pedal, I’m not going anywhere. People I used to see on my travels now come to visit me at home.”

England’s oldest cyclist is thought to be 100-year-old Richard Howard, from Winslow in Buckinghamshire.