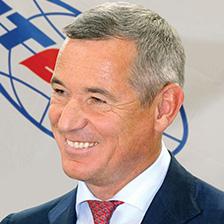 Katusha owner Igor Makarov, the energy billionaire who is also president of the Russian cyclcing federation, the FVSR, and a member of the UCI’s management committee, has ruled himself out of launching a challenge to Pat McQuaid when the current UCI president comes up for re-election later this year.

However, Makarov, who represented Russia as a rider before going on to amass a personal wealth estimated by Forbes at $1.5 billion through his Itera holding company, says reform is needed and has criticised the current UCI leadership for being out of touch, reports the website R-Sport.

There have been persistent rumours that Makarov might seek to run for the UCI presidency in September’s elections, but today he insisted, “No, it’s not true.”

He went on: “I have said many times that I have so many positions and I’m very busy. I’m totally focused on my current work, including the project for the development of cycling in Russia.”

Makarov, however, believes that the structure of the UCI is overdue for reform. “There should be some reorganisation,” he maintained.

“The UCI president is the head of both the union and the management committee. I think it’s not right. The UCI's structure is a structure from the last century.”

He also criticised the governing body for a lack of transparency, citing the recent row over its licence committee’s refusal to award Katusha a WorldTour licence for the 2013 season, a decision that the Russian team successfully challenged earlier this month at the Court of Arbitration for Sport.

The licence commission which made the original decision is appointed by the UCI but acts independently of it, and Makarov claimed its members lacked the knowledge to determine such matters.

“Behind the scenes I learnt that this committee included five Swiss citizens who had never ridden a bicycle and they made the decision whether to give or withhold the license. It’s not criticism, but a question," he reflected.

The fact that Makarov has declared that he will not himself stand as a candidate for the UCI presidency does not mean he won’t throw his weight behind some other contender, with earlier rumours linking him to a prospective bid by former pro André Tchmil.

However, in recent days Tchmil, who was general manager of Katusha until 2011 when he left the team due to a run of poor results, has in recent days said he will not be looking to challenge for the UCI presidency and instead has ambitions of running for the top post at the European Cycling Union (UEC).