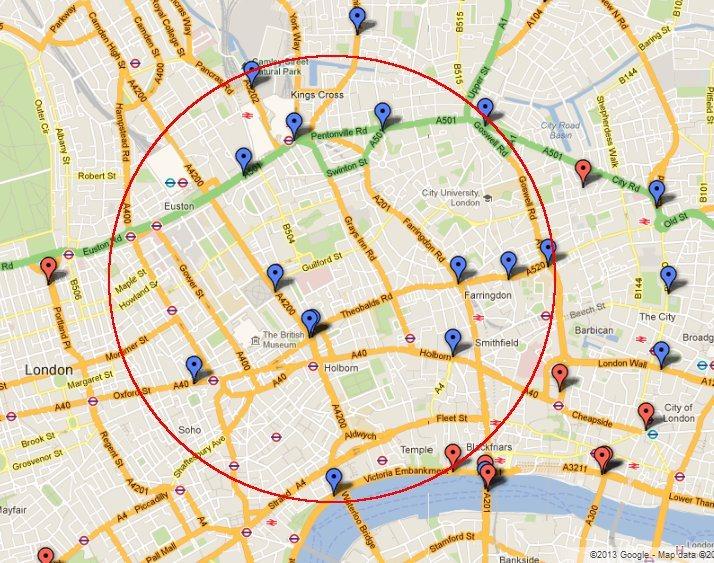 Stats reveal London's deadly cycling zone… if you're a woman

Blogger finds 14 women and no men killed in one area of Central London since 2001... nearly all by lorries
by Simon_MacMichael

Cycling blogger Adrian of I Cycle Liverpool has uncovered the startling fact that in one sizeable area of Central London, 14 women – but no men – have been killed while riding bikes over the past 12 years, all but one by a lorry or bus.  The finding was made as he was analysing STATS19 data on cyclist fatalities over the last decade or so.

Adrian, who blogs at I Cycle Liverpool, was using mapping to look for patterns in the data, which is collated by the Department for Transport, when the geographical coincidence leapt out at him.

That zone extends from beyond the Kings Cross Gyratory in the north to Waterloo Bridge in the south, and from Fitzrovia in the west to the Barbican in the east.

And within that killer circle, 14 female cyclists – and women exclusively – have lost their lives from 2001 onwards, and in 13 of those incidents, the vehicle involved was a lorry or a bus.

It’s an observation rather than a fully funded piece of academic research, it’s based on an arbitrary line drawn round victims with their gender in common – immediately outside the circle, there’s a cluster of male deaths at the northern end of Blackfriars Bridge - but it’s one that merits closer examination.

As Adrian points out, in the period concerned, across Great Britain as a whole, male cyclist fatalities outnumbered female ones by a ratio of 4.9 to 1. Yet here, in the heart of London, is a sizeable zone that consistently bucks that trend.

That an unusually high proportion of female cyclists are killed in London, and that large vehicles are involved in most of those incidents, is not news, and the issue has been the subject of research by academics and transport experts alike.

One finding from such studies is that females may be more at risk because they are more likely to stop at red lights and to ride to the left to keep out of the way of traffic – something that then puts them in the danger zone of a left turning lorry.

Lorries were involved in 11 of the 14 fatalities, buses in a further two. All but two of the incidents happened in daylight. In seven of the 13 deaths caused by large vehicles, the lorry or bus was turning left. But in some of these cases, where the cyclist was ahead of the large vehicle and not seen.

Speaking at the parliamentary inquiry Get Britain Cycling last month, Martin Gibbs, policy and legal affairs director at British Cycling pointed out that in 2011 not a single cyclist was killed in Paris.

It’s an attention grabbing statistic, and in some ways a misleading one – the area concerned is more comparable to Inner London than Central London – but much tighter restrictions on the movement of large lorries in the centre of the French capital are one reason behind it.

Cyclists are killed there, and by lorries – a female cyclist near Bastille the same week Gibbs cited that 2011 figure, and last October, an Equipe journalist who specialised in cycling – but the restrictions on their movements, and widespread infrastructure such as kerbed lanes, does appear to be having an effect.

When we looked at the incidents in London identified by Adrian, or at least those we can find details for – three, one as recent as 2009, received no press coverage whatsoever as far as we can ascertain – we found some common themes.

Many victims were travelling in the morning from home to a workplace of place of study in the zone concerned.  Most worked or studied in what could broadly be termed creative industries, including publishing and fashion, both of which have a higher than average proportion of female.

Both those, and other creative industries, have heavy concentrations in terms of businesses and academic institutions in the circle on the map; so too, it should be acknowledged, do medicine and the law, yet we’re not seeing lawyers or medical staff among the victims.

Could it be that women working or studying in the creative industries, often typified by low pay or even unpaid internships, are more likely to ride a bike to work partly for economic reasons and partly because they see fellow workers riding in? Is there a case for targeting specific types of employers or academic institutions with a safety message?

The only cyclist to die in an incident not involving a lorry or bus was an exception to the general trend for several reasons – she died following a collision with a motorbike, was an accountant, worked not in the circle identified by Adrian but in Canary Wharf, with the incident being the only one of the 14 to take place on the Embankment.

That’s perhaps significant because location, too, emerged as a potential factor, with three broad areas in particular causing concern – the King’s Cross Gyratory and Euston Road, with three fatalities and others nearby, Clerkenwell Road, where three successive main junctions have each been the site of a woman losing her life, and the Southampton Row area, again with three deaths.

While many of the incidents resulted in calls for safety of cyclists to be improved and, in some cases, promises of action from the relevant authorities, to date little has happened; of those three wide locations, only King’s Cross has come under specific scrutiny as Transport for London has launched its junctions review, now ongoing for more than a year.

London, it’s true, is a huge city, and it is simply impossible to introduce new infrastructure overnight on a wholesale basis, but does the safety focus on introducing changes at existing and planned cycle superhighways, none of which come right into the heart of the city, mean that areas where action is most urgently needed are being ignored?

If there is a crumb of encouragement in the figures, it’s that while 2009 was a particularly black year, with four of the fatalities, since student Deep Lee died at King’s Cross in October 2011, there have been no further deaths within that circle.

It was her death, plus those of Brian Dorling and Svitlana Tereschenko further east, at Bow Roundabout, that saw the issue of cycle safety become a political issue and led to mayor Boris Johnson ordering Transport for London to conduct its junctions review.

In those same months, again in east London, the horrific injuries sustained by Times journalist Mary Bowers led to The Times launching its Cities fit for Cyclists campaign that has also kept the issue of cycle safety high.

The London Cycling Campaign, meanwhile, says that it is making progress in getting councils to sign up to its Safer Lorries, Safer Cycling pledge.

Earlier this month we highlighted a Transport Research Laboratory report that was largely based on data from 2010 and 2011 and said there was little awareness within the construction industry of the risks their lorries posed to cyclists in London.

Could it be, however, that 2011 may come to be viewed ultimately as a watershed year, at least for the deaths of female cyclists in that killer zone? Are the safety messages aimed at cyclists and drivers of large vehicles finally bringing about a change?