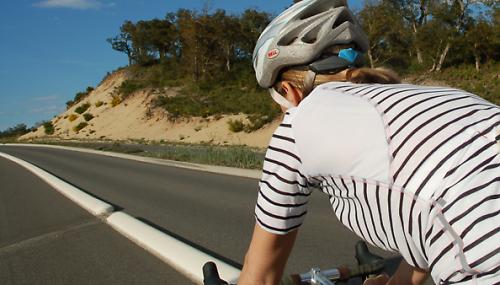 Cafe du Cycliste, the French Riviera clothing company that sets out to avoid “the full polyester dogma and the mimicking of pro racing style,” has brought out a women's range of jerseys.

World champion canoeist and keen cyclist Rémi Clermont, who founded the company, told us that the overwhelming brief from women cyclists was to produce something with "no pink and flower pattern please" – so they went for fetching Gallic stripes instead. Just string some garlic round your neck to complete the look. 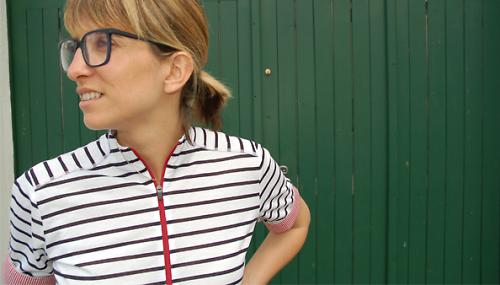 The jerseys are currently available in a wide navy and white stripe, with contrasting full-length red zip (the Suzanne - £99) and a narrower red and white stripe with white collar and cuffs and short zip (the Henriette - £89). Rémi says there will be another design available shortly, so check back soon. 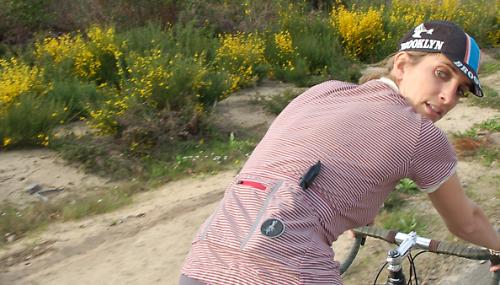 The devil is in the detail and these have loads; light technical Italian polyester fabric with mesh panels for coolness, three roomy back pockets with a fourth zippered key pocket, reflectives on the back, room for a pump and a silicone hem gripper to keep everything in place.

The cheeky little logo – a buxom pin-up girl on a bike – is just the icing on the pain-au-raisin. If you're planning your summer cycling holiday (to the French Riviera?) then have a look at these EVOC 280 litre bike bags. They've been improved for 2012 and claim to have better protection, better handling and to be 'optically enhanced'. We think that means they look better – you be the judge of that.

What we do know is that they're fully kitted out: ripstop nylon outer, plastic bumpers and extra reinforcement at corners, and thick padding. There's now an extra handle for lugging and newly designed foam inserts take all kinds of frames - road bikes, triathlon bikes, and cross-country, downhill, freeride or enduro mountain bikes. Inside is a special frame pad that protects your paintwork from handlebars and other components and everything is held in place with Velcro tabs. There's no need to take off the rear derailleur thanks to a protected recess.

Separate compartments for pedals, tools and spares keep things organised and reinforced side openings hold your wheels, with special protection to stop the axles puncturing through the rest of the bag. It's supposed to be as easy to handle as a wheely suitcase thanks to tough skate wheels and sealed bearings, and when not in use folds down to a manageable 30cm x 38cm x 30 cm.

Made with typical German care and attention, these come in at around £240 and weigh 8.6kg empty, according to EVOC.

King of the Mountains prints 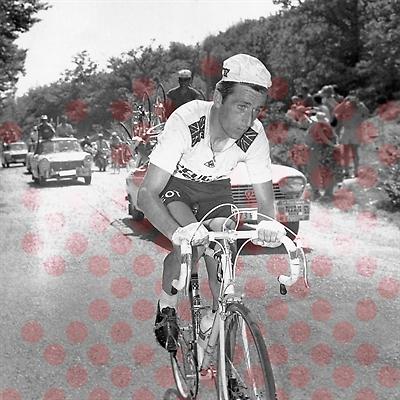 Artist James Straffon has produced a limited edition series, King of the Mountains, a set of nine prints measuring a dinky 15cm x 15cm and they're now available for sale ahead of the Le Tour show opening at SNAP gallery in Central London on June 30.

The series is based on historic photographs of key mountain stages in the history of the tour, subtly referenced by James with patterns of red dots, which echo the famous polka dot jersey worn by the KoM. British cycling legend Tom Simpson features in one of the prints. The others are include Eddy Merckx, Fausto Coppi, Gino Bartali, Lance Armstrong, Marco Pantani, Jacques Anquetil, Charly Gaul, Louison Bobet, not to mention the famous mountains themselves.

Each print is offered in a limited edition of just nine worldwide and can be supplied unframed or framed, for £250 each.
One of the most interesting details is the range of support vehicles that accompany the riders in many of the photographs – showing just how much things have changed on the Tour. A slighty left-field one here: a company that makes covert security earpieces for the FBI, Secret Service, CIA and U.S. Military have developed what they say are the safest headphones available for sportspeople.

They work on the premise that they are so tiny, they never block the ear canal, meaning that you can always hear what's going on around you, be that traffic, children or your adoring fans cheering you on. Now I've always had a far cheaper alternative – the crappy free iPod headphones let in so much external noise that you can hear a pin drop. The EarHeroSport is very low-profile though, and lets you pose as a bouncer/ spy. 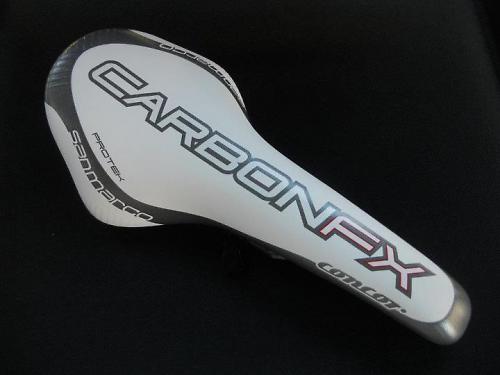 Details are sketchy (if we're honest, details are currently this pic, and, er, that's about it) but saddle maker Selle San Marco has announced a new version of its classic, swoopy Concor seat.

Intended for cyclo-cross and mountain biking, and therefore any other application where your saddle gets a hard life, the new model has Selle San Marco's hard-wearing Protek upper. Claimed weight is 162g, and the pricing is yet to be determined. Available late summer or autumn, according to importer Madison Cycles. 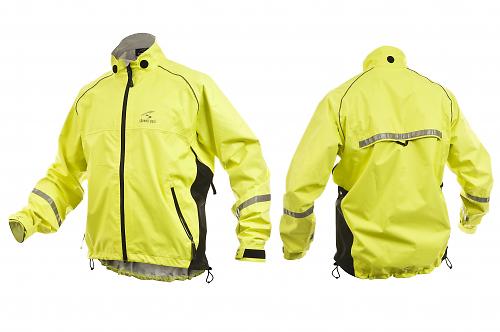 Showers Pass, the Portland, Oregon cycle clothing brand, has so far not been known to many in the UK, but having signed a deal with NRG4 distributors it's set to be much more widely available.

Portland, much like here, is known for dry summers (well, here's hoping) but long mild, wet winters, so they've got waterproofing pretty much down. They started out in raingear but now also have a range urban commuter clothing that translates nicely to the office.

Andrew Perry of UK distributor NRG4 says that Showers Pass is technically top of the class, with “the very best fabric on its clothing including eVent fabric – widely recognised as being the best fabric for this type of clothing.”

“The clothing often comes out top in clothing reviews and similar urban wear is normally only found in the UK through the likes of Brompton or Rapha – like the Showers Pass Portland jacket for commuters.”

We gave the Portland a great review too. 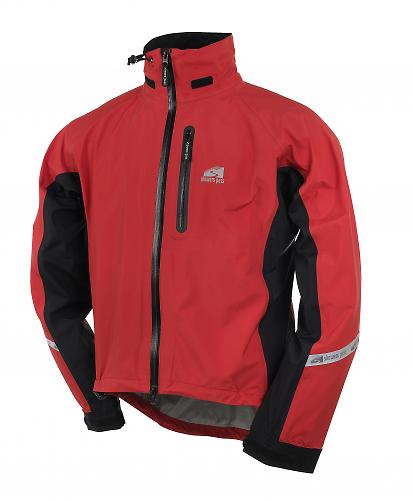 You won't find it online though, as an incentive to bike shops, and there's no minimum order for dealers either. That's attractive to business owners, so expect to see these togs in your LBS soon. 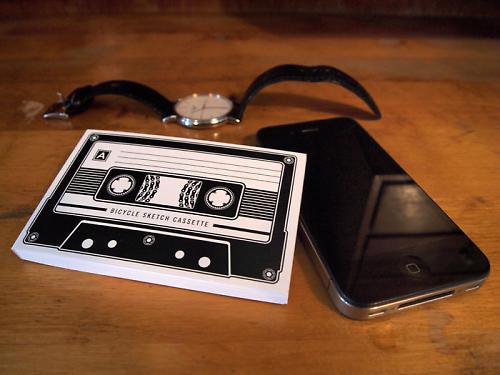 This is nice. From the mind of Christopher Perry, a 24 year old freelance designer, cyclist and student, comes the Bicycle Sketch Cassette.

Like with most of his ideas the Bicycle Sketch Cassette came to him whilst he was out on his bike. Chris says he cycles pretty much every day and being a designer and a university student often needs to take notes and make sketches on the move, so he came up with the idea to make a easily pocketable note-pad/sketchbook that you could take with you no matter what type of transportation you used, although we’re pretty sure you can already buy many many many types of such handy things in the shops.

Anyway, Chris says the cassette tape was the obvious choice, both because a cassette tape is used to record things and the size is ideal (The pad is smaller than an iPhone and would actually fit in a tape recorder), and to make it appeal to cyclists, his main target group he incorporated bike parts like the chain, nuts and chainrings in the design.

The Bicycle Sketch Cassette is 100x63mm small, and for paper geeks, we know you’re out there, the cover is printed on white 300g coated silk stock and the 50 removable sheets are blank 115g white matte stock.

More details from What Chris Did

1
Near Miss of the Day 378: What is it about overtakes on straight roads into oncoming traffic?
2
Win! Fulcrum Wind 40 DB wheels worth £1,100 up for grabs!
3
3 winners chosen! 3 sets of Altura autumn/spring cycling kit have been won.
4
Drunk driver who crashed into traffic island blamed cyclist
5
Near Miss of the Day 375: Close pass, traffic island and left-hook - all by one driver in the space of seconds
6
Zwift partners with Haute Route for three-day Watopia challenge
7
BMC’s NTT Pro Cycling team bikes for 2020
8
Near Miss of the Day 376: Frightening footage shows driver overtaking cyclist with coach coming the other way