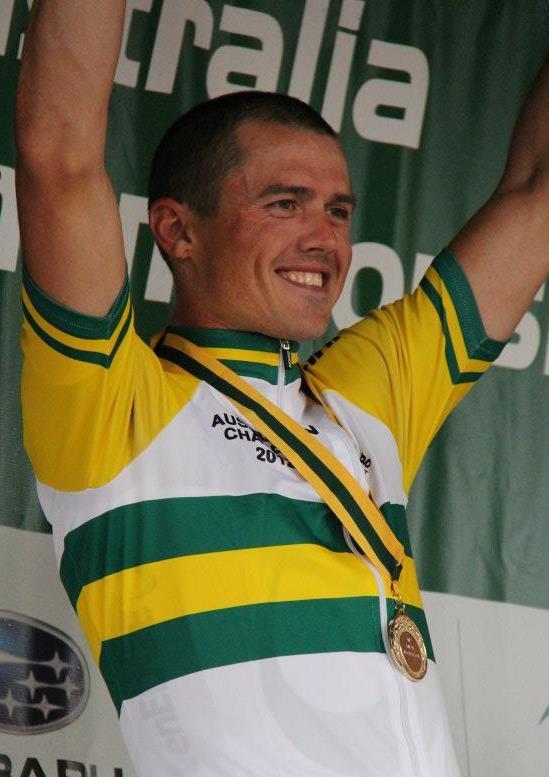 Simon Gerrans of GreenEdge, the only Australian to have won a stage in each of cyling’s three Grand Tours, is the country’s new national road race champion. It is the first time that the 31-year-old former Team Sky rider has won the title.

In what organisers described as a “brutal” race in which only 23 of the 140 starters went into the 16th and final lap of the 10-kilometre circuit in Buninyong, near Ballarat, Victoria, Gerrans outsprinted Lampre-ISD’s Matthew Lloyd, who finished second, and Team Sky’s Richie Porte, third, to take the green and gold jersey.

The trio crossed the line more than a minute ahead of their closest pursuers.

"This is such an honour, it is far and above one of my proudest moments in cycling and to now [I get to] be crowned Australian champion for the next 12 months, and to be able to wear the green and gold through all the big races in Europe," Gerrans said afterwards.

"I just capped off some great team work from GreenEdge today, I am so proud of all of the guys," continued the GreenEdge rider, who went on the attack on the final climb of Mount Buninyong, only Porte and Lloyd able to go with him.

"The way the race unfolded didn't really go to plan, but it went to plan that I won it," he reflected. "I was going to try and save as much as I could for the last few laps of the race, but as it turned out, the race was blown to pieces after about 50 kilometres.

"Then with a couple of laps to go, Cameron Meyer [his GreenEdge team mate] who was out the front ran out of gas and it became an even playing field as we had the same amount of guys at the front as a lot of other teams, so it was pretty much every team for itself and we lost our advantage.

"I have done a lot of hard work over the past couple of months to start the season in good shape, so that's why it is such a thrill that all that hard work has paid off with a win." Gerrans went on.

Initially, Gerrans thought that the Team Sky rider who had set off in pursuit of him was CJ Sutton, which might have posed him more of a challenge in the sprint.

"It was only about five hundred metres before the line when I realised that it was Richie Porte, so I was a little less worried knowing it was him," he revealed. "Coming to the finish after a long tough race like that one with a time triallist and a climber, I knew I had a bit of a kick on me to finish off a race like that, so I was confident coming to the line."

Today’s victory is the first for GreenEdge’s men’s team, and comes 24 hours after Amanda Spratt of GreenEdge-AIS won the women’s title.

Gerrans thanked his team mates for their help during the race, in which they helped chase down a series of breaks, before GreenEdge's own Cameron Meyer went off the front and stayed there for 30 kilometres before he ran out of steam with two laps still to race.

"It is such a great way to start a season with a new team and some big races here in Australia to get the season under way, I was really motivated to start the season in good shape," Gerrans said.

"It was a race that had everything in it we just really tried to dominate the race with numbers at GreenEDGE and try to have guys in the breakaway all day long." He concluded.

The Australian National Championships conclude on Tuesday with the men’s and women’s elite and under-23 time trials.