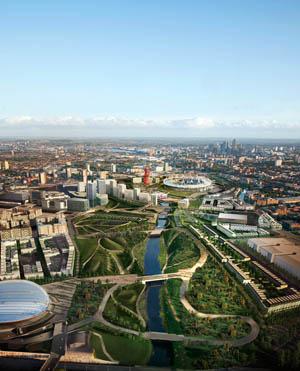 Son of Eastway? Plan for Olympic Park cycling legacy to be unveiled at public meeting tomorrow

Stratford Town Hall is the place to be this evening (Thursday) for anyone interested in what sort of cycling legacy will be left behind in the Olympic Park once all the 2012 hoopla is over. Tomorrow evening between 6.30 and 8.30 The Olympic Park Legacy Company (OPLC) will be presenting its plans for road and mountain bike circuits in the park ahead of submitting a planning application later this month.

We're not sure whether the OPLC is planning for a big crowd as the meeting was only announced on the British Cycling website on Tuesday. The plan proposes a one mile circuit crossing the River Lea in the north of the park with a mountain bike trail in the north east of the park, (which sounds like roughly were the old Eastway circuit was), with a new open space created on the opposite side of the river valley in Hackney.

The route has been created with British Cycling, Sport England, and the Lee Valley Regional Park Authority, which will own and operate what will be known as the Lee Valley Velopark.

The subject of the cycling legacy in the Olympic Park has been highly sensitive, cycling was the only sport that had to give up a well used existing facility to make way for the Olympic park with the demolition of the Eastway Cycle Circuit. After much argument a new venue for cycling in North East London was eventually found at Hog Hill in Redbridge some miles to the east of Eastway. However a Velopark including road cycling and mountain biking circuits was always part of the plan for the Olympic Park, London's cycling community and the Eastway Users Group in particular have been alert to any hints of backsliding on the Velopark promise. Earlier this year road.cc reported that fears that the OPLC wanted to ditch the cycling circuit or drastically modify it to make way for a housing development in the west of the park.

Ditching the cycling circuits was probably never a realistic option and it would seem that the river crossing has also been retained in the plans too what compromises, if any, have had to be made to accommodate the competing demands that the Olympic Park needs to satisfy will become clear tomorrow evening.