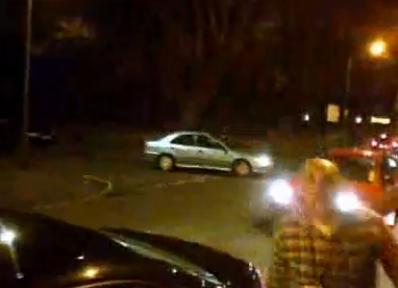 A driver who grabbed a cyclist by the throat during a road rage incident in Manchester has been fined £200 for common assault and driving without due care and attention. Michael Stewart, aged 47, had given himself up to police after helmet cam footage provided as evidence by the cyclist had been released to the media.

Stewart, a television sound recordist from Congleton, had pleaded guilty to those charges but had denied a more serious charge of dangerous driving and was found not guilty of that offence at Manchester magistrates’ court, reports the Manchester Evening News.

District judge Jonathan Taaffe described the incident, which happened during the evening rush hour on January 26 this year on St John’s Road in Lonsight, as “reprehensible and serious.”

The cyclist, university researcher Neil Chatterjee, told the court of how he banged on the window of Stewart’s BMW, which was overtaking him in an illegal manoeuvre.

“I was pretty scared,” he revealed. “I thought: 'The only way it's going to end is badly.' I honestly thought I was going to get knocked off.”

Video footage from Mr Chatterjee’s helmet cam was played to the court, showing Stewart get out of his car, walk round it and put his hands up towards the cyclist’s neck.

“He ran around and he looked really angry,” added Mr Chatterjee. “I thought: 'I'm going to get hit here.' “He didn't hit me, he grabbed hold of me by the throat.”

Stewart said he had got a grip on Mr Chatterjee’s clothing, but had not taken hold of his throat, but the judge disagreed.

Besides the £200 fine, he was also told to pay £200 costs and had five penalty points added to his driving licence, plus a six-week community order and a four-week curfew.

Judge Taaffe accepted that Stewart had shown “clear remorse” but added: “You caused no injuries, but it was still a reprehensible attack, a serious attack, and an act of road rage.

“It's unacceptable to behave as you behaved towards other road users. All road users deserve respect.”

That echoed comments made by Mr Chatterjee shortly after January’s attack, when he said: "I just want road users to respect each other.

“I don’t think it should be war between motorists and cyclists. As far as I’m concerned there are good road users and bad road users. People should be thinking about the consequences of their actions."