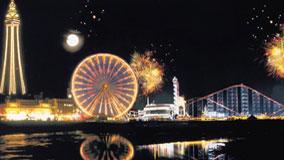 "Money is wasted on cyclists" claim...
by Mark Appleton

Blackpool was made a Cycling Town in 2008 and awarded £3m by Cycling England for a range of initiatives including the creation of four cycling lanes that would provide access inland from the famous Promenade to the rest of the town and the neighbouring countryside.

But a representative of local cabbies says the money would be better spent on improving road surfaces rather than building what he claims are little-used cycle facilities.

"Has anyone from the council seen the appalling road surfaces in Whinney Heys Road and Whinpark Avenue by Victoria Hospital? Don't ambulances need good roads for the health of patients?

"Money is being wasted putting cycle routes in places where I rarely see a bicycle.

"And the cycle route on the pavement right next to the taxi rank in Bank Hey Street is an accident waiting to happen. Can anyone please tell me why there is a dedicated cycle route going east and west on Chapel Street in addition to another cycle route on the other side of the road? I rarely see a cyclist there."

Cycle Blackpool is the body set up by Blackpool Council and charged with delivering the projects which Cycling England’s cash is paying for.

Carol Bracegirdle, Travel and Road Safety Manager for Blackpool Council said:  "The money provided by Cycle England to Blackpool Council is to encourage and promote cycling in the town of Blackpool to a broad audience that includes both residents and tourists to the town. The funding was specifically given for cycling projects and cannot be used for road maintenance.

"The routes that are currently being constructed are being created to encourage novice cyclists to get on their bikes which will include visitors to our town who are welcome to come along and try out the Blackpool Hire Bike scheme, not only enjoying the sites of the Blackpool Promenade but coming inland to enjoy areas off the beaten track including Blackpool Stanley Park and the Zoo.

"Some areas of the town have high levels of deprivation and poor health and by promoting cycling it is hoped that residents will gain considerable benefit from this activity."