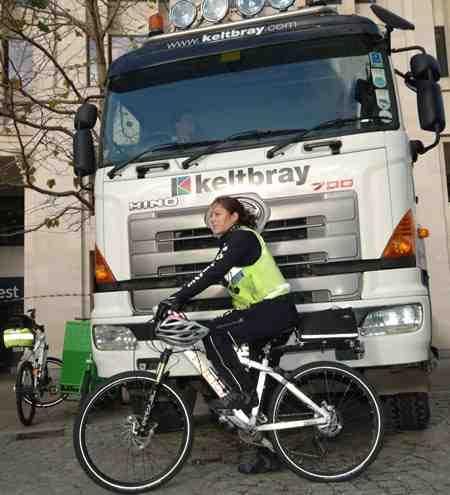 Haulage industry seeks to reach out to cyclists

The onus is on drivers says trade body
by Mark Appleton

Cyclists and lorry drivers are never going to see eye-to-eye, in the literal or metaphorical sense of the term.

But both sides would probably agree that a combination of mutual respect, training  and education together with technical solutions to blind-spot issues has got to be the way forward, tempered always by an acknowledgement that if things go wrong it is the cyclist who inevitably comes off worst.

Here at road.cc we continue to report on and monitor both specific instances highlighting the vulnerability of cyclists and any developments that will help prevent the needless deaths that occur when riders are struck by vehicles that are many, many times their size and weight.

Given the growth of cycling in the UK, the haulage industry appears to be waking up to the fact that, while its members often view themselves as “kings of the road,” their responsibilities in terms of protecting vulnerable road users cannot be overstated.

But sometimes, we feel, the industry seems to want to portray cyclists as having a tendency to put themselves in harm’s way, giving the impression that faced with these lemming-like tendencies it is lorry drivers that are the put-upon party.

In a press release timed to coincide with the Barclays Cycle Hire scheme being opened up to casual users the FTA said: “Lorry drivers in London should be extra vigilant as thousands of inexperienced cyclists are expected to take advantage of the Cycle Hire Scheme, launched by Transport for London.

“This scheme is about attracting new or novice cyclists onto London’s roads and to ensure their safety, we would like to also promote greater understanding between cyclists, as vulnerable road users, and lorry drivers.”

Gordon is quoted in the release, saying: “Problems occur as cyclists that have perhaps never cycled or not for a long time take to the roads and try to keep up with the more accomplished bike riders that are used to London’s roads and know how to behave around a lorry. The vast majority of truck drivers are well aware of the dangers cyclists can sometimes expose themselves to around heavy goods vehicles, but they must now employ greater vigilance.”

To be fair to Gordon – and we had a long chat with him after being somewhat alarmed by the tone of the release – he clarified that his organisation fully recognises that cyclists are the vulnerable party and that it is incumbent upon lorry drivers to acknowledge and take account of this.

He said: “We are very much saying to the haulage industry: ‘Here’s what you should do, never mind what the cyclists do, this is what you should do to get your drivers’ behaviour sorted out.’ So we agree that the onus really is on the driver.”

That sounds like a step forward to us and there was more PR activity at the weekend when an event, curiously entitled “Lorries for Savvy Cyclists” took place at the Borough Market in London. The event allowed cyclists to sit in the cab of a lorry to get a driver’s eye view of just how much, or little, of the road they can see.

It was coordinated by Better Bankside in partnership with Southwark Council, Metropolitan Police, Mace, Keltbray and CEMEX as part of a wider programme to reduce the risk of accidents involving cyclists and lorries.

In attendance was Lib Dem councillor James Barber, who is a keen cyclist and who described the experience of sitting in the cab of a tipper truck and learning about how little the driver can see as a "real eye opener". His comment is perhaps an unintended indictment of how lax our legislators have been in ensuring cyclist are adequately protected against lorries – especially those executing left turns.

Here at road.cc we support all moves that make haulage companies and individual lorry drivers fully aware of their legal and moral responsibilities in respect of cyclists. We also support initiatives that help cyclists to understand that at present, lorries still have blind-spots and that there are drivers out there who don’t drive as safely and responsibly as they should.

But the pace of change is slow and we’d like the government and the haulage industry do more to introduce legislation and driver training that will decrease the number of cyclist deaths in which poorly driven lorries have played a part.

Sadly it’s a subject we expect to return to time and time again.