Valerio Conti of UAE Team Emirates is the new leader of the Giro d’Italia, the Italian being the best-placed rider overall of what had been a 12-man breakaway group, with the Stage 6 win in San Giovanni Rotondo going Fausto Masnada of Androni-Sidermec.

Primoz Roglic, who had begun the day in the maglia rosa, rode most of the 238-kilometre stage from Cassino with his shorts ripped to shreds after an early crash.

It took time for the breakaway to form, with almost 50 kilometres ridden by the time it happened, and once it did Roglic’s Jumbo-Visma team seemed happy to let it go and for Conti to take the leader’s jersey.

Today’s 238-kilometre stage included the biggest climb yet of this year’s race, the Category 2 Coppa Casarinelle, its summit coming 15 kilometres from the finish and it was as the ascent began that Conti and Masnada attacked from the front of the break.

While some of their erstwhile companions in the escape group tried to chase them down, the Italian pair rode well together, with a deal likely to have been struck to get Conti into pink and Carboni the stage win. 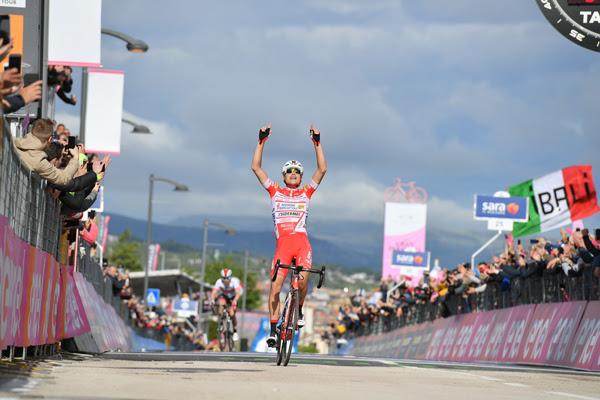 “It took us one and half hours to make the break. The rhythm was crazy. Luckily I was in the right move. We cooperated well. There were several strong rouleurs in the group and I knew I had to make the difference in the climb because sprinting isn’t my forte. Valerio Conti understood that it was the right thing to do and we rode together till the finish. Today I got something I didn’t expect. It makes me enthusiastic and happy.”

“I knew Roglic intended to let the Maglia Rosa go to someone else. But the whole peloton knew it too. Many of us wanted to break away. Fausto Masnada was stronger than me. For an Italian, the Maglia Rosa is the nicest thing on earth. I’ll try to hold on to it as long as I can, until my legs and heart say stop.”