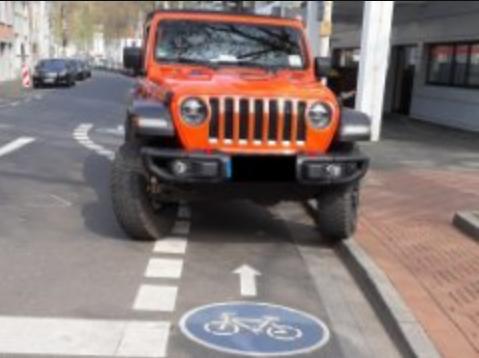 Wegeheld app has been downloaded 100,000 times and resulted in 70,000 photos being uploaded to Twitter
by Simon_MacMichael

A free app that enables cyclists in Germany to report drivers who block cycle lanes has been downloaded more than 100,000 times, according to a report in the newspaper Süddeutsche Zeitung and has resulted in 70,000 pictures of illegally-parked cars being uploaded to Twitter.

Developed by Berlin-based cycling campaigner Heinrich Strössenreuther, the Wegeheld (‘Road Hero’) app enables users to take a picture of cars parked in cycle lanes – or other places where it is forbidden to park, such as pavements or close to pedestrian crossings – and posts the picture automatically to the @DasMussWeg Twitter account.

It also notifies the relevant authorities – similar to the way in which Cycling UK’s Fill That Hole app allows people to notify councils of potholes.

Asked if it was an app for “snitchers,” he said: “Well, snitching in the playground isn’t good, but if one of the kids is holding a knife, it’s all about danger, all the parents are glad that somebody said something.

“And this is actually about danger. If a child or a wobbly old lady cycles past a car parked on the bike path, that's a dangerous situation. That's actually the core issue.

“We have a selfish minority in traffic at the moment who are misbehaving and are making the lives of the majority more difficult.”

Strössenreuther also criticised law enforcement agencies for not doing their job and said that fines for people parking in cycle lanes are not a sufficient deterrent.

“We have a scale of fines in Germany that does not lead to motorists sticking to the rules. If the fines are only a ridiculous ten or fifteen euros, nobody suffers, and unfortunately you can see that on the streets.

“Once you pay 100 euros, you ‘d think about whether you’d put your car there a second time.”