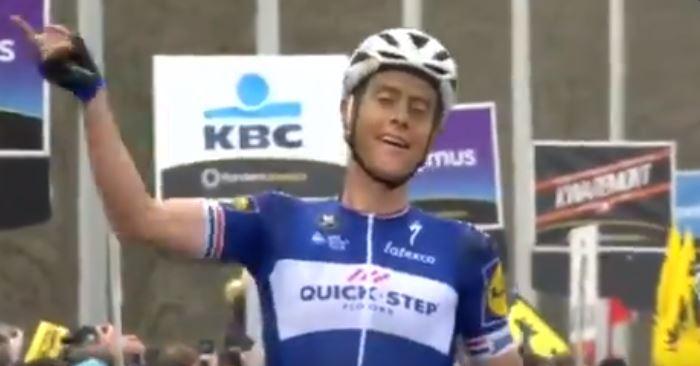 Niki Terpstra has won the Tour of Flanders, the 2014 Paris-Roubaix winner thereby completing a rare double in the cobbled Monuments that makes him the only current rider to have triumphed in both races.

The Quick Step Floors rider followed an attack from Bahrain-Merida's Vincenzo Nibali from the group containing the main favourites, including the likes of Peter Sagan of Bora Hansgrohe and BMC Racing's Greg van Avermaet ahead of the penultimate climb of the 264.7-kilometre race, the Oude Kwaremont.

On the cobbled climb, Terpstra dropped Nibali then caught and passed the three-man group at the head of the race, only one of whom, Trek-Segafredo's Mads Pedersen, was able to offer any kind of resistance as he tried to close the gap on the final climb, the Paterberg.

But Terpstra, whose Quick Step Floors team had fought hard to close down attacks early on in the race, continued to ride away.

Behind, three-time world champion Peter Sagan, launched an attack to try and bridge across to Pedersen and, ultimately, Terpstra, but was brought back into the chasing group with 8 kilometres left.

The 33-year-old Terpstra, who had proved his form earlier this month with victory at the E3-Harelbeke, had a half -minute lead over Pedersen with 5 kilometres remaining, with the main group a further 15 seconds back, a frustrated Sagan trying in vain to get other riders to work with him in trying to close the gap.

Terpstra had time to savour his victory, with Pedersen hanging on for second place and last year's winner Philippe Gilbert completing the podium - as well as a great day over the cobbles for the Quick Step Floors team.