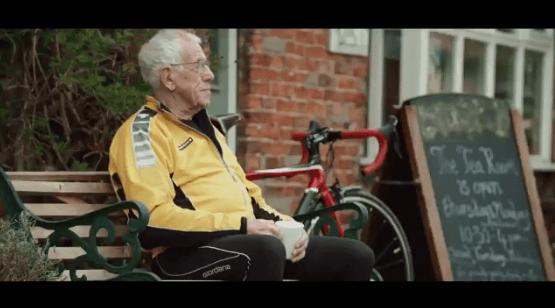 Brian Musson of Scarborough Paragon Cycling Club rides the region's roads and talks of his love of cycling...
by Simon_MacMichael

The 85-year-old chairman of Scarborough Paragon Cycling Club is the star of a new ITV advert to publicise its coverage of the third edition of the Tour de Yorkshire, which takes place from 28-20 April.

Brian Musson is shown riding his Dolan bike in the spot, intercut with footage of the race including Team Sky’s Lars-Petter Nordhaug, who won the inaugural edition in 2015, taking the opening stage of that year’s race in Scarborough.

In the accompanying voiceover he says: “If you’re feeling fit and on a bike, there’s no finer feeling in the world.

“When I’m riding a bike in the countryside, I’m happy. It’s my escape.

“When we first realised we were getting a three-day Tour of Yorkshire with professional teams attracting huge support from the general public, it was absolutely incredible.

“I’ve the greatest admiration for these professionals, who’ll just romp up these hills – getting the miles in, as we call it.

“Day on day on day, whether it’s snowing, or hailstone-ing, or raining, you’re still in absolutely magnificent surroundings.

Ahead of the final stage of last year’s race arriving in Scarborough, where Thomas Voeckler crossed the line ahead of Nicolas Roche to take the stage and overall win, Musson joined Scarborough Paragon Cycling Club honorary life president Stan Chadwick, aged 100, for a ‘Final Mile’ ride.

The community ride featured 180 riders on adaptive bikes and was led by Musson and Chadwick, who had last taken part in a social ride at the age of 90, and whose family had asked Scarborough and Ryedale Community Cycling whether there was a bike he could take part in the ride on.

The ride raised funds for the RNLI.