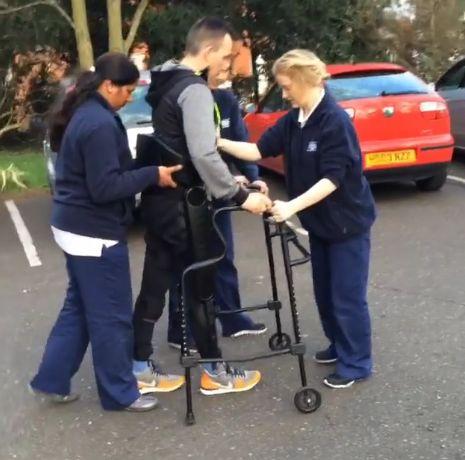 Rehabilitation continues as paralysed trials ace goes for a "stroll" with his Parawalker...
by Simon_MacMichael

Martyn Ashton has taken another huge step – or rather, steps – forward on his rehabilitation from the spinal injury sustained in a 2013 crash that left him paralysed from the waist down, posting a video showing him taking a “stroll” in hospital grounds with the help of a high-tech external frame called a Parawalker.

Posted to the Road Bike Party star’s Instagram account earlier today, the footage shows staff from the Robert Jones and Agnes Hunt Orthopaedic Hospital NHS Foundation Trust, where the Parawalker was developed, helping the 41-year-old as he manages to do something most of us simply take for granted – move forward by putting one foot in front of another.

Taking my first stroll in the Indigo Exoskeleton. I wonder where this thing could take me? Ideas. #royalbuckshospital

Several people commenting on the post mentioned how inspirational Ashton is, and few who have followed his story since a stunt went wrong in a trials demonstration at the British Moto GP at Silverstone three years ago would argue with that.

He first demonstrated the Parawalker – an external frame that allows paraplegic patients to walk ‘normally,’ with the user’s knees locked and the hips used to direct motion, with crutches or a walking frame providing stability – in November with a video that showed him going to the hospital cafeteria for a coffee.

His life-changing accident happened while he was midway through filming the sequel to the hugely successful Road Bike Party film, with Road Bike Party 2 completed with the help of his friends Chris Akrigg and Danny MacAskill.

In December, he said he was selling the Colnago C59 Disc bike featured in the sequel to pay for his medical costs. Fans rallied round, however, and launched a GoFundMe campaign that swiftly raised more than £50,000 for him.