A £1,550 carbon road bike in a largely Shimano Ultegra build
by Mat Brett

The Tifosi Scalare Carbon Ultegra (£1,549.99) is a carbon-fibre road bike built to a race geometry and specced with a mix of groupset components from Shimano’s Ultegra lineup and from Italy’s Miche. 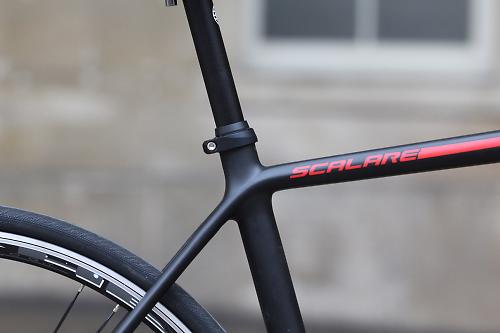 Although it sounds Italian, the Tifosi brand is actually owned by UK bike and component distributor Chicken CycleKit. Chicken deals in many of the Italian brands represented on this bike. Cinelli, Selle Italia, Vittoria and Deda all make an appearance alongside the aforementioned Miche. 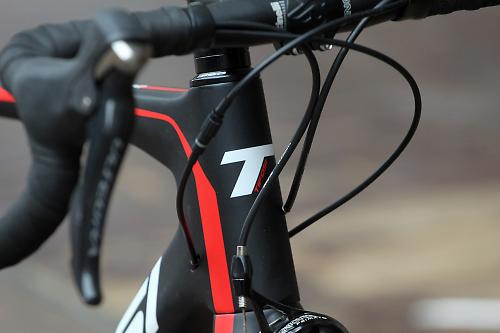 Let’s start with the frame. It’s an attractive, purposeful-looking design made from unidirectional carbon fibre. The head tube houses a standard 1 1/8in bearing at the top, flaring out to take a 1 1/2in bearing at the bottom, the idea being to provide more front end stiffness. That’s a feature that has become prevalent on performance-orientated bikes over recent years. 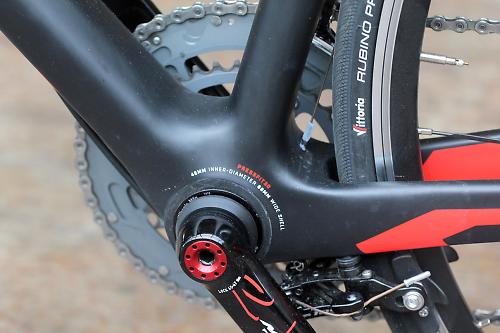 One other feature that's common on bikes of this type is an oversized bottom bracket and, sure enough, the Scalare uses a PF30 standard. We won’t go into the specifics of this design here but it’s intended is to provide more stiffness through the centre of the bike, leading to increased efficiency. Another interesting feature is the siting of the rear brake just behind/below the bottom bracket. Bike brands often claim that the benefit of putting a brake here is better aerodynamics, although the flipside is that it’s in the firing line for water and gunk thrown up from the road. 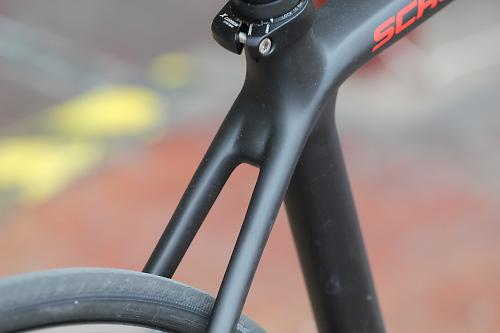 Tifosi has squashed the profile of the seatstays and dispensed with the brake bridge between them – there’s no need for one if the brake is behind the bottom bracket. The idea is to encourage some vertical flex towards the back of the bike, improve the quality of the ride and reduce rider fatigue. 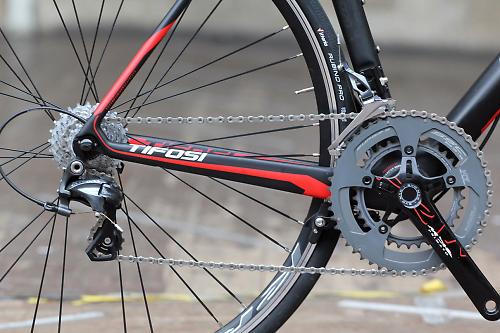 The chainstays, in contrast, are a whole lot chunkier and the down tube is a beefy affair too, designed to transmit energy through the drivetrain with minimal losses.

The Scalare’s cables are routed internally, giving the bike a clean appearance. Tifosi claims a frame weight of 1,050g (small size) which is pretty low for a bike at this price. The complete bike (medium) weighs 8.28kg (18.2lb). 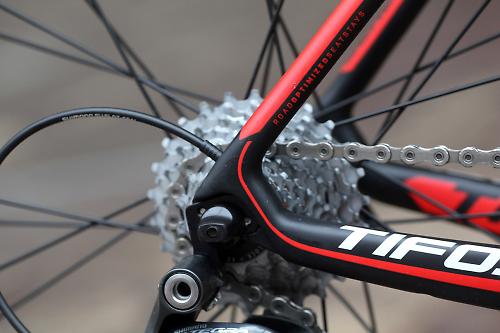 In terms of geometry, the Scalare is race-derived rather than a relaxed endurance-type setup. We have the medium sized model here with a 500mm seat tube that would be 540mm if the top tube was flat (it slopes downwards from the head tube). The effective top tube (if it was flat rather than sloping) is 547mm and the head tube is 145mm. Of course, you can choose to leave the headset spacers in place or remove them to lower the handlebar, but either way this is a bike that’s designed for a traditional low and stretched roadie position. 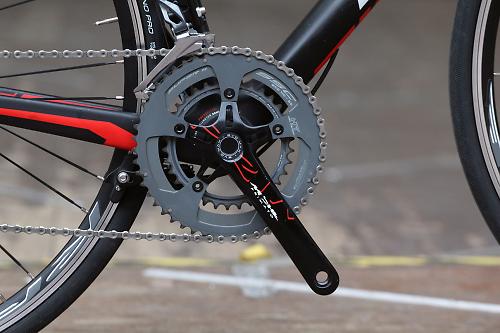 The Scalare is available in five different builds, this being the top specced model. The groupset is a mix of components from Shimano and Miche. The shifters and mechs are from Shimano’s second tier Ultegra groupset while the chainset is a Miche Primato compact with 52/39-tooth chainrings. Manufacturers often sling an FSA chainset into the mix but Miche is an unusual addition. We’ll be very interested to see how it performs. The front brake is from Miche too (the rear is Shimano 105), as are the wheels: Miche Race 707s. These come with 25mm-deep rims, bladed spokes and sealed bearings. The wheels that are fitted on there are Vittoria Zaffiros in a 25mm width. 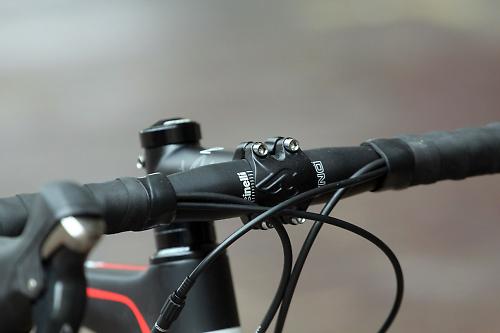 The Scalare is fitted with a handlebar, stem and seatpost from Cinelli’s DNA range while the bar tape is from Deda. Finishing off the Italian theme, the saddle is an X1 Flow from Selle Italia. 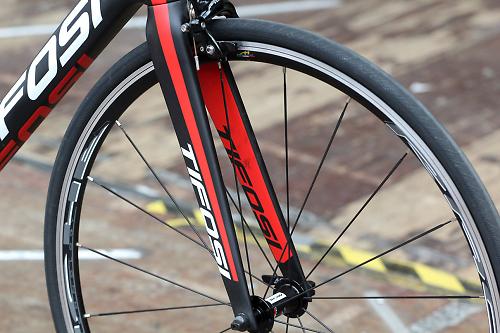 Of the road bikes that we’ve reviewed here on road.cc recently, the closest to the Tifosi in terms of price is the Trek Emonda ALR 6 at £1,700. The Emonda is a very lightweight aluminium bike with a claimed frame weight exactly the same as the Tifosi’s: 1,050g. Don’t be put off by the fact that it’s not carbon – it’s the ride that counts and we were very impressed by what’s on offer here. This bike has a complete Shimano Ultegra groupset. 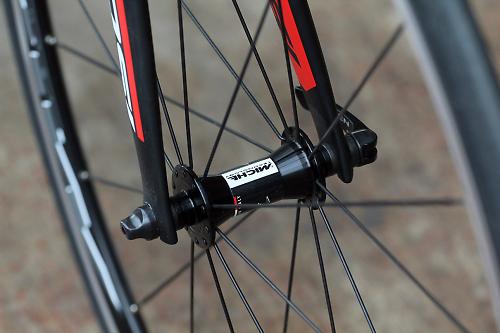 The 13Bikes Intuition Beta (£1,399.99) that we reviewed earlier in the year is a good value aero road bike that’s made from carbon fibre but we felt it was let down by poor brakes and front end stiffness. The drivetrain is full Shimano 105 – the next level down from the Ultegra specced on the Tifosi. 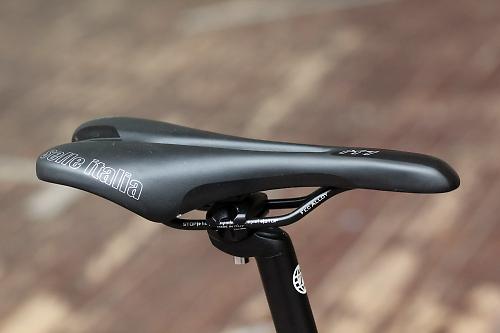 The BMC Teammachine SLR03 (£1,350) impressed us with its excellent performance earlier in the year, although the Shimano Tiagra/105 spec is a downgrade from the Tifosi’s kit. That’s not surprising given that it’s 200 quid cheaper.

Comparing specs only gets you so far. It’s out on the road where you find out how a bike performs and that’s exactly where we’re taking the Tifosi now. We’ll be back with a review soon.