On Friday we brought you the news that Mavic had launched a brand new gravel wheel, the Ksyrium Pro Disc Allroad. And since we were out at the launch in Wyoming, where there's masses of unsurfaced roads and trails, we got the opportunity to try them out, along with Mavic's new Yksion Elite Allroad 30mm tubeless tyre.

For the full skinny on the new wheels head over to our launch story, but in short the £750, 1,620g Ksyrium Pro Disc Allroad is a brand new wheelset with a wider 19mm rim that's UST tubeless compatible and a redesigned hub with a new ratchet drive freehub. It's paired with the 30mm Yksion Elite Allroad UST tyre, to comprise a tubeless system with an all-conditions tread pattern. 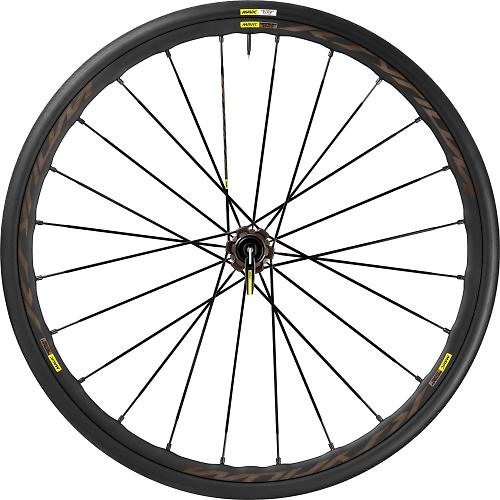 For the ride we bussed it over the Teton Pass and into Idaho, setting off from Tetonia for a 110km point-to-point epic back to Jackson Lake. The first 80km of the ride were all off-road with a big variety of conditions under wheel. There was well-graded gravel roads, the cinder bed of an abandoned railway, some rutted mud tracks and a fair few descents and climbs that were pretty close to the limit of what I was comfortable doing on 30mm rubber. Plus there was 30km of road at the end to get a feel for how the wheels and tyres behaved on the pristine Wyoming tarmac. 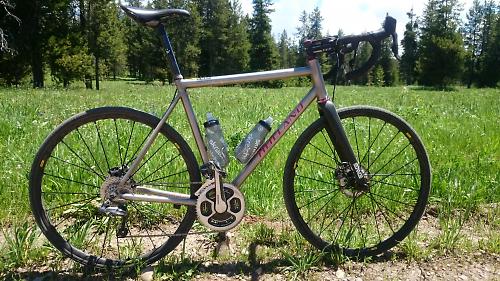 After the wheel swap...

Actually, I didn't set out on the Allroad wheels. Thanks to a minor sizing snafu I wasn't on board one of the Cannondale Synapse Carbon test bikes but instead a rather special Holland Cycles titanium gravel bike, the property of Mavic's regional marketing manager Mike Wilson on only its second outing. Thanks for the lend Mike!

It didn't have the new Allroads though, so I was running 28mm Yksion Guard tubed tyres on Mavic Aksium Disc wheels, with the promise of a wheel swap at lunch. As it turned out, that gave me a much better insight into the performance of the new wheels than I might have had otherwise. Some of the surfaces were pretty challenging on a 28mm tyre. I'm a big rider and I kept the Yksion Guards pumped up fairly hard to try and avoid pinch flats, but the payoff for that was a harder ride and less grip when the surface got rough and broken. And unfortunately I didn't avoid the punctures, either. By the time we'd covered 25km I was stopping for a third time to pull a wheel off the bike: two pinch flats at the rear and one sharp flint through the front tyre had put me back among the team cars. At that point one of the yellow Mavic cars was already carrying an abandoned Synapse: an early spill had left Patrick from Red Kite Prayer with a gash in his calf from his pedal that later needed 16 stitches to pull it back together. Hopefully he's on the mend now: heal up soon Patrick. After a wheel swap I was back on my way on a pair of the brand new Ksyrium Pro Disc Allroad wheels and Yksion Elite Allroad tyres. And boy, what a difference it made. Switching to tubeless had an immediate effect, not just on the quality of the ride but also my state of mind. The more forgiving ride of the softer 30mm tyre was noticeable over the harder and narrower 28mm. Better than that though, the constant fear of flatting the tyres was gone. That meant I could be a bit more ambitious with my speed and my lines, knowing that if I accidentally slammed a tyre into a rock I'd probably get away with it. And I did get away with it, a number of times when I can confidently say I would have ruined another tube had I not changed wheels.

You can rip a hole in a tubeless tyre on something sharp that the sealant won't fix (a couple of people did manage that on our ride) but it's impossible to pinch one flat, because there's no tube to pinch. That means you can run a lower pressure, which means the tyre is more comfortable and conforms and grips better on loose or uneven surfaces. Plus, the wider carcass of the tyre and the wider rim bed of the wheel – the Allroad uses a rim with a 19mm internal width – gives a much bigger increase in the air chamber than the 2mm difference in nominal tyre width might suggest. Mavic suggest running the Yksion Elite Allroad tyre with 40g of sealant, and that should plug up any small punctures with a small loss of pressure. Any damage the sealant won't seal means putting a tyre boot over the inside of the hole and fitting a tube. But if that happens you're no worse off there than you would be on a tubed system. Assuming you remembered your spare tube... 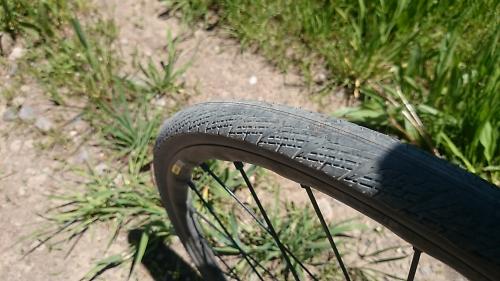 The tread pattern of the Yksion Elite Allroad tyres isn't hugely aggressive but there's enough grip in the file tread that speads from the slick centreline, and the deeper shoulder tread further out, to give you a bit of confidence on the downs and traction on the ups. It didn't rain when we were on the dirt, so I can't really comment on how they cope off road in the wet. We caught a passing shower – complete with two minutes of hail – on the final road section, and everyone got soaked; in as much as that's a test of the tyre's wet weather performance it passed with no issues, but we're looking forward to a longer and wetter full test in UK conditions. The wheels performed admirably. When you're not using a rim brake you can cope with some big hits putting the rim a bit out of true on a ride, but in spite of getting some fairly heavy duty treatment the wheels were still running good and round when we arrived at Jackson Lake. The Instant Drive 360 ratchet freehub makes a cool sound – that's important, right? – and engagement is nice and quick. Also it's a more reliable mechanism than pawls, so a good choice for these wheels in particular, and wheels in general: it looks like Mavic will be shifting all their higher-end wheels over to the system in the future, although it's unlikely to trickle down all the way as a ratchet drive is more expensive to produce. The sealing looks to be good from studying the design – there's a high-quality labyrinth seal protecting the bearings – but it's too early to say what overall reliability is like.

Under power the wheels are stiff, and they track well with no obvious flex under braking or cornering. I had the opportunity the following day to hoik one of the Synapse test bikes up the Teton Pass (2,570m) and then fling it back down as fast as gravity-versus-wind-resistance would allow. I topped out at 97.8km/h on the downhill, a new personal best, so I think it's fair to say that the tyres roll pretty well on the blacktop. At 1,620g (claimed) the wheels are a good weight too; certainly they didn't feel like the limiting factor when I was gasping for breath on the final approaches to the pass on the way up. 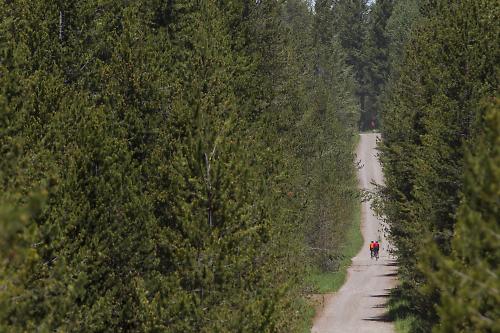 All in all I was very impressed by the Ksyrium Pro Disc Allroad wheels, and the Yksion Elite Allroad tyres. Mavic sell wheel-tyre systems and specifically design them to work together, so your £750 includes a set of the tyres. There's other tyres – the Hutchinson Sector 28s spring immediately to mind – that would work really well if you're planning to use the wheels for UK lane-bashing rather than actual offroad gravel adventures. Bear in mind that with the 19mm rim, the minimum tyre width you should fit (according to ISO norms) is 28mm. You can go much bigger though, up to 47mm which means that the Allroad wheels could be a good choice for 'cross racing, or bikepacking, or monster cross, or even beach racing. They should be pretty versatile.

First impressions, then, are very good. We'll be getting our paws on a set just as soon as we can (They should be available in the UK from September) and we'll give them a full review in due course.