Back to news
news
Video
Racing 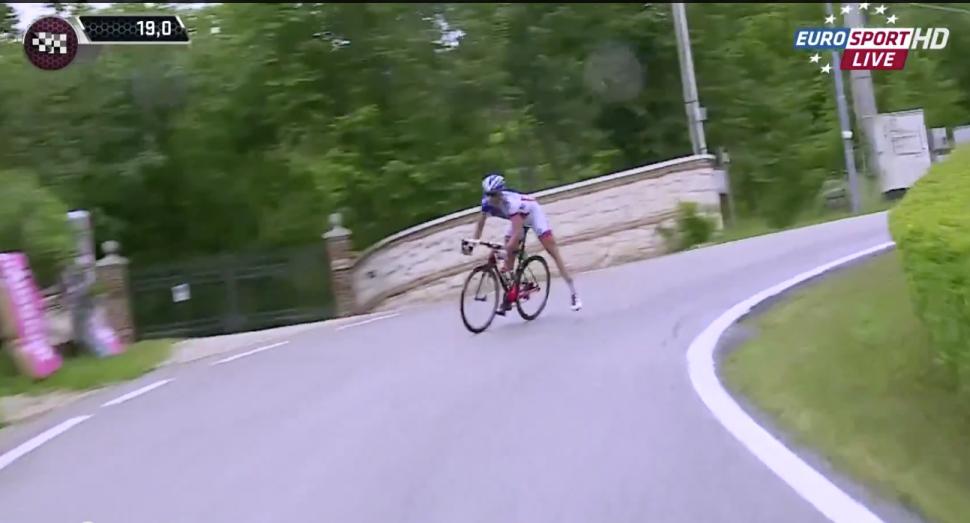 A lesson in how not to descend wet roads

Alexander Geniez shows how not to descend wet roads on stage 12 of the Giro d'Italia...
by Simon_MacMichael

Most of us will have experienced it at some point – a dicey moment on a tricky descent in the wet that results in a sudden loss of nerve. So there’s bound to be a certain amount of sympathy among amateur riders for FDJ.fr’s Alexander Geniez, who had what can only be described as a nightmare on yesterday’s Giro d’Italia Stage 12.

The 27-year-old was out alone at the front of the race on the testing descent from Crosara, struggling to keep upright due to a combination of the filthy weather and a dodgy surface that is far from unusual on Italian back roads.

The Frenchman’s travails caused Eurosport commentator Rob Hatch to observe to Sean Kelly that there was “more clipping and unclipping than on the morning commute,” before the unfortunate rider overshot a corner for good, managing to avoid a family with a child and a man with a dog.

Geniez wasn’t the only rider to have problems on that descent yesterday – others can be seen behind him trying to cope with its problems, while Orica-GreenEdge’s Simon Gerrans crashed, and while he completed the stage he was missing from the start this morning.

In 2013, on another rain-soaked Giro stage, Sir Bradley Wiggins struggled after crashing as the road went downhill.

The then Team Sky rider, who exited the race a few days later with a knee injury, came under criticism afterwards for saying he had descended “like a bit of a girl.”

We have sympathy for poor Alexander Geniez though, descending in any conditions can be fraught with risk. If you're watching that video and thinking you could do with improving your descending technique, GCN has some useful tips to improve your skills and help you descend safely and in control in the video above.