by Laura Laker May 18 2015
36 Comments
Campaigners call for safety review before route opens to the public, over fears for cyclist safety 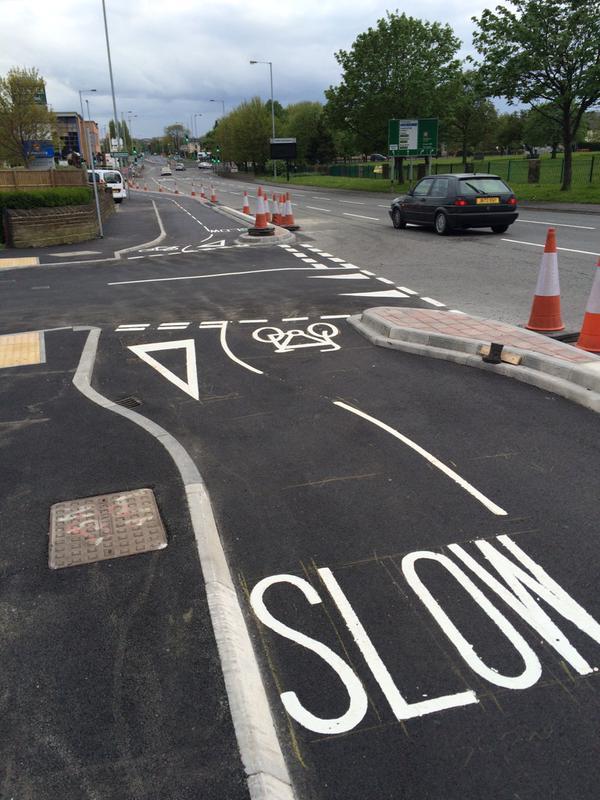 A Bradford cycle superhighway has been slammed for "shockingly bad design", and campaigners are calling for building work to halt for review, after local cyclists discovered the route forces those on bikes to give way to turning traffic from a three lane gyratory.

Photos of the junction of Grange Avenue and Dick Lane in Bradford, part of a 14 mile superhighway linking Leeds and Bradford paid for by a £18.1m cycle city ambition fund, were shared by local cyclist, posting as @d0tdash on Twitter.

Local and national campaigners have joined in their condemnation of the design, which some say is among the most dangerous cycle infrastructure as it gives no legal protection for cyclists at side roads. Others feel work should stop for review before it opens to the public.

An Alternative Department for Transport blog post, titled Bradford's Cycle Super Deathway, said: "The junction is dangerously designed – turning motor traffic has priority over the cycleway at side roads. The junction is unclear, people on foot and on bike are expected to look left as well as backwards to the right, simultaneously, and so the design is dangerous."

"Nobody wants cycleways like this. They don’t suit the fit and confident, and they fail the rest of us. They’re crap, and they’re dangerous."

Is there a good reason for the superhighway not to have priority here @CityConnect1? Via @d0tdash @CTC_Cyclists @LeedsCyclists

Some question whether designs were changed from the original plans, without campaigners' knowledge. Plans published at the cycle city ambition fund bid stage show the segregated two way route alongside the three lane gyratory, where side roads have a mix of treatments, from cycle lanes across the junctions, to only raised tables, but it could appear from designs at the Grange Avenue junction with Dick Lane nothing further than a raised table was ever proposed by way of priority.

The two-way segregated cycle route is also criticised for being too narrow, where there is plenty of space on the wide road, with sharp kinks at junctions which riders fear could cause crashes in the dark. The Alternative Transport blog calls on construction to be put on hold and "a thorough appraisal made before it is open for use by the public".

In 2014 cyclist Henry Lang was killed while crossing a side street on a similarly-designed cycle route on a six lane dual carriageway in Twickenham, where a verdict of accidental death was recorded. The driver of the dustcart, turning from the A318, did not give way when Lang crossed the side street, crushing him under the vehicle's rear wheels.

Writing on the Twickenham fatality the London Cycling Campaign has pointed out that though the Highway Code says when turning, you must give way to any vehicle using a bus or cycle lane from either direction, that this design and thousands like it remove that formal priority.

It said on its website: "Unfortunately that [Twickenham] layout was seen as a safe design without realizing that it requires cyclists to give way to faster traffic overtaking them from behind. The latest advice from the London Cycle Design Standards says the priority at this sort of junction should be reversed to reduce danger and 'to offer the highest level of service for cyclists'."