Back to news
news
Collision
Video 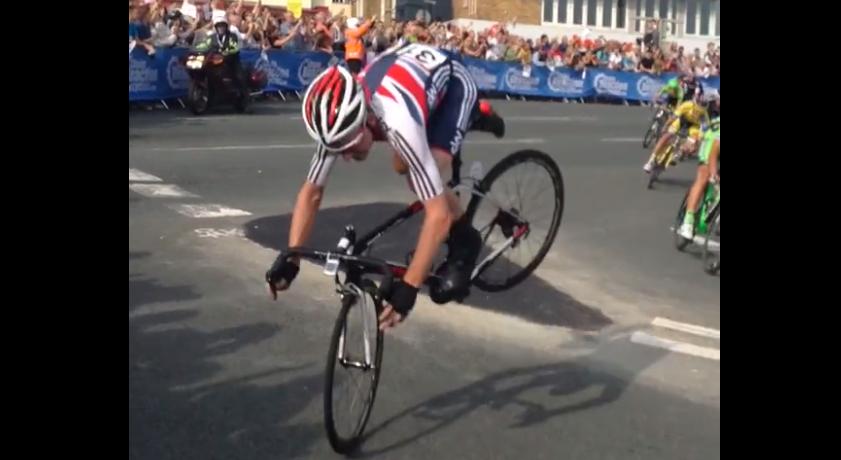 It's been a while since we blessed you lovely road.cc readers with a video round-up. So to make up for it, this edition is stocked full of juicy Tour of Britain crashes, and much more, for you to sink your distracted teeth into.

Following a round of professional cyclist crashes, and a little behind-the-scenes bit from Madison-Genesis at the Tour of Britain, we head to soggy London as a cyclist on CS7 comes very close to meeting a sticky end under city centre traffic.

As well as the usual rush hour mayhem and crashes, we've got some quirky jazz wheel building, some totally relevant* teddy bears, a bit of valve ingenuity and the uplifting tale of Italian paracycling champion, Alex Zanardi.

*may not be relevant

It seems that no pro cycling race on British soil is complete without a Mark Cavendish crash, these days. But the Omega Pharma-Quick Step rider wasn't the only one eating asphalt at this year's Tour of Britain.

Cav's fall on stage one of the Tour of Britain didn't garner as many column inches, or hit as many headlines as his high profile crash at the Tour de France in Yorkshire, but it was caught on camera nonetheless.

Cav managed to recover to the peloton, but crossed the line in third behind Marcel Kittel and Nicola Ruffoni.

On to stage five, and Team Sky rider Sebastian Henao misjudges a corner in Exeter, resulting in him colliding with the fencing. Fortunately, he was okay and made it across the line in 85th place for the day.

Stage seven now, and Tao Geoghegan Hart's break comes to a flying end, straight into the barrier. We've got two angles of the spectacular crash from which he got up and finished the stage. They're hard, these cyclists.

Madison-Genesis behind the scenes

Taking part in a nine-stage race is no mean feat. Madison-Genesis give you an insight into their preparations and in-race procedure through a series of videos during this year's Tour of Britain.

Madison Genesis - Tour of Britain 2014 Behind the Scenes Video: Part One from Madison on Vimeo.

Alex Zanardi’s former Formula 1 career came to an end after he lost both of his legs in a near fatal accident while racing in 2000.

This short intimate window into the Italian’s world is inspiring, and epitomises the optimism of the man in its closing statement:

“I’m Alex Zanardi, I’m a lucky person, because at the age of 47, things are not over yet.”

TOUCH THE SKY from tim hahne on Vimeo.

The chances of being robbed at gunpoint while cycling on London’s streets are pretty low, cyclists in the capital still have plenty of dangers to be wary of.

Here, a group of commuters are cycling on one of London’s blue Barclays Cycle Superhighways on a wet afternoon, making conditions slippery, and adding manhole covers to the list of hazards to be aware of.

The cyclist following the filming rider falls - seemingly of his own accord, highlighting the danger of wet roads - and almost finds himself underneath traffic travelling in the opposite direction. Fortunately, no-one was seriously hurt.

This particular video has none of the above, however, it’s a rare example of confrontation in Canada, a nation renowned for its politeness and understanding, caught on camera.

In the video you’ll see a young driver knocking cyclist Ben Koker off his bike after running a stop sign. True to Canadian form the driver is quick to apologise and acknowledge his guilt, and offers no argument once a police officer gets involved.

We’re not ones to conform to national stereotypes here at road.cc, but we’ve seen enough road ragey videos to make a guess that incidents like this one, should they take place somewhere like London, don’t often end quite so amicably.

Now we go from a very understanding pair of Canadians, to a sneaky German… erm, prankster. Humour can be a very culturally subjective thing, and apparently some people in Germany think this is funny. We're not convinced, but see what you think.

Bearing all the hallmarks of a growing breed of controversial YouTube pranksters, this individual appears to be playing a geisterfahrer prank. A prank which appears to be contained to German borders for the time being, most cyclists will probably hope it stays there.

Translating to ghost rider, this geisterfahrer prank apparently involves riding on the wrong side of a cycle path and shouting "geisterfahrer" at unsuspecting cyclists upon appearing from behind a blind corner. Your sides are probably splitting already and you haven't even seen it yet.

We don't know whether this prank involved a ghoulish outfit, or if there are other examples of ghost rider pranksters out there. We’ll certainly be keeping our eyes peeled, just in case this becomes one of those internet fads. Boo.

Words that spring to mind when you hear the words rush hour? Here at road.cc we got: mayhem, confusion and frustration.

After filming one intersection, and weaving a bit of After Effects magic, film production company Black Sheep Films, have shed an entirely different light on the time of day which cyclists consider most hazardous.

A busy intersection suddenly looks like coordinated brilliance, all of the while hovering half a step away from absolute carnage. If only things could run this smoothly in the real world.

After watching the Rush Hour video above, we couldn’t help but be reminded of this mildly relevant, completely cycling related (see the title), video filmed on Worthing sea-front.

Employees at Japanese bicycle shop Blue Lug make their wheels to double bass-heavy jazz music, according to this video.

Blue Lug may well be likening wheelmaking to playing jazz music, a concept which we find strangely compelling, but really we're not sure how we’d feel about riding on such smooth unpredictability.

Presta tube valve adaptors for everyone

We’ll swing from wheel jazz, to some literal wheel improvisation.

Stuck with a flat Presta valve tyre that needs inflating, but your portable bike pump is nowhere to be seen?

Worry no more. You can create an adaptor for your Presta tyres by simply chopping the top of the valve’s protective cap off and popping it onto your valve upside down.

Your tyre, as per the video, will now accept mechanised bike pumps, just like those you can find at petrol stations.

To finish off this video round-up, here are two examples of awful driving that we’ve come across this week.

When the Tour de France came through Essex last month, raising cycling's profile, we would have hoped that drivers in the area would go on to give cyclists a little more respect on the road.

But alas, it seems nothing has changed.

We’ll continue to highlight shocking pieces of driving like this in our round-ups, in the hope that something changes one day and we won’t have to.